4 ways values can elevate you as a leader at work

To become a leader, you don’t need to be a selfish creature and step on the toes of others at work! Know how your righteousness, too can serve the purpose. 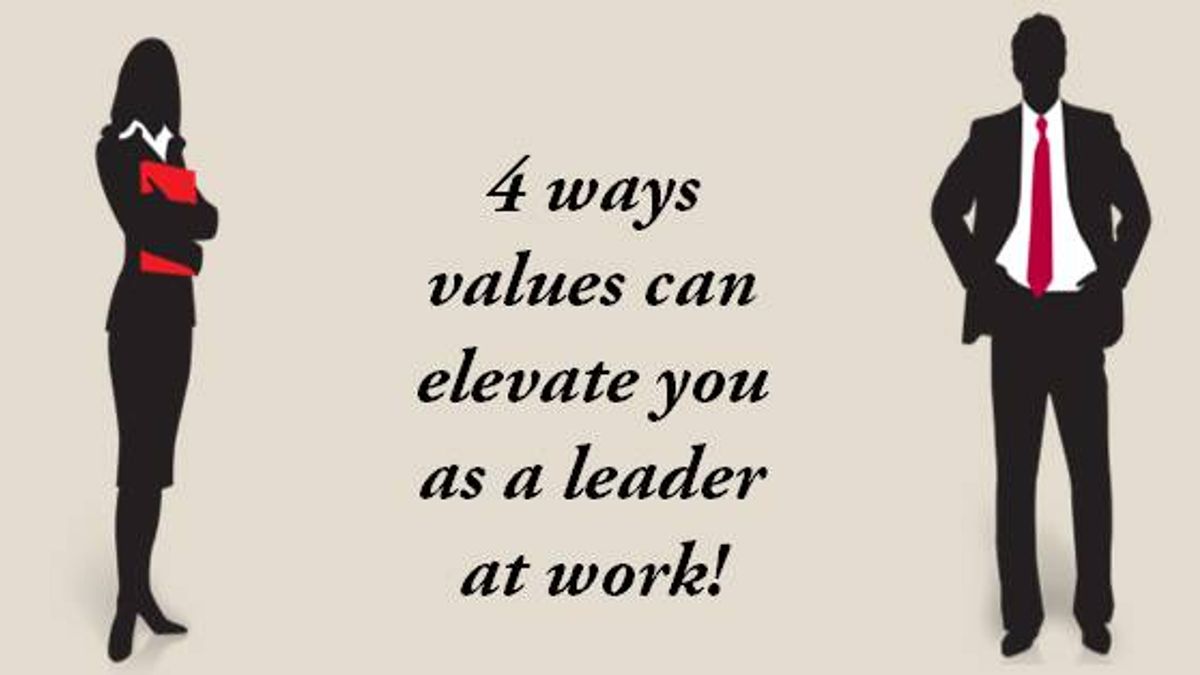 4 ways values can elevate you as a leader at work

Do you want to become a leader but don’t know if you can achieve anything without compromising your values at work?  Seriously, it’s a stressful question! And, it disturbs the routine life and causes restlessness; especially when it comes to the minds of those working professionals who have nothing excepting some moral values such as honesty, hard work, helping nature, and positivity to offer. In common notion, these values are helpless and ineffective. For success in the corporate world, one needs to step on the toes of others to get ahead in a corporate company. But, you don’t need to worry about this popular belief about the success because the values such as honesty, helping nature, hard work, and positivity have always been valued and rewarded every time. It won’t only help you to become a leader but would also pursue others to respect you. But for it, you must know how your values can elevate you as a leader. In this article, we will explain the same which can help you become a leader at work.

Be honest at work

There is no substitute for honesty. And if you’re an honest worker and doing your work with honesty, then there is no substitute for you as well. Actually, every employer is always on a lookout for honest workers who take their job responsibilities as their moral obligations and can fulfill their moral obligations through their honest efforts. Without the honest effort of the workers, not a single employer or company can imagine the growth and success of his/her organization. Therefore, honesty is precious to the success and growth of your company as well as to your employer. The only thing that you need for your growth and success is that you don’t compromise it at any cost. Once your employer realizes your honesty, he/she begins to look for the ways to give you leading role in his/her organization. It would also help you to build an image as an honest professional which could pursue others to respect you at work.

Be a hard-worker at work

Hard work is a key to success. There is nothing to replace it. Imagine you stop to work hard in order to upgrade yourself with new technologies when you become efficient in a particular set of tasks. It might obstruct the success of your company as well as yours if the technology you currently know and use at work turns useless and obsolete in the industry where you work. For the betterment of your professional life, you must simply be able to contribute to the growth and success of the company. And, developing new abilities always require efforts and hard work. Therefore, hard work is a never-changing basic tenet for success. Once your employer realizes that you’re working hard for the company, he/she begin to look for a chance to promote you as a leader.

Be an altruist at work

Don’t be a self-centered colleague, worker or a professional at work. People around you are observing you if you tend to make effort only for your own benefits. Once they consider you as a self-centered or a selfish colleague, worker or professional, it will take must of time and effort to re-build your image among them. So, be an altruist and begin to make efforts in order to help people around you. It would pursue your team members and manager to thinks positively about you which could create a positive environment for the company as well as for you to thrive in. But, don’t stop to help other after being promoted as a leader because it’s the only value which can take you to the next horizon of success.

Be positive at work

To bring about any positive changes, you must be a positive professional at work. Not only when the things are going in right direction and situation is in under control but also in the difficult situations. In fact, the difficult situations are litmus tests; especially for the patience and resourcefulness of those who want to become a leader at work.And, the employer or management of the companies become more observant to the reactions of their workers when the companies go through such situations. If you aren’t positive, then you cannot be resilient and resource. Resourcefulness and resilience somewhere depend on how positively you’re taking particular situation. So, be positive especially when you face difficult situations at work. It would help you face and overcome the problems and challenges at work which could help build a road to growth and success for you in an organization.

In the end, the image matters; especially when it comes to achieving some certain targets in professional life. But it’s difficult for one to build such an image which can pursue the co-workers, manager or employer to think in a direction to promote him/her. Under such situation, some behavioral qualities such as hard work, honesty, positivity, and helping nature can serve the purpose. In this article, we have talked about these values at length which can help you to become a leader at work.