Couldn’t you easily catch liars at work? Know the signs which indicate you about a person is lying. 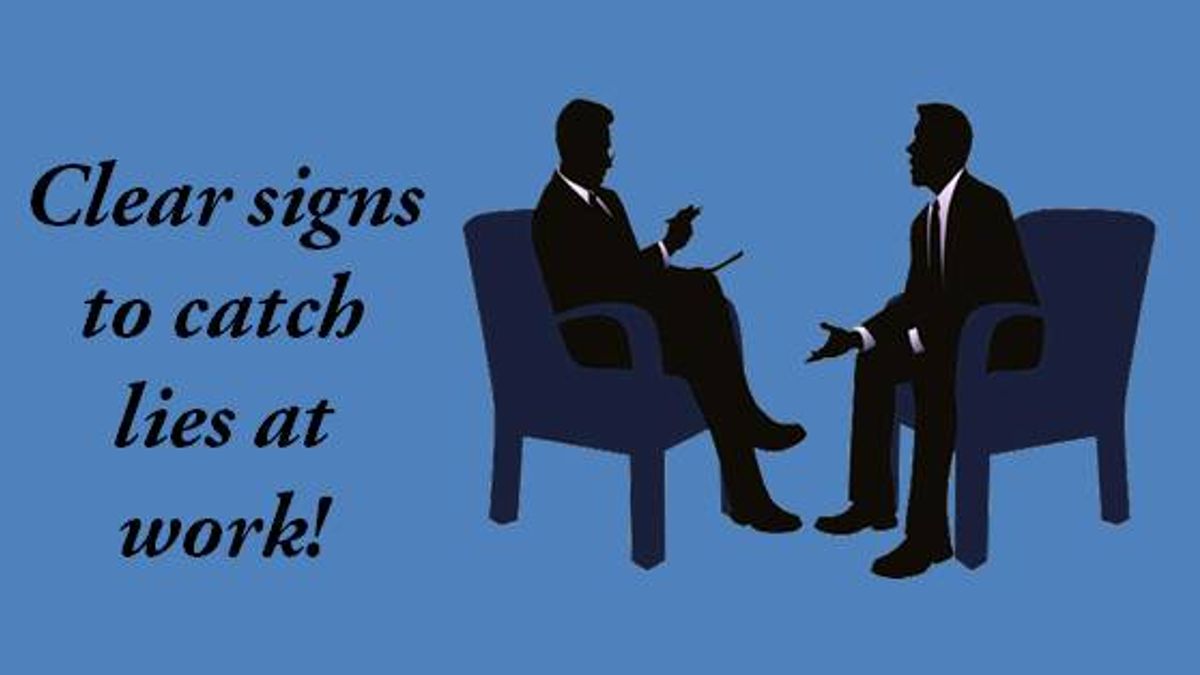 5 signs to catch lies at work

Could you easily catch when anyone tries to fool you? It’s normal but harmful, because it might badly affect your professional life if you couldn't catch lies and liars at work. We often see professionals lying to their co-workers and seniors just to escape themselves when they are questioned about some particular project, tasks, or assignments. It misguides and leads the person who is been lied into the wrong direction. And, making efforts in the wrong direction culminates into failure for which they are solely held responsible and sometimes removed from the organization. You might have to face the same if you couldn’t catch a liar team-member and his lies. Though there is no lie detector which you can always carry along and detect lies, there are some signs to sniff if there is anything fishy. In this article, we will examine the signs which can help you to detect lies at work.

Everyone needs to breath properly while speaking anything to anyone; especially in a long and lengthy course of the talk. For it, mind signals body whenever it requires to exhale or inhale. But, this process breaks down when someone lies or tries to fool anyone which ultimately causes breathlessness or uncomfortable breathing. It’s the most common sign that often occurs when someone lies or make excuses. So, observe closely whether the speaker is comfortable at breathing or not while interacting with any of the co-workers regarding a particular task. It would help you to catch him/her if he/she tries to fool you.

Normally, everyone avoids repeating words or phrases when they have substantial or genuine information regarding a particular event. But, they try to justify their points, information, or knowledge by vehemently repeating themselves when they feel they are lacking something important. It happens; especially when a professional is questioned by his seniors or co-workers. You can take the help of this sign to detect a lie if any of your co-workers tries to fool or misguide you at work.

You may have seen people fumbling and avoiding to speak anything in the videotaped interrogation of a suspect who is guilty.  It happens when stress causes the automatic nervous system to decrease salivary flow. Eventually, it dries out the mucous membrane of the mouth which don’t allow one to speak, comfortably. With this effect, people begin to refrain from speaking when they are under stress. So, when anyone of your colleagues replies your queries regarding a particular project observe whether he/she is really willing to speak or not.  And, be more cautious and careful if he/she avoids speaking. It would help you to detect the lies at work.

While the frank and honest people occasionally break eye contact and even look away from time to time, liars tend to stare for manipulation and control. In general, liars don’t pay attention to maintain eye-contact but when they intentionally want to manipulate and fool someone, they become more cautious and try to stare with their unblinking eyes while speaking. So, observe the eye-contact and detect if it isn’t normal. It would help you to know the fact which could help you escape the consequences.

It’s the most common sign that emerges when someone lies or tries to misguide; especially the co-workers and seniors at work. Generally, a frank and honest person speaks or talks fearlessly when they are engaged in a course of talk at work. But, the liars try to maintain secrecy fearfully which leads them into a state of nervousness. So, take note of this sign; especially while talking with anyone of your juniors, colleagues or seniors. It would help you to know the truth that could guide you to know the right direction.

For growth and survival in the corporate world, everyone needs to justify his/her position, job or role. It is not easy; especially when people working around lie, just to escape themselves. A wrong information or knowledge may misguide you which ultimately damage and put your role to the question. Simply, you must be able to detect lies and catch liars. For it, you can observe signs of uncomfortable breathing, repeat of sentences or words, refrain from speaking, unblinking eyes, and nervousness which will help you to detect lies and catch liars at work. In this article, we have explained about these signs which can help you at work.