Read the CAT exam analysis Slot 2 from TIME that was conducted during the afternoon on 29th November 2020. Get complete information about CAT section-wise analysis and expected cut-off here. 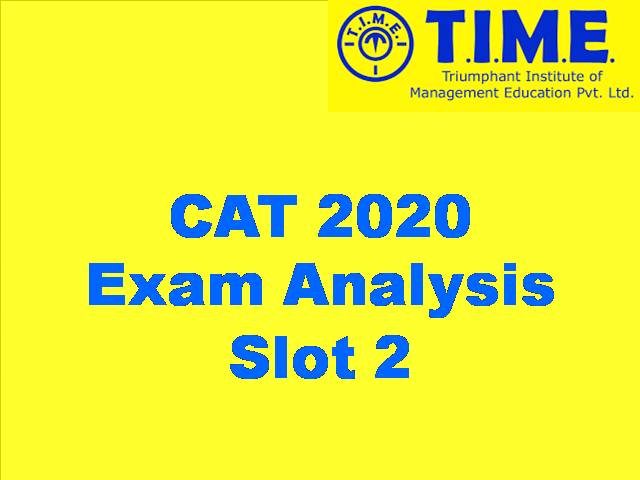 With the change in the number of slots and the reduction in the duration of the exam in CAT 2020, most of the candidates would have expected a change in the CAT 2020 exam pattern as well.  The takers of the CAT 2020 afternoon slot would have gone in with the slight advantage of having received some information from the morning slot and about the number of questions to expect in the MBA entrance exam which the highly anticipated thing for the aspirants of morning slot.

On expected lines, having known about the morning slot, the number of questions in the exam were reduced, to 76, from 100 in the previous years’ papers. So Read the CAT 2020 exam analysis and find out all the new facets of the exam and section-wise analysis of each section:-

The split of questions across the three sections are:

The passages in the RC section dealt with the topics of Artists’ Evaluation, Viability of Renewable Energy, Pirates of the Sea and Analysis of Aggression.

The passage on Viability of Renewable energy was probably the easiest passage in the paper. It was readable and the questions did not throw too many curveballs. The straightforward passage and questions make this a Moderate passage.

The passage on Pirates of the Sea draws in the students because it is easy to read. However, the questions forced the students to revisit the passage multiple times to answer the questions. Combined with this, the confusing options also may eat up time in answering questions from this passage. This makes it a Moderate to Difficult passage.

The passage on Analysis of Aggression, even though was not tough to read, had questions which were a little involved. So this passage can be called a difficult passage.

Across all the passages, the options were confusing making rereading a must to be sure of the answer.

In the Verbal Ability, the Para Formation questions were not very challenging, with some questions having connectors and hints to find the correct order of the sentences. Students who do a lot of reading would have been able to notice the stylistic elements in the sentences and solve these questions quicker.

The Odd One Out questions, unlike in the morning slot, were a little tougher than the Para Formation questions.

Two of the three Para Summary questions were doable with the other one being on the tougher side. Also, most of the choices did not completely capture the essence given in the passage.

Overall, the section was similar to that of the morning slot

A net score of 23-25 would be a decent score for a test-taker to be able to get 85 percentile (sectional cut-off).

The DILR section was of a higher difficulty level compared to that of CAT 2019, similar to what we have seen in the morning slot. Unlike in the morning slot, every set would have posed some challenge to the students. The sets which appeared doable at first glance had some additional information in the questions, which made them difficult to solve in its entirety.

While there was one doable set in the morning slot, down from at least two easy-moderate sets last year, it can be said that there was no such set in the afternoon slot for LRDI. The remaining sets were challenging and there were no low hanging fruits among these sets.

The set on Elections and Voters presented a lot of data and comprehending the data will take a lot of time. In addition to this, the number of criteria and dimensions to the set makes it even more difficult. On top of this, the data was not presented completely and required some reasoning on part of students to arrive at the solution. However, this set need not be solved completely to answer all the questions. In fact, a couple of questions can be answered without filling the table completely, which not many would have found. This is a very difficult set. Attempting this set would have taken a lot of time and students should have left this set for last.

The set on Beads, on first glance, looked similar to a Sudoku puzzle with a 5 x 5 grid. The questions involved counting the number of possibilities given certain additional conditions. Solving the questions, students might be confused whether they were solving a DILR set or a P&C question. Since each question must be solved independently, this is a Very Difficult set. Given that this is only a 4-question set and is very difficult, students should not have attempted this set, unless they have finished solving all the other sets.

The set on Sales at a store is a DI set based on Quant concepts. This set involved a little reasoning and as has been the case with other sets, the questions have to be solved independently. The set was on the difficult side.

The set on Parking Slots had so much information that the students needed to process, which pushed the difficulty level up.

The details of the sets in the section are given below:

A net score of 16-18 would be a decent score for a test-taker to be able to get 85 percentile (sectional cut-off).