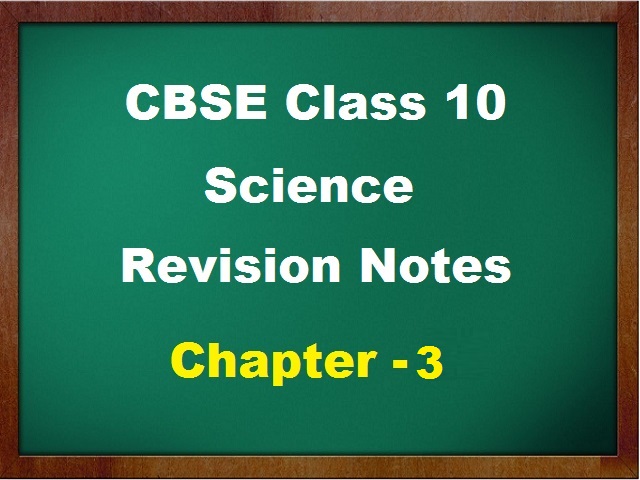 Check quick revision notes for CBSE Class 10 Science Chapter 3 - Metals And Non-metals are prepared by subject experts. These notes have been prepared entirely according to the latest syllabus of CBSE Class 10 Science for new academic session 2021-2022. You may revise the whole chapter in a very short time. You may also attempt the questions given at the end of the notes for a quick self-assessment.

(i) They are lustrous, i.e., they have a shiny surface.

(ii) All metals are solids except mercury which is liquid at room temperature.

(iii) Metals are ductile which means they can be drawn into wires.

(iv) Metals are malleable which means they can be beaten into sheets. The only exception is mercury.

(v) They are good conductors of heat and electricity except lead and mercury.

(vi) They have high density and high melting point except alkali metals like lithium, sodium, potassium are so soft that they can be cut with a knife.

(i) They are non-lustrous and have dull appearance except graphite and iodine that are lustrous.

(ii) They are generally soft, except diamond.

(iii) They are non-ductile.

(iv) They are non-malleable.

(i) Metals react with air or oxygen to form metal oxide.

Metals such as potassium and sodium react so vigorously that they catch fire if kept in the open. Hence, to protect them and to prevent accidental fires, they are kept immersed in kerosene oil.

Amphoteric oxides:  Some metal such as aluminium oxide, zinc oxide can react with both acids and bases to produce salt and water. Such oxides are known as amphoteric oxides.

(ii) Most metal oxides are insoluble in water but some of these dissolve in water to form alkalis (metal hydroxides).

# Metals like potassium and sodium react violently with cold water. The reaction is so violent and exothermic that the evolved hydrogen immediately catches fire.

# The reaction of calcium with water is less violent. Calcium starts floating because the bubbles of hydrogen gas formed stick to the surface of the metal.

# Magnesium does not react with cold water. It reacts with hot water to form magnesium hydroxide and hydrogen. It also starts floating due to the bubbles of hydrogen gas sticking to its surface.

# Metals like aluminium, iron and zinc do not react either with cold or hot water. But they react with steam to form the metal oxide and hydrogen.

Reaction of metals with solutions of other metal salts

○ Metals such as potassium and sodium react so vigorously that they catch fire if kept in the open. Hence, to protect them and to prevent accidental fires, they are kept immersed in kerosene oil.

○ At ordinary temperature, the surfaces of metals such as magnesium, aluminium, zinc, lead, etc., are covered with a thin layer of oxide. The protective oxide layer prevents the metal from further oxidation.

○ Iron does not burn on heating but iron filings burn vigorously when sprinkled in the flame of the burner.

○ Copper does not burn, but the hot metal is coated with a black coloured layer of copper(II) oxide.

○ Silver and gold do not react with oxygen even at high temperatures.

(i) Non-metals reacts with oxygen to form non-metal oxide.

(ii) Non-metals do not react with water and acids.

The reactivity series is a list of metals arranged in the order of their decreasing activities. 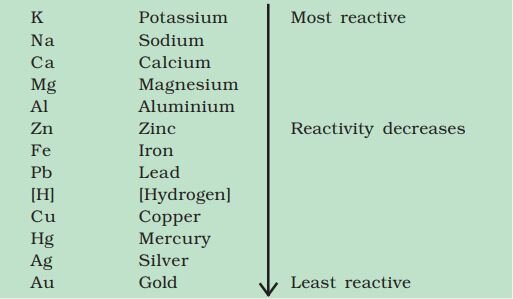 Sodium and chlorine react with each other to form sodium chloride. 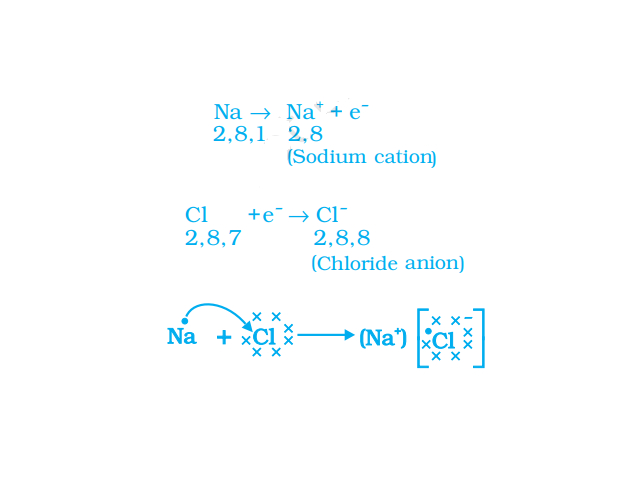 (i) Ionic compounds are solids and are hard because of the strong force of attraction between the positive and negative ions.

(ii) These compounds are generally brittle.

(iii) Ionic compounds have high melting and boiling points. (because a large amount of energy is required to break the strong ionic bonds).

(iv) They are generally soluble in water and insoluble in solvents such as kerosene, petrol, etc.

Topics deleted from the chapter are:

Metals are generally found in the earth’s crust.

→ The elements or compounds which occur naturally in the earth’s crust are called minerals.

→ The minerals from which a metal can be profitably extracted are called Ores.

Metals are categorised into three parts:

(i) Metals of high reactivity

The extraction of a metal from its ore involves three major steps:

Step 1 - Concentration or enrichment of ore

A summary of steps involved in the extraction of pure metal from ores is explained in the following diagram: 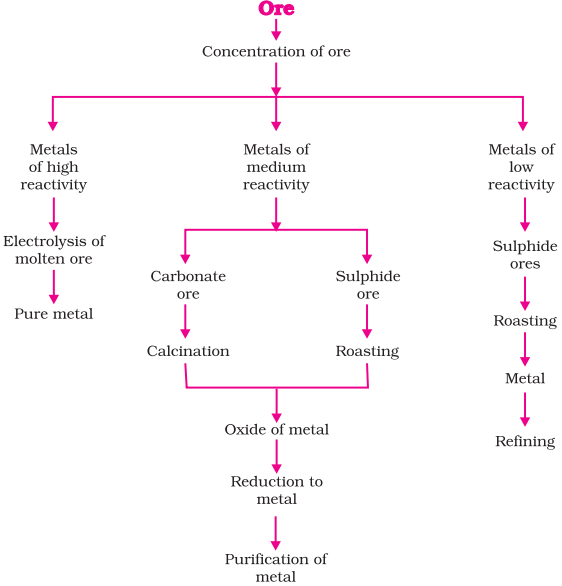 1. Enrichment of ores: In involves removal of impurities, such as soil, sand, etc. from mined ores.

* The impurities such as soil, sand, etc., are called gangue.

The processes used for removing the gangue from the ore are based on the differences between their respective physical or chemical properties.

Some of the process applied for concentration of ores include gravity separation, electromagnetic separation, froth flotation process, etc.

2. Extraction of metals from their ores

For example: Cinnabar (HgS) which is an ore of mercury is first converted into mercuric oxide (HgO) on heating in air. Mercuric oxide is then reduced to mercury on further heating.

(ii) Extraction of metals in the middle of the activity series:

The metals in the middle of the activity series such as iron, zinc, lead, copper, are usually present as sulphides or carbonates in nature.

Thus extraction of metals from the concentrated ores

The highly reactive metals such as sodium, calcium, aluminium, etc., are also used as reducing agents because they can displace metals of lower reactivity from their compounds.

These displacement reactions are highly exothermic. The amount of heat evolved is so large that the metals are produced in the molten state.

Thermit reaction: This is the reaction of iron(III) oxide (Fe2O3) with aluminium which is used to join railway tracks or cracked machine parts.

Q. Give an example of a metal which

(a) is the best conductor of heat.

(b) is a poor conductor of heat.

Q. What is thermite reaction? What is its application?

Q. A solution of copper sulphate was kept in an iron pot. After a few days, the iron pot was found to have a number of holes in it. Explain the reaction and write the chemical equation for the same.

Q. An element forms an oxide A2​O3​ which is acidic in nature. Identify A as a metal or non-metal.