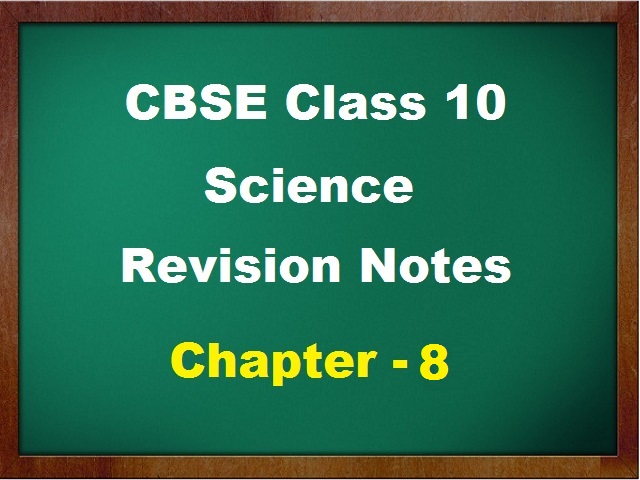 Revision Notes for CBSE Class 10 Science Notes for Chapter 5 How Do Organisms Reproduce:

→ The basic event in reproduction is the creation of a DNA copy. Cells use chemical reactions to build copies of their DNA.

→ The process of copying the DNA may have some variations each time. As a result, the DNA copies generated will be similar, but may not be identical to the original.

Importance of copying of DNA during reproduction

The copying of DNA during reproduction is important because:

(i) It's helps in transferring of characters from parents to offspring

(ii) It maintains the characteristics in different generations of the species.

(iii) It also produces variations which are useful for the survival of species for long time..

What is the importance of variation?

(i) Variation helps organisms to adapt to the changes in environment.

(ii) It contributes to evolution

(iii) It is the basis of heredity.

(iv)  It helps species to be resistant to diseases.

It is mainly of two types:

(i) Fission: In this the parent cell divides into daughter cells.

→ Binary fission: When the fission results in two daughter cells, it is binary fission. For example - Amoeba and Paramecium.

Reproduction in amoeba: When the amoeba cell reaches its maximum size,  then first the nucleus of amoeba lengthen and divide into two parts following the division of cytoplasm of parent to form two smaller daughter cells .

→ Multiple fission: When fission results in many daughter cells, it is called multiple. For example - Plasmodium.

Reproduction in plasmodium: During unfavourable condition a cyst or protective wall is formed around the cell of plasmodium. Inside the cyst, the nucleus of cell splits several times to form many daughter nuclei. Each daughter nuclei is surrounded by the cytoplasm collected inside a thin membrane. Thus, a number of new daughter cells are formed within the cyst. When the favourable conditions arrive the cyst breaks open and daughter cells are released each forming a new organism. 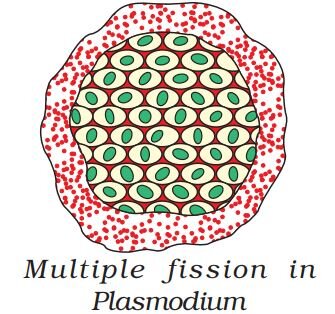 (ii) Fragmentation: In multi-cellular organisms, the organism breaks-up into smaller pieces upon maturation, each piece develops into new individual. For example - Spirogyra. 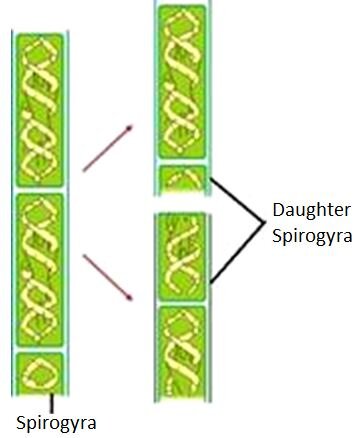 (iii) Regeneration: In this, a few organisms may give rise to new individual organisms from their body parts. For example - Hydra and Planaria. 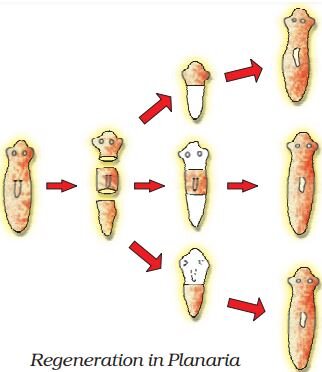 (v) Vegetative Propagation: It is the method of reproduction in which plants reproduce by their vegetative parts such as roots, stems and leaves.

It is of two types:

(a) Natural vegetative propagation: It can be done by the following methods

Cutting: A small vegetative part of the plant removed by cutting with sharp knife is called cutting. It is then planted in the soil to grow a new similar plant. For example - rose and sugarcane are grown by cutting.
Layering: In this method, a branch of plant is pulled towards the ground and a part of it is covered with moist soil leaving the tip of branch exposed above the ground. After some time, new roots develop and then this branch is cut off from parent plant and it grows into a new plant. For example- jasmine and strawberry are grown by layering.
Grafting: In this method, the stems of two different plant are cut, one with roots and other without roots. Both are joined together and the part with roots is sown in the soil. This results into a new lant that has the characteristics of both the plants.
The cut stem of plant having root is called stock and the cut stem of another plant is called scion. For example- apple and pear are grown by grafting.

In tissue culture, new plants are grown by removing tissue or separating cells from the growing tip of a plant. The cells are then placed in an artificial medium where they divide rapidly to form a small group of cells or callus. The callus is transferred to another medium containing hormones for growth and differentiation. The plantlets are then placed in the soil so that they can grow into mature plants

→ Plants which have lost the ability to produce viable seeds can also reproduce by vegetative propagation.

→ All plants are genetically almost similar to the parent plant.

→ Seedless varieties can be obtained.

(vi) Spore formation: In this method, the parent plant produces a number of microscopic reproductive units called spores closed inside a spore case. When the spore case burst, the spores spread into air. When these air borne spores land on food or soil, they begin to germinate under favourable conditions and produce new plants. For example - Most of the fungi such as Rhizopus ( bread mould)  and non-flowering plants. 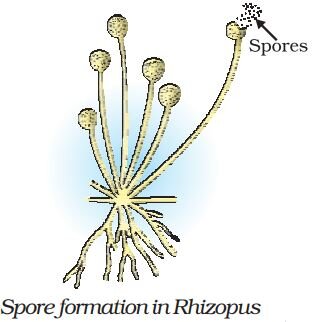 It involves two parents - male and female. A male gamete fuses with a female gamete to form a new cell called zygote. This zygote then grows and develops into a new organism.

Flowers are the reproductive organs of plants. It mainly consists of four parts - sepals, petals, stamen and pistil.

Stamen is the male reproductive part and produces pollen grains that contain male gametes. Each stamen has two parts - Filament and anther.

Carpel is the female reproductive part and produces ovules that contain female gametes. It has three parts - Stigma, style and ovary. 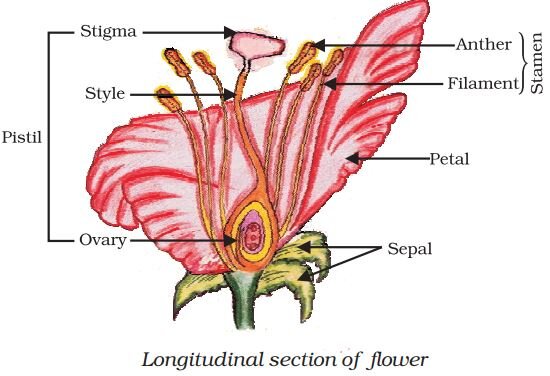 There are two type of flowers:

Unisexual: A flower that contains either male or female reproductive parts. For example -  Papaya and watermelon.

Bisexual: A flower that contains both male and female reproductive parts. For example -  Hibiscus and mustard.

Pollination: Transfer of pollen grains from the anther to the stigma of the flower is known as pollination.

It is of two types:

Fertilization: Fertilization is the process of fusion of male and female gamete to form a zygote during sexual reproduction. 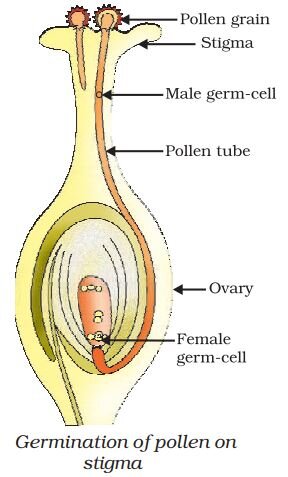 → Pollen grains produced in the anther are transferred to the stigma of same flower or stigma of another flower.

→ The pollen tube enters the ovule in the ovary where the male gamete combines with the female gamete present in ovule to form a fertilized egg called zygote.

→ Zygote divides several times to form an embryo within the ovule. The ovule develops a tough coat and changes into seed gradually.

→ Ovary grows rapidly and changes into a fruit. The other parts of flower fall off.

The remaining part of the chapter will be presented here shortly.