CBSE Class 10 Science Sample Question Paper for Board Exam 2021 is provided here along with the answer hints and marking scheme.

CBSE Class 10 Science Sample Paper for the Board Exam 2021 is available here along with its marking scheme. CBSE sample paper has been released by the board to reveal the format of the question paper for the Class 10 Science Board Exam 2021. This paper also gives an idea about what type of questions can be expected in the exam. On the other hand, the marking scheme is helpful to know how the step-wise marking is followed during the evaluation of a candidate's answer sheet. This marking scheme also includes the suggested answers that help you understand how to include important keywords and concepts in your answers to score maximum marks.

(i) There are total 36 questions divided into four sections A, B, C and D.

(ii) Section - A: Question no. 1 to 20 - All questions and parts thereof are of one mark each. These questions contain multiple choice questions (MCQs), very short answer questions and assertion - reason type questions.

Note: There is no overall choice. However, internal choices have been provided in some questions.

CBSE Sample Paper and Marking Scheme for Class 10 are provided here for free PDF download. So, do not miss to check this sample paper to make a good preparation for your exam and score the desired marks.

1. List any two observations when Ferrous Sulphate is heated in a dry test tube?

Identify the products formed when 1 mL of dil. Hydrochloric acid is added to 1g of Sodium metal?

2. Write the chemical name and chemical formula of the salt used to remove permanent hardness of water.

3. Which of the following is not observed in a homologous series? Give reason for your choice.

a) Change in chemical properties

b) Difference in -CH2 and 14u molecular mass

4. Why does the Sun appear white at noon?

5. Both a spherical mirror and a thin spherical lens have a focal length of (-)15 cm. What type of mirror and lens are these?

6. The image formed by a concave mirror is observed to be real, inverted and larger than the object. Where is the object placed?

Name the part of a lens through which a ray of light passes without suffering any deviation.

7. In the arrangement shown in figure there are two coils wound on a non-conducting cylindrical rod. Initially the key is not inserted in the circuit. Later the key is inserted and then removed shortly after.

What are the two observations that can be noted from the galvanometer reading?

9. Two unequal resistances are connected in parallel. If you are not provided with any other parameters (eg. numerical values of I and R), what can be said about the voltage drop across the two resistors?

10. Veins are thin walled and have valves. Justify.

11. How is the wall of small intestine adapted for performing the function of absorption of food?

Out of a goat and a tiger, which one will have a longer small intestine? Justify your answer.

12. Explain how ozone being a deadly poison can still perform an essential function for our environment. OR Give reason why a food chain cannot have more than four trophic levels.

13. State the role of pancreas in digestion of food.

For question numbers 14, 15 and 16, two statements are given- one labeled Assertion (A) and the other labeled Reason (R). Select the correct answer to these questions from the codes (a), (b), (c) and (d) as given below:

a) Both A and R are true, and R is correct explanation of the assertion.

b) Both A and R are true, but R is not the correct explanation of the assertion.

14. Assertion: After white washing the walls, a shiny white finish on walls is obtained after two to three days.

15. Assertion: Food chain is responsible for the entry of harmful chemicals in our bodies.

Reason: The length and complexity of food chains vary greatly.

Reason: The flow of energy is unidirectional.

Reason: White colour gene is not passed on to next generation.

Answer Q. No 17 - 20 contain five sub-parts each. You are expected to answer any four subparts in these questions.

All living cells require energy for various activities. This energy is available by the breakdown of simple carbohydrates either using oxygen or without using oxygen.

(ii) The graph below represents the blood lactic acid concentration of an athlete during a race of 400 m and shows a peak at point D. 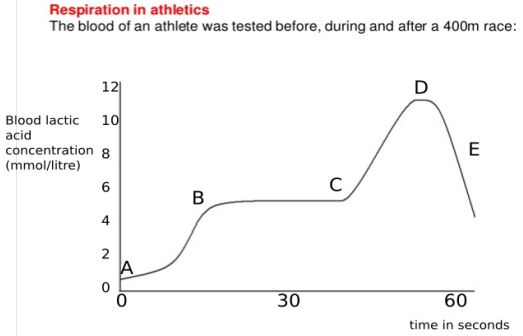 Lactic acid production has occurred in the athlete while running in the 400 m race. Which of the following processes explains this event?

(iii) Study the graph below that represents the amount of energy supplied with respect to the time while an athlete is running at full speed. 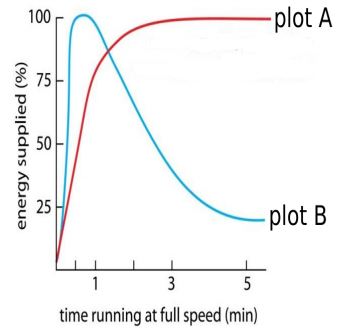 Choose the correct combination of plots and justification provided in the following table. 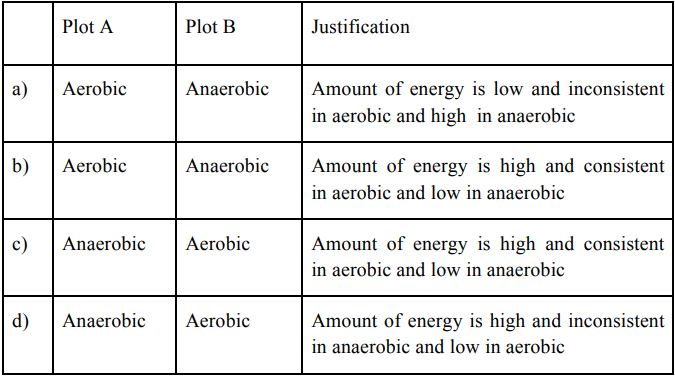 (iv) The characteristic processes observed in anaerobic respiration are

i) presence of oxygen

(v) Study the table below and select the row that has the incorrect information. 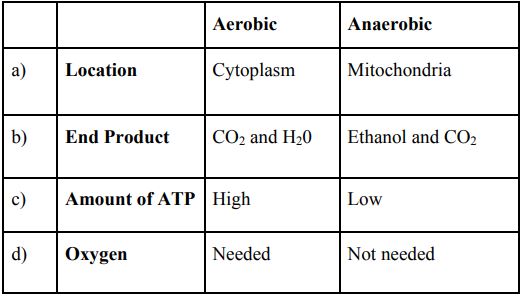 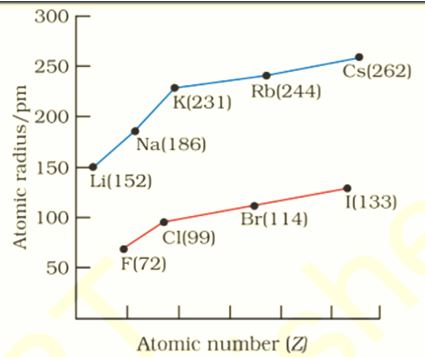 18 (i) Which of the following correctly represents the decreasing order of metallic character of Alkali metals plotted in the graph?

d) as Hydrogen shows the properties of non-metals

18 (iii) Which of the following has highest electronegativity?

18 (iv) Identify the reason for the gradual change in electronegativity in halogens down the group.

18 (v) Which of the following reason correctly justifies that “Fluorine (72pm) has smaller atomic radius than Lithium (152pm)”?

a) F and Li are in the same group. Atomic size increases down the group

b) F and Li are in the same period. Atomic size increases across the period due to increase in number of shells

c) F and Li are in the same group. Atomic size decreases down the group

d) F and Li are in the same period and across the period atomic size/radius decreases from left to right.

The complete sample paper and its marking scheme can be accessed from the links mentioned below: