CBSE practice questions (with answers) for Class 10 Social Science Term 1 Exam 2021-22 include MCQs of different types like case-based, assertion & reason based, competency based and map questions.

CBSE Class 10 Term 1 Exam 2021-22 for major papers will start from tomorrow, 30th November with the Social Science paper. To perform well in their first paper, class 10 students should revise rigorously with the help of sample questions and answers. The CBSE Board has released a set of important practice questions for Class 10 Social Science Term 1 Exam preparations. This includes MCQs based on case study, assertion-reason, pictures and competency-based questions. Questions on map work are also provided here. There are total 60 questions with an answer key at the end. Students may download all the questions and answers in PDF and solve them for last minute revision before tomorrow’s paper.

1. Which set of symbols of nationalism of Europe and their significance is INCORRECTLY paired?

2. Most conservative regimes set up in 1815 imposed censorship laws. Which of the following did they want to control through such laws?

P: what was written about them

Q: the increasing demand for modernising the army

R: the spread of ideas of liberty and freedom reflected in the newspapers

S: the spread of the idea that modernisation could strengthen traditional institutions

3. "When France sneezes," Metternich once remarked, "the rest of Europe catches cold." What did Duke Metternich mean by this statement?

A. France's Bourbon dynasty was the most influential line of kings in Europe.

Why was a customs union or zollverein formed by Prussia and most of the German states in 1834?

A. to abolish state-imposed restrictions on the movement of goods and capital

B. to encourage the state-wise system of weights and measures

C. to import more goods from the landlocked Balkans

D. to boost trade with England and France

Answer: A. to abolish state-imposed restrictions on the movement of goods and capital

4. Which of the following relief features of India possess/possesses the highest reserves of minerals and fossil fuels?

5. Read the passage given below and answer the question that follows.

Jharkhand, Chhattisgarh and Madhya Pradesh are rich in mineral deposits. Arunachal Pradesh has abundant water resources but lacks infrastructural development. Rajasthan is endowed with solar and wind energy but lacks water resources. The cold desert of Ladakh has a rich cultural heritage but it is deficient in water and infrastructure.

Which of the following BEST describes the passage?

A. All regions in India are economically self-sufficient to utilise resources.

B. Only Rajasthan has the scope to utilise renewable resources.

C. India has enormous diversity in the availability of resources.

D. Resource diversity is prevalent only in north India.

Answer: C. India has enormous diversity in the availability of resources.

6. There are two statements given below, marked as Assertion (A) and Reason (R). Read the statements and choose the correct option.

Reason(R): Resource planning helps in effective and judicious use of resources.

A. A is true but R is false

C. Both A and R are true and R explains A.

D. Both A and R are true but R does not explain A.

Answer: D. Both A and R are true but R does not explain A.

7. Who are ineligible to vote in the Presidential elections in India?

A. members of the state legislative assemblies

B. members of the state legislative council

C. members of the Rajya Sabha

D. members of the Lok Sabha

Answer: B. members of the state legislative council

8. “Everything would come to an end if the legislative, executive and judicial powers of government were to be exercised by the same person or authority." - Montesquieu, French jurist

Which of the following is the BEST explanation of this quote?

A. All work in a country will stop in the absence of power-sharing.

B. Separation of powers is needed to strengthen democracy.

C. Governments can only function if powers are distributed.

D. People cannot exist in a nation if powers are not divided.

Answer: B. Separation of powers is needed to strengthen democracy.

9. P) Power-sharing can be vertical as well as horizontal.

Q) All religious communities have reserved seats in the central government in India.

Which of the above statements is/are TRUE?

D. Neither P nor Q is true.

Answer: A. only P

10. Given below is the income distribution of two fictional countries, each with a population of 5 persons. Which of them would have a wide gap between the rich and poor?

D. neither P nor Q

11.Which of the following is NOT a public good?

12. Which of the following gives the CORRECT explanation of Gross Domestic Product?

A. The value of final goods and services is added for secondary and tertiary sectors for one year.

B. The value of every good and service is added up to for all the three sectors for one year.

C. The value of final goods and services is added up for all the three sectors for one year.

D. The value of goods is added for the primary sector for one year.

Answer: C. The value of final goods and services is added up for all the three sectors for one year.

13. Which of the following is an example of the dependency of the primary sector on the tertiary sector?

A. Weavers made less money because the shops did not want to sell hand loom products.

B. The bank employees could not reach on time due to a transportation strike.

C. Diary and poultry producers suffered a loss when the shops went on strike.

D. Farmers suffered a loss when there was not enough water to grow cotton.

Answer: C. Diary and poultry producers suffered a loss when the shops went on strike.

14. Observe the graph given below: 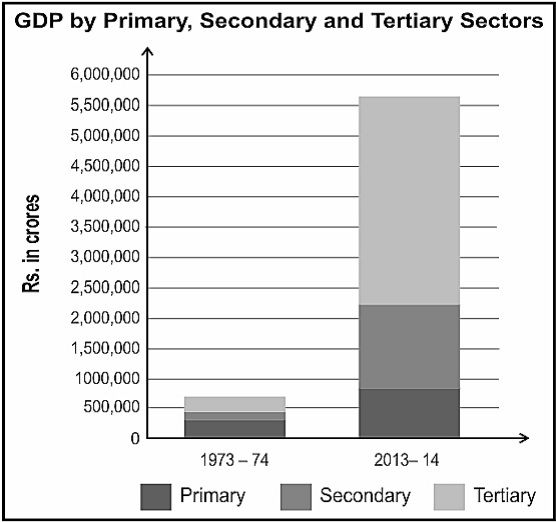 Which of the following statements BEST explains the graph?

15. Read the passage given below and answer the questions 15-19 based on it.

Nationalism, aligned with imperialism, led Europe to disaster in 1914. But meanwhile, many countries in the world that had been colonized by the European powers in the nineteenth century began to oppose imperial domination. The anti-imperial movements that developed everywhere were nationalist, in the sense that they all struggled to form independent nationstates, and were inspired by a sense of collective national unity, forged in confrontation with imperialism. European ideas of nationalism were nowhere replicated, for people everywhere developed their own specific variety of nationalism. But the idea that societies should be organized into 'nation-states' came to be accepted as natural and universal.

Which of the following aligns with the Romantic idea of creating nationalist sentiments among the people?

A. popularising the local folk tales, songs, and plays

B. emphasising the importance of territorial expansion

C. glorifying the developments in science and technology

Answer: A. popularising the local folk tales, songs, and plays

16. Which of the following statements about 20th-century European powers is definitely true?

A. They were involved in the Greek War of Independence.

B. They were actively working for the unification of Germany.

C. They were all working together to end the French revolution.

D. They were fighting against each other in the First World War.

Answer: D. They were fighting against each other in the First World War.

17. Why did the anti-imperialist movements emerge?

A. to oppose colonization

B. to resist European culture

C. to defeat the imperial powers in local elections

D. to protest against trade with European nations

Answer: A. to oppose colonization

A. massive civil unrest due to poverty

B. an attack from the colonized countries around the world

C. the internal struggle amongst nations to expand their territory

Answer: C. the internal struggle amongst nations to expand their territory

19. Observe the map given below which was used during the 19th century to display the power of Britain. 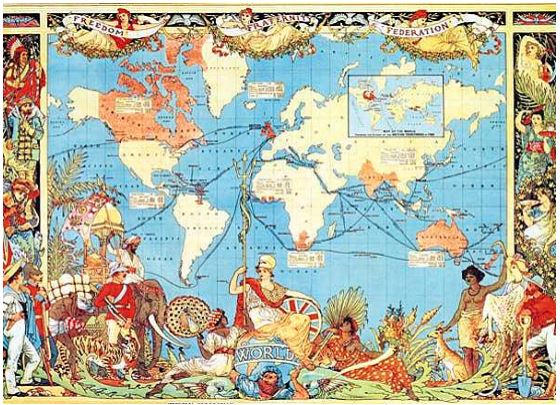 Which of the following is the map MOST LIKELY about?

A. different kinds of people who are found in Britain

B. sea routes from only Britain to different parts of the world

C. celebrating the British rule over different parts of the world

D. people of different countries moving to Britain to lead a better life

Answer: C. celebrating the British rule over different parts of the world

20. Read the passage given below and answer the questions 20-24 that follow.

Political legitimacy arising from active participation of people in grass roots governance is regarded as a litmus test for democracy. On April 24, 1993, India took a decisive step in meeting that objective. The Panchayati Raj Act conferred constitutional status on Panchayati Raj Institutions (PRIs). Though there were long debates on local-level democracy in the Constituent Assembly, in its first 42 years, the republic’s Constitution reposed trust in the twotier form of government — PRIs found a mention only in Directive Principles of State Policy. The Panchayati Raj Act not only institutionalised PRIs as the mandatory third tier of governance, it transformed the dynamics of rural development by giving a say to a large section of the people — significantly, women — in the administration of their localities. Yet, the churn precipitated by the Act has largely remained unexpressed in national-level politics. There are very few channels that connect the grass roots leader to the politics at higher levels.

Why is the active involvement of people in grass roots governance regarded as a decisive test for a democracy such as India?

A. It helps in the mobilisation of people belonging to the country's smallest political unit in decision-making.

B. It ensures equal and optimum distribution of the economic resources of the country among the masses.

C. It generates an interest in the colonial past of the country and aids in the spread of nationalism.

D. It helps in mobilising the local politically charged youth to participate in nation-building.

Answer: A. It helps in the mobilisation of people belonging to the country's smallest political unit in decision-making.

Download the full Question Bank (with Answer Key) from the following link: