The topics covered in this chapter are given below

The Experiments of Faraday and Henry

Discovery and understanding of electromagnetic induction are based on a long series of experiments carried out by Henry and Faraday. 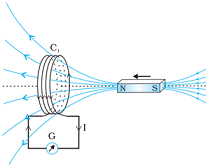 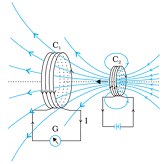 If the bar magnet is replaced by a second coil C2 (as shown in figure given above) connected to a battery. The steady current in the coil C2 produces a steady magnetic field.

If coil C2 is moved towards the coil C1, then the galvanometer shows a deflection. This indicates that electric current is induced in coil C1.

When C2 is moved away, the galvanometer shows a deflection again, but this time in the opposite direction. The deflection will be observed as long as coil C2 is in motion.

When the coil C2 is held fixed and C1 is moved, the same effects are observed. Again, it is the relative motion between the coils that induces the electric current.

Faraday showed that this relative motion is not an absolute requirement. Figure given above shows two coils C1 and C2 held stationary. Coil C1 is connected to galvanometer G while the second coil C2 is connected to a battery through a tapping key K.

It is the number of magnetic field lines crossing any surface normally is called magnetic flux (ϕ) through that surface.

In the case of a closely wound coil of N turns, change of flux associated with each turn, is the same. Therefore, the expression for the total induced emf is given by

The induced emf can be increased by increasing the number of turns N of a closed coil.

The flux can be varied by changing any one or more of the terms B, A and θ.

Lenz’s Law and Conservation of Energy

The polarity of induced emf is such that it tends to produce a current which opposes the change in magnetic flux that produced it.

The negative sign shown in this equation represents this effect.

In the above figure (a), when the North-pole of a bar magnet is being pushed towards a closed coil the magnetic flux through the coil increases. Hence current is induced in the coil in such a direction that it opposes the increase in flux. This is possible only if the current in the coil is in a counter-clockwise direction with respect to an observer situated on the side of the magnet. Vice versa case is shown in figure (b).

Lenz’s law complies with the principle of conservation of energy. Here when the N-pole of a bar magnet is pushed into a coil as shown, the direction of induced current in the coil will act as N-pole. So, work has to be done against the magnetic repulsive force to push the magnet into the coil. The electrical energy produced in the coil as the expense of this work done

Suppose a straight conductor moving in a uniform and time independent magnetic field. In the figure given above induced e.m.f. is given by ε = ‒ [d(Blx)/dt] = Blv {where dx/dt = –v}.