The key notes are as follows

The currents induced in body of a conductor when the amount of magnetic flux linked with the conductor changes.

Some galvanometers have a fixed core made of nonmagnetic metallic material. When the coil oscillates, the eddy currents are generated in the core which opposes the motion & bring the coil to rest quickly.

You must have observed the rotating shiny disc in the power meter of your house. The shiny metal disc in the electric power meter rotates due to the eddy currents. Electric currents are induced in the disc by magnetic fields produced by alternating currents in a coil.

If the geometry of the coil does not vary with time then, d(ϕB)/dt ∝ d(I)/dt.

For a closely wound coil of N turns, the same magnetic flux is linked with all the turns.

Therefore, a term called flux linkage is used which is equal to NϕB for a closely wound coil and in such a case NϕB ∝ I.

The constant of proportionality, in this relation, is called inductance. In inductance depends only on geometry of coil and intrinsic properties of a material.

It is the property of a coil by virtue of which, the coil opposes any change in the strength of current flowing through it by inducing e.m.f. in itself.

Coefficient of Self Inductance

If I is the magnitude of current flowing through a coil at any time, ϕ amount of magnetic flux linked with all the turns of coil at that time, then, ϕ ∝ I or ϕ = L I

If I = 1 then, ϕ = L I or L = ϕ. So, self inductance of a coil is numerically equal to the magnetic flux linked with the coil when unit current flows through the coil.

With slight modification of above formula, one can also say that, self inductance of a coil is numerically equal to the e.m.f. induced in the coil when the rate of change of current through the coil is unity.

SI unit of self inductance is equal to the henry (H).

Self Inductance of a Long Solenoid

If L is the inductance of a long air-cored coil of length l, having n turns per length of cross sectional area A each then, L = μo n2lA

It is the property by virtue of which two closely lying coils opposes any change in the strength of current flowing through the other by developing an induced e.m.f.

If I is the strength of the current in one coil, ϕ is the amount of magnetic flux linked with all the turns of neighbouring coil, then, ϕ ∝ I or ϕ = MI

Where, M is constant of proportionality and is called coefficient of mutual or mutual inductance.

Where, M is a constant of proportionality and also known as coefficient of mutual induction.

Factors affecting Mutual Inductance of a Pair of Coil

• Geometry of two coils such as shape, size, number of turns and nature of material

It is a device which converts mechanical energy into electrical energy. It works on the principle of electromagnetic induction. The main components of AC dynamo are field magnet, armature, slip rings and brushes. 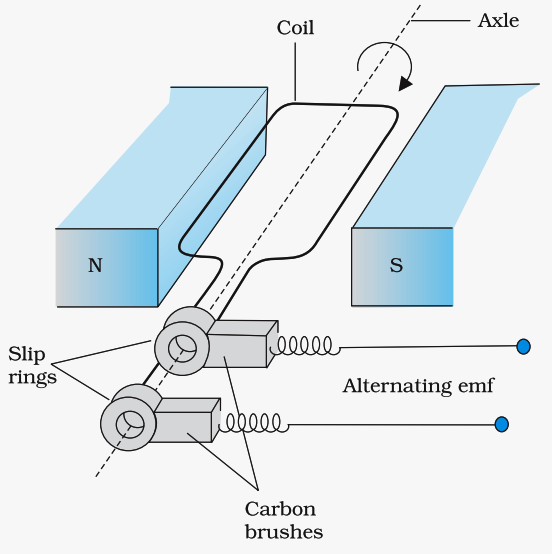 Instantaneous value of induced e.m.f, is by ε = n B A ω sin ω t, where, n is the number of turns of the coil, A is the area of the coil, B is the magnetic field strength. If we denote NBAω as ε0, then ε = ε0 sin ωt.

Since, ω = 2πν, so we can also write can be written as ε = ε0 sin 2π ν t where ν is the frequency of revolution of the generator’s coil. The instantaneous value of the emf and ε varies between +ε0 and –ε0 periodically.