Find revision notes of Chapter-4: Moving Charges and Magnetism based on NCERT class 12 Physics textbook. These notes are very useful for revision purpose before the examination.

This article is a continuation of the revision notes on Moving Charges and Magnetism, Part ‒ I and Part – II. In previous parts, we have studied important topics like, Magnetic field due to a current element, Biot-Savart Law, Ampere’s Circuital Law, magnetic field due to a solenoid and a toroid, Oersted’ experiment, moving charge & magnetic field, Lorentz Force, magnetic force on a current-carrying conductor, motion of a charged particle in a magnetic Field, Cyclotron etc.

In this part we will study some more important topics which are given below: 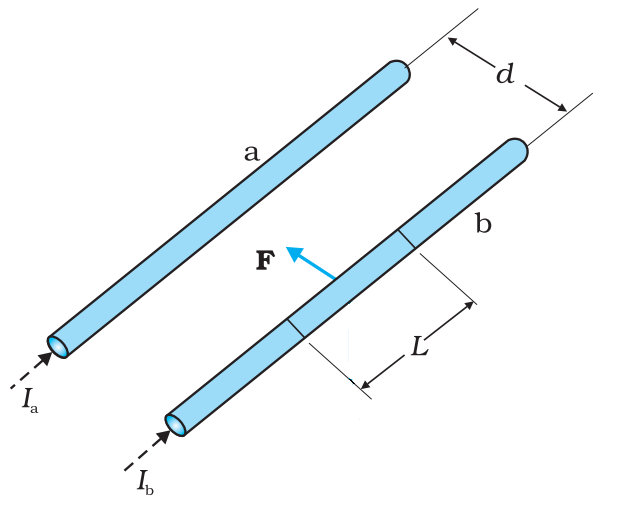 Two long parallel conductors a and b kept at a distance d apart in vaccum and carrying a current Ia and Ib respectively. The force per unit length experienced by each of them is given by

This force will be equal and opposite on both wires.

Nature of force of interaction between the current carrying conductors can be explained on the basis of Fleming’s left hand rule.

Definition of ampere follows from the formula for force between two parallel current carrying conductors.

When 1 ampere each is passing through two long, parallel conductors kept 1 m apart in vacuum, a force of magnitude 2 × 10‒7 N is experienced by a meter length of each conductor.

Torque on a Rectangular Current loop in a Uniform Magnetic Field

A rectangular loop having N turns of area A each, carrying a steady current I and placed in a uniform magnetic field B such that the normal to the plane of the loop makes an angle θ with the direction of the magnetic field B, then a torque τ experienced by the loop whose magnitude is given by, τ = NIAB sinθ.

This equation can be expressed in vector form as shown below:

One can define magnetic dipole moment of the current carrying loop as product of current in the loop and total area of the loop, i.e., M = I (NA).

Any charge in uniform circular motion would have an associated magnetic moment given by,

Potential Energy of a current loop in a Magnetic Field

It is an instrument used for detection and measurement of small current.

The galvanometer consists of a light rectangular coil of N turns each having area A wound on an aluminium frame. 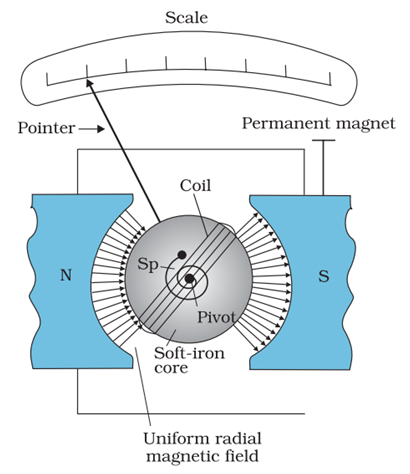 There is a cylindrical soft iron core which is used to make the field radial and also to increase the strength of the magnetic field.

When a current flows through the coil, a torque acts on it. This torque is given by, τ = NIAB where the symbols have their usual meaning.

Since the field is radial by design, we have taken sin θ = 1 in the above expression for the torque. The magnetic torque NIAB tends to rotate the coil. A spring Sp provides a counter torque kϕ that balances the magnetic torque NIAB; resulting in a steady angular deflection ϕ. In equilibrium

Here, k is the torsional constant of the spring; i.e. the restoring torque per unit twist.

The deflection ϕ is indicated on the scale by a pointer attached to the spring. We have

The quantity in brackets is a constant for a given galvanometer.

Sensitivity of a Galvanometer

Conversion of a Galvanometer into Voltmeter 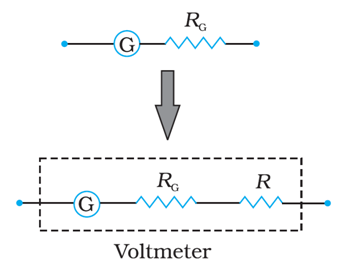 A galvanometer of coil resistance RG, showing full scale deflection for a current IG can be converted into a voltmeter for measuring potential differences having values greater than IGRG by connecting high resistance R in series with the galvanometer where,

An ideal voltmeter has infinite resistance.

Conversion of a Galvanometer into Ammeter: 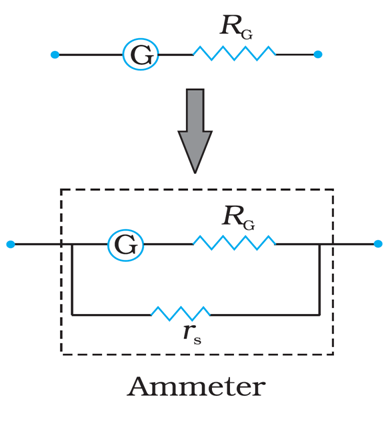 A galvanometer of coil resistance RG, showing full scale deflection for a current IG can be converted into an ammeter for measuring current having values more than IG (i.e., I > IG) by putting a low resistance rS in parallel with the galvanometer where,