Question: Newton's third law says that for every action there is an equal and opposite reaction. Here, action and reaction

(a) always act on the same body

(b) always act on different bodies in opposite directions

(d) act on either body at normal to each other

According to the third law of motion, action and reaction always act on different bodies in opposite directions.

Question: There are 3 solids made up of aluminium, steel and cotton of the same shape & same volume. Which of them would have the highest inertia?

Question: similar bullets are fired one by a light rifle & another by a heavy rifle with the same force. Which rifle will hurt the shoulder more & why?

From the light rifle, according to the law of conservation of momentum or explanation by Newton’s laws of motion.

Question: Velocity versus time graph of a ball of mass 50 g rolling on a concrete floor is shown in the figure given below. Calculate the acceleration and frictional force of the floor on the ball. 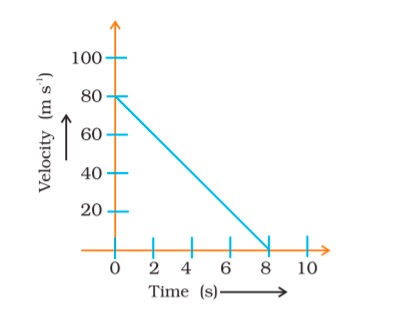 Question: Water sprinklers used for grass lawns begin to rotate as soon as the water is supplied. Explain the principle on which it works.

The working of the rotation of sprinklers is based on the third law of motion. As the water comes out of the nozzle of the sprinkler, an equal and opposite reaction force comes into play. So the sprinkler starts rotating.

Question: What is momentum? Write its SI unit

Question: A horse continues to apply a force in order to move a cart with a constant speed. Explain why?

The force applied by the horse balances the force of friction.

Question: A rocket works on the principle of conservation of

Question: A water tanker filled up to 2/3 of its height is moving with a uniform speed. On the sudden application of the brake, the water in the tank would

Question: The inertia of an object tends to cause the object

(a) to increase its speed

(b) to decrease its speed

(c) to resist any change in its state of motion

(d) to decelerate due to friction