Check the revised CBSE Syllabus of Class 9 Mathematics. Refer to this reduced syllabus to check the details of the course structure and pattern of the question paper for the annual exam 2021. 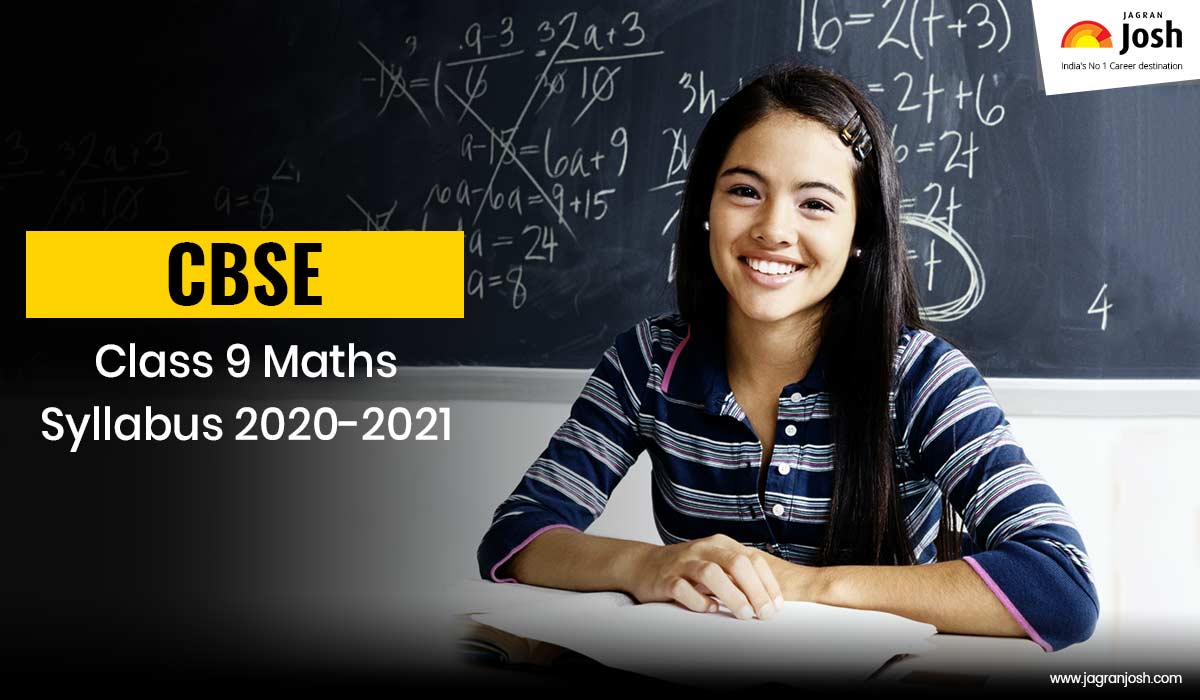 CBSE has released the revised syllabus for all subjects of class 9. Amid the COVID-19 pandemic, the board has reduced the syllabus by 30%. We are providing here the CBSE syllabus of Class 9 Mathematics subject for the Annual Exam 2021. This latest CBSE Class 9 Maths syllabus gives details of all topics and lessons to be prepared in the current academic session. It also mentions the unit-wise weightage and question paper design for the annual examination. All the CBSE affiliated schools are expected to follow the same pattern while preparing the question papers for the exam. With this article, students may read and download the CBSE Class 9 Maths Syllabus 2020-21 in its revised form.

Find below the complete syllabus for CBSE Class 9 Mathematics:

You may also download the latest NCERT Book and Solutions for Class 9 Maths to help you effectively study throughout the year and make effective preparations for the periodic tests and the CBSE Annual Examinations.

and their representation on the number line.

3. Rationalization (with precise meaning) of real numbers of the type

(and their combinations) where x and y are natural number and a and b are integers.

6. Recall of laws of exponents with integral powers. Rational exponents with positive real bases (to be done by particular cases, allowing learner to arrive at the general laws.)

1. (Motivate) If a ray stands on a line, then the sum of the two adjacent angles so formed is 180o and the converse.

2. (Prove) If two lines intersect, vertically opposite angles are equal.

6. (Motivate) If a side of a triangle is produced, the exterior angle so formed is equal to the sum of the two interior opposite angles.

4. (Prove) The angles opposite to equal sides of a triangle are equal.

5. (Motivate) The sides opposite to equal angles of a triangle are equal.

1. (Prove) The diagonal divides a parallelogram into two congruent triangles.

2. (Motivate) In a parallelogram opposite sides are equal, and conversely.

3. (Motivate) In a parallelogram opposite angles are equal, and conversely.

4. (Motivate) A quadrilateral is a parallelogram if a pair of its opposite sides is parallel and equal.

5. (Motivate) In a parallelogram, the diagonals bisect each other and conversely.

6. (Motivate) In a triangle, the line segment joining the mid points of any two sides is parallel to the third side and in half of it and (motivate) its converse.

1. (Prove) Equal chords of a circle subtend equal angles at the center and (motivate) its converse.

3. (Motivate) Equal chords of a circle (or of congruent circles) are equidistant from the center (or their respective centers) and conversely.

5. (Motivate) Angles in the same segment of a circle are equal.

6. (Motivate) The sum of either of the pair of the opposite angles of a cyclic quadrilateral is 180o and its converse.

2. Construction of a triangle given its base, sum/difference of the other two sides and one base angle.

Area of a triangle using Heron’s formula (without proof).

Focus is on empirical probability. (A large amount of time to be devoted to group and to individual activities to motivate the concept; the experiments to be drawn from real life situations, and from examples used in the chapter on statistics). Internal Assessment will be conducted as per the following marks distribution:

The full syllabus can also be downloaded in PDF format by clicking on the following link:

We are also providing below the link to the previous syllabus that was released at the beginning of the current academic session. Students can use this syllabus to cross-check with the revised edition to know which topics and chapters have been eliminated from Class 9 Maths subject. However, students should prepare for their exams according to the latest/ revised CBSE syllabus only.