CBSE Class 9 Science notes for chapter 12 - Sound are available here. This is the first part of the notes in which you will get a crisp and brief explanation of important topics like production and propagation of sound, medium, waves, characteristics of sound, range of sound, reflection of sound and its applications.

Here, you will get the CBSE Class 9 Science, Sound: Chapter notes (Part-I). These chapter notes are prepared by the subject experts and cover every important topic from the chapter. You get a crisp and brief explanation of all these topics so as to make your learning easy and organized. At the end of the notes you can try the questions asked from the discussed set of topics. These questions will help you to track your preparation level and get a hold on the subject.

Keynotes for Chapter - Sound, are:

Sound is a form of energy which produces a sensation of hearing in our ears.

Production of Sound
Sound is produced due to the vibration of objects.
Vibration is a periodic back-and-forth motion of the particles of an elastic body or medium about a central position. It is also named as oscillation.
For example: 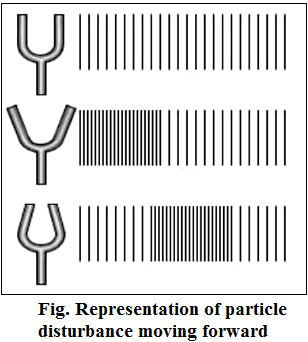 Only the disturbance produced by the vibrating body travels through the medium but the particles do not move forward themselves.

Wave that requires medium to propagate is called Mechanical wave.

Wave is a phenomenon or disturbance in which energy is transferred from one point to another without any direct contact between them. For example: Heat, light and sound is considered as a wave.

Types of Waves
On the basis of direction of propagation, waves are categorized into two parts:

Compressions are represented by the upper portion of the curve called crest.

Rarefactions are represented by the lower portion of the curve called trough. 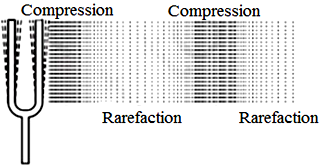 Characteristics of a sound wave

Pitch and loudness of Sound

Pitch: It represents shrillness or flatness of sound.

Loudness: It is a measure of the sound energy reaching the ear per second.

It depends on the amplitude of the sound wave.

It is measured in decibel ‘dB’.

Tone and Note
Tone: A pure sound of single frequency is called tone.
Note: An impure sound produced by mixture of many frequencies is called a note. For example: A musical note has tones of various frequencies.

When sound waves strike a surface, they return back into the same medium. This phenomenon is called reflection.

There are two basic laws of reflection of sound:

(i) Angle of incidence is equal the angle of reflection.

(ii) The incident wave, the reflected wave and the normal all lie in the same plane.

Applications of  Reflection of Sound

Many instruments work on the basis of multiple reflections of sound:

Q2. Which characteristic of the sound helps you to identify your friend by his voice while sitting with others in a darkroom?

Q3. An airplane produces a sound wave with frequency of 5 KHz and wavelength 30 m. In how much time would the sound wave cover the distance of 4 Km?

Q5. A source is producing 1500 sounds waves in 3 seconds. If the distance covered by a compression and an adjacent rarefaction be 68 cm, find (a) frequency (b) wavelength and (c) velocity of sound wave.

Q6. A sound wave travels at a speed of 340m/s. If its wavelength is 2 cm, what is the frequency of the wave? Will it be in the audible range?

Q7. Can we hear the ringing of a mobile phone placed in a vacuum chamber?