CTET & TET 2020 Validity Extension approved by the NCTE. CTET and TET Certificate will now be valid for lifetime from 7 years earlier. Candidates who will now pass Teacher Eligibility Test can apply for Teacher Recruitment throughout the life, till they fulfill eligibility criteria. Check official statement here. 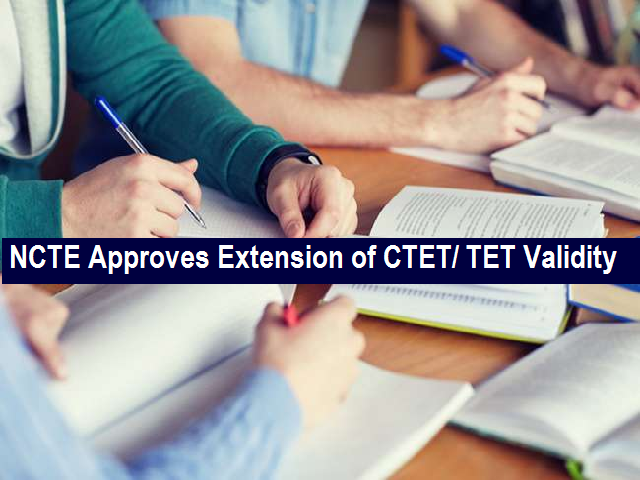 CTET & TET Validity Extension: National Council for Teacher Education (NCTE) has granted its approval to the extension of validity of CTET and TET Certificate to lifetime. Earlier, the Certificate of TET or CTET exam was valid up to 7 years. The decision in this regard was taken during the 50th Meeting of the NCTE's General Body that was held on September 29, 2020. The Council discussed several issues during the meeting and one of the main topics of discussion was the issue of extension of Validity of Teacher Eligibility Test to lifetime from seven years. The decision could be a relief for candidates who have already obtained the CTET Certificate or TET Certificate and could not apply for teacher recruitment due to expiry of its validity after 7 years.

As per the statement mentioned on the "Minutes of the 50th Meeting ... NCTE ..." that was released on 13 October, the provision of extension of validity of Teacher Eligibility Test will have prospective effect and the NCTE would take proper legal opinion and will act accordingly in case of candidates who have already passed the exam and obtained the TET Certificate. Have a look at the statement mentioned on the official document below:

How will the extension of CTET or TET Validity be beneficial?

The extension of validity of CTET and TET Certificate to lifetime will be highly beneficial for the unemployed youth of the country. The move is expected to increase employment opportunities for candidates who aspire to fetch a teaching job in schools.

Has CBSE notified about the extension of CTET Validity?

As of now, there is no official update from the Central Board of Secondary Education (CBSE) on the extension of CTET Certificate validity. The information shared above is merely on the basis of minutes of the NCTE's 50th General Meeting. It is expected that the CBSE will release an update regarding the same on its official website after the official directions of the NCTE.

Is the extension of TET Validity effective from now?

No, the extension of TET or CTET validity is not effective from now. The respective states and the boards will notify the implementation of such decision after the NCTE officially notifies the same. As of now, the decision is only mentioned in the document containing the minutes of 50th General Meeting of the NCTE.

No, CBSE has yet not announced CTET 2020 exam date.

No, the extension of CTET Validity will be applicable once the NCTE or CBSE releases notification in this regard.

What is the validity of CTET Certificate?

The validity of CTET Certificate is of 7 Years; however, as per the NCTE decision, the validity will now be extended till lifetime.
Comment ()