Fidget Spinners are the latest fad in the market. While they claim to be helpful in busting stress many experts are skeptical and schools are banning their use.

Fidget Spinners are everywhere. One look around your college campus and you can easily spot someone with a fidget device in their hand. Recently it featured in the top 10 best selling games and toys. The device has gained popularity for itself with almost every age group, especially amongst the college students. For them this device acts as both a toy and helpful tool to distract their thoughts from wandering away when trying to focus on something important.

But how did this small device with a ball bearing in the middle that you can spin and rotate on your fingers managed to take the market by a storm. Let alone popularize itself amongst people of all generations. And can it really help you focus better while studying or just simply researching content for a project report, deal with the anxiety and stress that comes with the fast approaching exam season now. Let's have a look at some basic facts about the fidget spinners and how helpful they are for someone like you?

The first prototype of the device was created by Catherine Hettinger from Florida back in the year 1993. She invented it as a communication method to interact with her daughter, who is disabled. Later on she even patented the design in the year 1997 and tried to sell the device as therapeutic device for children suffering from ADHD, anxiety and autism. Unfortunately, no one picked up to it and after years of efforts with no fruitful results she gave up.

Fidgeting is something that is inherent to the human behavior. We tend to twist, twirl or click things in our fingers to prevent our mind from wandering off. You might have seen people waving their hands around a lot while giving a speech or constantly pressing on the button in click pens all these are examples of fidgeting. If you set out the look for someone who doesn't fidget at all, probability is  the only people you'd find be the guards outside the Buckingham Palace as shown in movies, who hardly twitch or move.

How did the device become so popular?

The fidget spinners were first marketed as stress busters for office goers. But with it's simple design and toy like look and feel soon even the kids caught up with the trend and found for themselves a new toy. 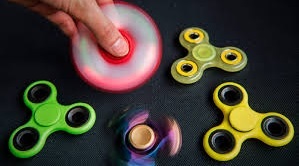 What's the science behind fidget spinners?

There are a few theories associated with the science behind these spinner but there is not much hardcore scientific evidence that proves them.

One thought is that fidgeting occupies parts of your brain that otherwise are responsible for distracting the other parts of brain bombarding them with random thoughts. Fidgeting is nothing new, people have been making use of everyday items as fidgeting devices for a long time for example - twirling the pencil between their fingers, constantly pressing the button on click pens etc. As explained by Roland Rotz and Sarah D. Wright in their book, 'Fidget To Focus' fidgeting can help avoid distractions caused by boredom.

Second Theory states that bodily movements commonly considered a form of fidgeting are actually a part of human thinking and expression process. Try remaining focused on something like talking to a group, writing a long essay or even singing for that matter while remaining completely still. It's just not possible, you could say fidgeting is like a reflex action that cannot be controlled by voluntary thoughts. Moreover, standing completely still while performing any of the above mentioned activities would make you look creepy. Doodling is another form of fidgeting only, and there have been instances where people have reported that doodling helps  them focus better on things. 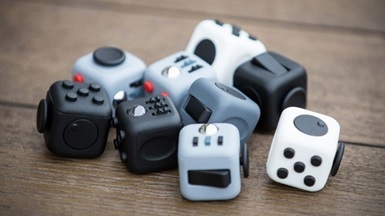 A third set of thoughts states that fidgeting for many people is like a form of a ritual. The purpose of rituals is to offer an individual with comfort, familiarity, a sense of perfectibility or a structure that was absent in their lives. Repetitive motions that come under the tag of fidgeting such as squeezing a ball or tapping/twirling your pen can take the shape of comforting mini rituals.

But with a lot of school banning these devices and experts skeptical about the claims of stress reduction by these device we back to square one, 'Are fidget spinners useful in reducing stress and enhancing focus?'

Fidget spinners and cubes have been around in anxiety groups for some time now. But were never marketed on large scale and targeted mainly at people suffering from attention disorders or anxiety. For students suffering from ADHD or other such problem, these devices can help provide them with sensory simulation and distraction.

In summation, the clicking, spinning, twirling that you can do with these devices can help keeping your hands busy and thus providing a useful distraction for you to focus better on your college studies. But like every good thing, overuse of these devices is not good. Used wisely and thoughtfully they can help improve your focus while studying for college exams, making project reports etc but if used excessively they can take the form of an addiction and become a distraction themselves. It's up to you to put to them to a good use.

For more quirky articles about college life and making college studies and campus life fun, you can visit www.jagranjosh.com/college. You can also subscribe to our newsletter through the link given below to get such interesting updates about college life directly in your inbox.