According to the economic survey 2017, cities can act as dynamos of urban development and help India add competitive sub-federalism to competitive federalism. Hence, we provide Economic Survey 2017 analysis on Competitive Sub-Federalism for the IAS exam 2017.

"All through organised history, if you wanted prosperity you had to have cities. Cities are places that attract new people with new ideas." – Jane Jacobs

The Economic Survey has very keenly observed that our cities are complex, organic, humming entities that tend to defy the attempts of planners and architects to impose order. Hence, empowering cities will be critical regarding the political economy challenges from state governments.

It may be stated that a few successful models will provide the impetus for wider change. Cities, like states, must compete with each other to unleash dynamism and competitive federalism in India must add competitive sub-federalism in its framework.

Here, we provide exclusive economic survey analysis and recommendations on the Competitive Sub-Federalism which can prove to be extremely helpful in IAS exam preparation.

The survey argues that cities are complex, organic, humming entities that tend to defy the attempts of planners and architects to impose order. In India urbanisation is rapidly on the rise as urban Indians now form about one-third of the population and they produce more than three-fifths of the country’s GDP. Hence, urbanisation will define the trajectory of Indian development.

The exodus of rural Indians into the cities over the coming decades will pose tremendous challenges for government, particularly the municipalities who will be primarily responsible for providing the services. As with competition between states is becoming a powerful dynamic of change and progress, that dynamic will also extend to competition between states and cities, and between cities. 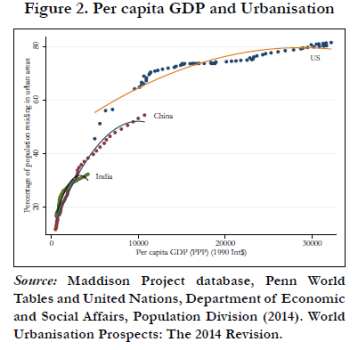 If the magnitude of Indian urbanisation is not special, the patterns of urban size seem to be, in the sense of not adhering to Zipf's Law. The law claims that the city with the largest population in any country is generally twice as large as the next-biggest; three times the size of the third biggest, and so on. In other words, the nth ranked city would be 1/nth the size of the largest city. This has been shown to hold true for many countries, but not so for India.

The plot for India is concave which implies that many of the smaller cities are unusually small and contrary to what one might think, so are the bigger ones. There are many reasons why the large cities are unusually small. One explanation might be that their infrastructure is overburdened. Another is that India is land scarce relative to most countries, discouraging migration, particularly because distorted land markets render rents unaffordable.

Recent initiatives by the Government for urban rejuvenation:

The Fourteenth Finance Commission (FFC) grant to urban local bodies for 2015-2020 is almost 277 per cent higher than the grant recommended by its predecessor. With the higher devolution of taxes to the states and grants to the urban local bodies, the overall public funds available for urban rejuvenation have increased. As a follow to the flagship programme (JNNURM) started by the Centre in 2005 across 65 cities, the Government has launched several new initiatives to rejuvenate urban areas.

Some of the key schemes are - Smart Cities Mission, AMRUT, the Swachh Bharat Mission (SBM), HRIDAY, Digital India, Skill development, Housing for All, Metro transport etc. The emphasis is now laid on the strong convergence between area-based and project-based schemes so as to exploit synergy and optimise benefits while avoiding costs overlap.

Estimation of the Property Tax Potential from Satellite Imagery:

The primary source of own revenue for urban local bodies is the property tax. Based on an assessment of 36 cities, the 13th Finance Commission affirmed that by increasing the compliance to even 80-85 per cent, the current property tax could be increased. Challenges to the property tax collection include inaccurate enumeration and likely under-valuation.

The collection is also hampered by a lack of adequate staff in the revenue department in many ULBs. Geographical Information System (GIS) technology based Big Data solutions can greatly help in assessing the total built-up area in a city and in the estimation of the property tax potential and its valuation for each city.

Adopting modern techniques, along with other measures, can enable the urban local bodies to mobilise untapped potential. Revenue self-sufficiency can significantly enhance the ULBs capacity to invest in much-needed infrastructure and services to improve the quality of life of their citizens.

The role of private sector in urban development:

The active role of civil society can prevent excessive exploitation of resources and reduce the impact negative externalities associated with rapid urbanisation. For example, in Gurgaon, there has been a slow emergence of citizens groups, environmental groups, and resident welfare associations to monitor the commons.

The private sector has to bear the burden of higher transaction costs, if the city is managed by multiple authorities, each having greater power and competing to extract rent. The transaction costs would also be higher if initial cohesive development plans for the city is not put in place. Post-growth infrastructure development costs are much higher and at times prohibitive.

The first task is empowering ULBs financially. Cities that are entrusted with responsibilities, empowered with resources, and encumbered by accountability can become effective vehicles for unleashing dynamism so that to competitive federalism India can add, and rely on, competitive sub-federalism.

The states should empower cities to levy all feasible taxes. Municipalities also need to make the most of their existing tax bases. The Government should leverage the Indian Space Research Organization (ISRO)/ National Remote Sensing Agency (NRSA) to assist ULBs in implementing GIS mapping of all properties in the area of a ULB.

Secondly, data and transparency can play an important role here. The Ministry of Urban Development (MoUD) should give greater priority to compile and publish comprehensive data on the urban sector to incorporate transparency in ULBs. Similar to the state government’s performances, the NITI Aayog should compile comparative indices of municipality’s performance annually based on the actual accountability and administrative capacity to deliver the core public services.