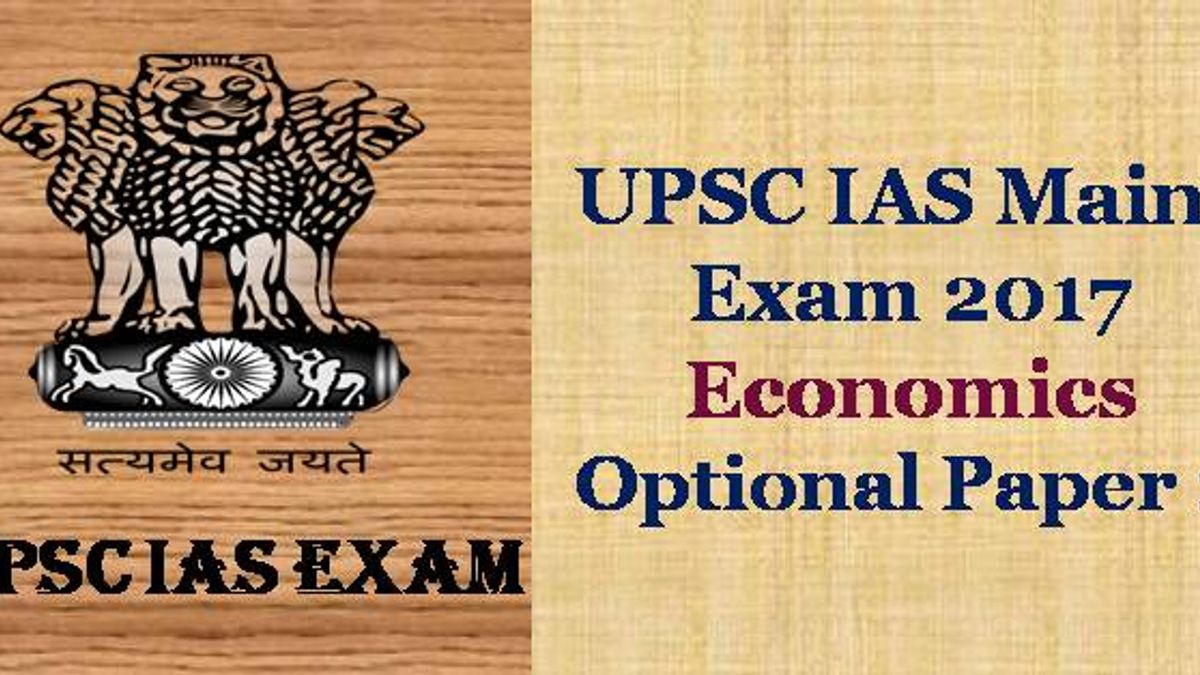 It is much beneficial to study and solve the UPSC's previous year question papers of IAS Mains Exam. The IAS aspirants should make a strategy to attempt the questions asked in IAS Mains Exam and it will help them a lot to develop a better writing skills required in the IAS Exam.

Here, we have provided Economics Optional Paper 2 of IAS Mains Exam 2017 and that should be solved by the IAS aspirants having economics as an optional paper in IAS Mains Exam.

1. (a) Would you advocate that the income of rich farmers should be taxed in India? Give reasons.   10

(b) "Subsidies are a source of inefficiency and corruption." Do you agree with the statement in the Indian context? Justify your answer       10

(c) What caused the problem of non-performing assets of Indian commercial banks and what cures are being suggested to solve the problem?     10

(d) What were the considerations underlying the initiation of the railways and the road transport system in India in the 19th century?   10

(e) Write a brief note on the state of manufacturing in India in the 18th century and the subsequent de-industrialisation.    10

2. (a) Discuss the manufacturing condition prevailed during pre-independence period. Do you feel that private sector did not come forward for investment due to fear of Nationalisation? Give reasons.    20

(b) Critically examine condition of Agriculture and rural economy during the pre independence era.             15

(c) Discuss the Wage-Goods model of development as given by C.N. Vakil and P.R. Bramhanand.     15

3. (a) Critically examine the difference between absolute poverty and relative poverty. Between the two which t appropriate? Give reasons.    20

(b) Examine the process of introducing and passing GST Bill in Parliament. How it helps in Fiscal Consolidation in the country?    15

(c) What were the major hurdles to development as experienced in India during first decade after independence? Discuss them and what steps were taken to remove them?    15

(b) Critically examine the salient features of Fiscal Responsibility Act.    10

(d) Bring out the salient features of New EXIM policy of Government of India.     10

6. (a) Monetary Policy in India is often criticised as ineffective because large part of the country is not yet monetised. Do you agree with the view? Give reasons.     20

(b) Trace the development of Non Banking Financial Companies in India since the liberalisation era and comment on their impact on the effectiveness of the interest rate policies of the RBI.    15

(c) Explain how Railways played an important role in unifying the people of India during pre-independence period. 15

7. (a) During post-independence era India assigned the role of ‘Commanding Heights’ to the public undertakings. Should this policy be continued? Give reasons for your answer.    20

(b) Explain the contribution of’ V.K.R.V. Rao in the estimation of National Income.    15

(c) Critically examine the major changes in FDI policies of the Government of India since 1991.      15

8. (a) what are the basic features of new national rural employment guarantee scheme? What are the impediments in their implementation?     20

(b) “Agriculture Subsidy is both an Economic as well as Social issue, hence the Government finds it difficult to take a decisive decision”. Comment on the above statement.     15

(c) Discuss the changes in the sectoral composition of GDP in recent years.    15