The IAS aspirants should be aware of the previous year papers of IAS mains exam to get an overall idea of the exam pattern. Here, we have provided the question paper of Geography Optional Paper 2 of IAS Mains Exam 2017. 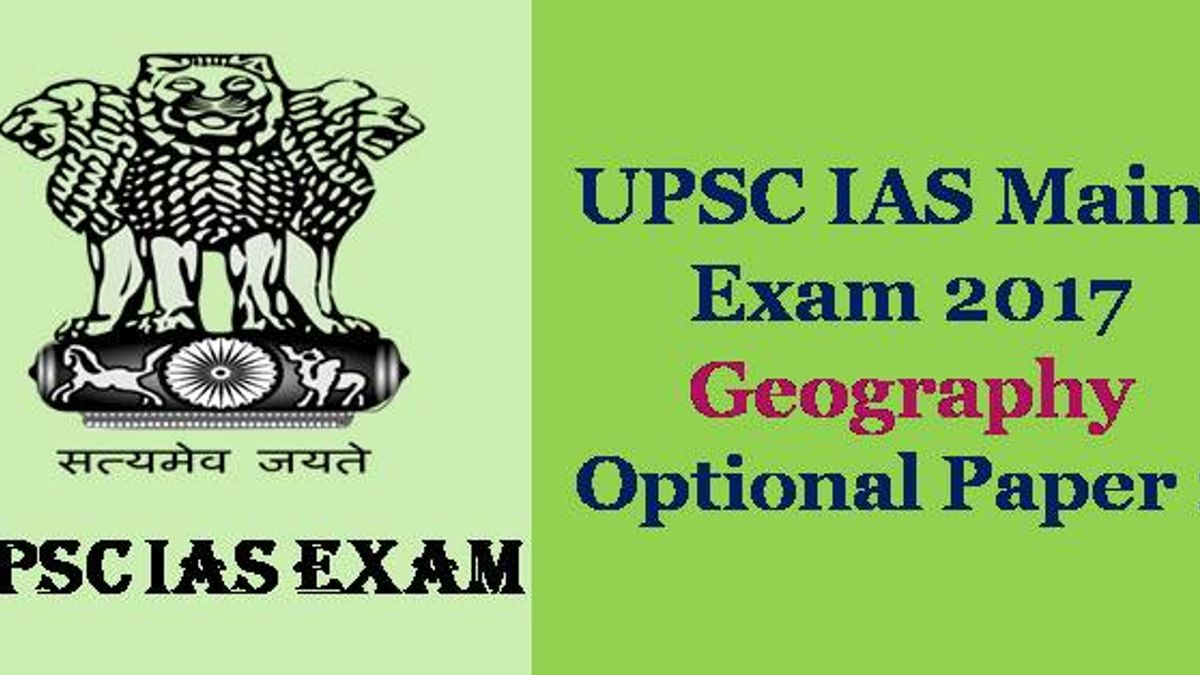 There are EIGHT questions divided in two Sections and printed both in HINDI and in ENGLISH. Candidate has to attempt FIVE questions in all.
Question Nos. 1 and 5 are compulsory and out of the remaining, THREE are to be attempted choosing at least ONE question from each Section. The number of marks carried by a question/part is indicated against it.

Answers must be written in the medium authorized in the Admission Certificate which must be stated clearly on the cover of this Question-cum-Answer (QCA) Booklet in the space provided. No marks will be given for answers written in a medium other than the authorized one. Word limit in questions, wherever specified, should be adhered to. Illustrate your answers with suitable sketches/maps and diagrams, wherever considered necessary.

(a) On the outline map of India provided to you, mark the location of all of the following. Write in your QCA Booklet the significance of these locations, whether physical /commercial / economic /ecological /environmental /cultural, in not more than 30 words for each entry : 2 x10=20

(b) Give a reasoned account of unusual pattern of distribution of monsoonal rainfall in India in 2017. 10

(d) Small towns in India have problems and prospects of their own. Elaborate.  10

(a) Discuss the freshwater crisis  in India and prepare a blueprint for its sustainable management. 20

(b) Identify the Naxal-affected areas in India and discuss their socio-economic problems. 15

(c) Critically examine the feasibility of development of a comprehensive network of airways in India. 15

(a) "An effective three-tier Panchayat Raj System will strengthen the bottom-up approach to multilevel planning in India." Explain. 20

(b) 'Linguistic diversity is an asset as well as a  challenge in India." Explain the statement focussing on the distribution of languages and the major steps taken to address the related issues. 15

(c) How may tourism in hilly areas of India be developed as an important source of economy? 15

(a) Mention various methods  of functional classification of towns in India and explain the method applied by Asok Mitra. 20

(b) Farmers' suicide is one of the major agrarian problems in India. Bring out its causes and suggest the remedial measures with special reference to Maharashtra, Andhra Pradesh and Punjab. 15

(c) Land reform is a key to modern agriculture in India. Describe various measures taken in this direction after Independence. 15

Question 5:  Answer the following questions in about 150 words each :

(a) Explain the role of 'Hill Transport Subsidy Scheme' in reducing regional imbalances in areas identified by the Government of India.

(b) Bring out the geopolitical implications of Doklam dispute in the context of Indo-China relations.

(d) Mini steel plants can act as an instrument of decentralization of iron and steel industry in India. Explain.

(e) Goods and Services Tax (GST) has differential impact on developed and backward States of the country. How and why?

(a) Interlinking of rivers may sent as a major source of assured irrigation and all-weather inland navigation in India. Comment on its feasibility taking into account physical, economic and ecological implication. 20

(b) Religious minorities are largely concentrated in border States of India. Discuss its causes and consequences. 15

(c) What do you understand by soil pollution? Delineate the areas vulnerable to it in India and suggest remedial measures. 15

(a) Integrated development of road and rail networks in a complementary framework is a prerequisite for regional development. Explain with reference to North-Eastern Region of India. 20

(b) Describe the salient features of Sagar Mala Project and highlight its role in port-led development of coastal regions in India. 15

(c) Justify the inclusion of Meghalaya in Peninsular India and discuss its vegetation and soil types. 15

(a) Name the major industrial regions of India indicating the bases of their identification. Highlight their basic problems. 20

(b) Drainage pattern in Peninsular India is a result of its geological structure and topography. Elaborate.

(c) Why has solar energy in India not been developed to desired level in spite of its high potential?  15