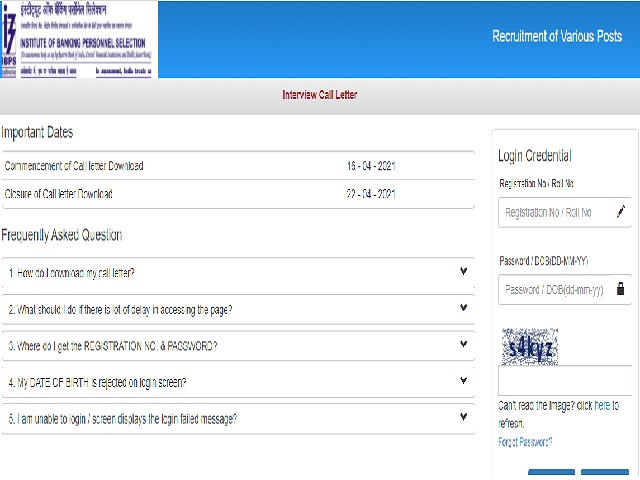 IBPS Interview Admit Card 2021: Institute of Banking Personnel Selection (IBPS) has released the admit card for various posts including Analyst Programmer & IT Engineer on its website. All such candidates who have successfully qualified in the written test can now download their interview admit cards through the official website of IBPS.i.e.ibps.in.

The facility of downloading IBPS Interview Admit Card 2021 will be available from 16 April to 22 April 2021. The candidates can download the admit cards by following the easy steps given below.

How and Where to download IBPS Interview Admit Card 2021?

Documents to be Produced:

The candidate appearing for the interview required to bring the call letter along with a photocopy of the candidate’s photo identity (bearing exactly the same name as it appears on the call letter) such as PAN Card/ Passport/ Permanent Driving Licence/ Voter’s Card/ Bank Passbook with photograph/ Photo identity proof issued by a Gazetted Officer/ People’s Representative along with a photograph / Identity Card issued by a recognised college/ university/ Aadhar/ Eaadhar card with a photograph/ Employee ID/ Bar Council ID card should be submitted to the invigilator for verification.

The candidate’s identity will be verified with respect to his/her details on the call letter, in the Attendance List and requisite documents submitted. If the identity of the candidate is in doubt the candidate may not be allowed to appear for the Examination/ further process of selection including an interview.