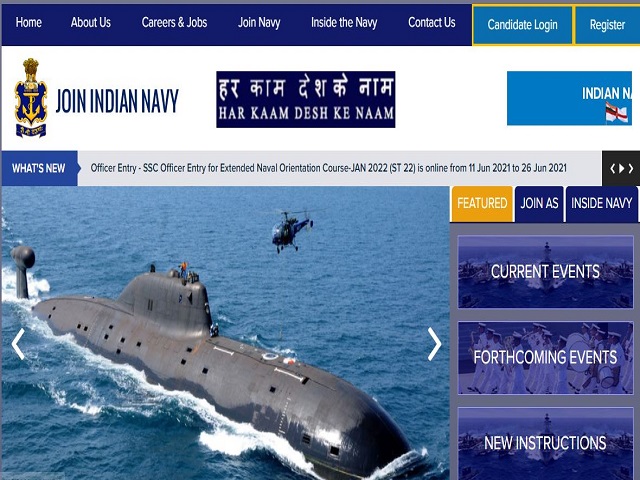 It is to be noted that, Due to COVID-19 pandemic, an exception is being made in the public interest wherein no Indian Navy Entrance Test (INET) for the AT – 22 course is being held for shortlisting candidate for SSB. The final merit list for induction will be prepared based only on SSB marks.

Candidates who have graduated/post-graduated with minimum 60% marks in aggregate or equivalent CGPA or are in the final year from a university incorporated by an Act of Central or State Legislature in India or other educational institutions established by an Act of Parliament or declared to be deemed as Universities/Autonomous Universities under UGC, Act 1956; IIT Act, 1961; AICTE Act, 1987; NITSER Act, 2007; IIIT Act, 2014, or; Obtained a degree in Engineering with 60% marks in aggregate or equivalent CGPA/System from such foreign university/college/institution recognised by the Government of India for the purpose or Engineering Degree/equivalence certificate from Association of Indian Universities established under AIU, Act 1973, can apply. The candidate will, however, be required to fulfil the
educational qualification stipulated above before joining INA. The candidate failing to meet stipulated educational criteria will not be permitted to join INA, Ezhimala.

How to Apply for Indian Navy SSC Recruitment 2021 ?

Candidates can register themselves and fill application on Indian Navy website www.joinindiannavy.gov.in latest by 26 June 2021.

What is the last date for Indian Navy SSC Officer Application Form ?