Questions on mixed caselets are often seen in the CAT Exam and other important management entrances as well. These questions are important not just for the quantitative aptitude section but also for the Data Interpretation Section as well.

Practice the question on Mixed Caselets in order to get a good percentile in your targeted management exam.

Directions for questions (1 to 5): Answer the questions based on the following bar graph and the adjoining table. 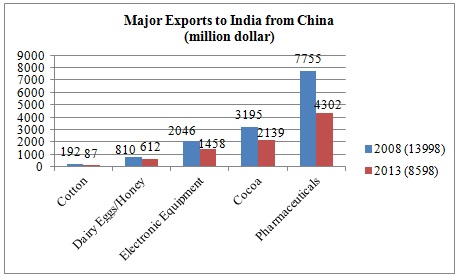 2. What was the approximate size of Indian market (in million dollar) in 2013?

4. Which of the following products showed the maximum percentage increase in export during the given period?

5. What is the ratio of exports of pharmaceuticals from china in 2013 to that of electronic equipment in both the years? 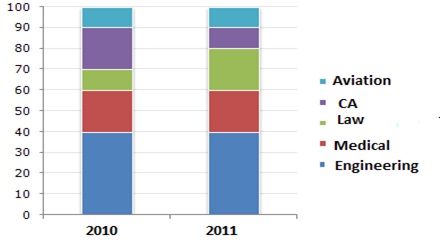 6. If the Female student’s opted medical in 2010 is 3600, then approximately what percent are the male opted engineering as career option in 2010?

8. The total number of students enrolled in different courses in 2011 is 14,300 and increased at the rate of 10% from the previous year, then the number of  female students opted CA in 2010 will be :

In this section we will explain the rationale for choosing the answer pertaining to every question. After practicing these MCQ(s), you would be able to understand the concepts of Mixed Caselets.

Explanation (4): Cotton is the obvious answer because its share went up more than twice. Hence answer is (c).