Practice the questions of Analogies or Reverse Analogies at MBA section of Jagranjosh.com to prepare for the Verbal Ability Section of CAT, CMAT, MAT, XAT, IIFT, SNAP etc.

Directions (1 – 10): The following questions have a pair of words having a relationship followed by another pair in which one of them is missing. Understand the relationship between the parts of the first and then select from the options below that best suits the missing part of the second pair.

Explanation (2): The first rotates about the second.

Explanation (3):  Clearly Sonnet is a part of Poem; similarly murder is one of the type of Crime.

Explanation (4): The relationship between GREAT and HSFBU is G followed by the next letter H and so on as shown below. 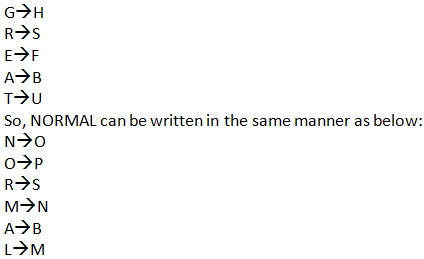 Explanation (5): The letters in the second part are moved six times to their right as explained below:

Explanation (6): In the word DOUBLE every two words from the beginning are interchanged to form OD BU EL.

Explanation (7): Even though the answer is E, there is a relation between all the letters when taken in series.

Write them in series:

Now take the remaining letters in reverse so that you can see they from are in series as well.

So the next four letters should be J_K_

Now fill the two blanks with the two preceding letters of R, that is P and Q, but in reverse.

So JQKP should be the next series of letters that is not in the options. So answer is 5.

Explanation (8): Second is larger from the first.