Introduction to Euclid's Geometry (Chapter 5) of Class 9 Maths NCERT Book is available here in PDF format. Download the latest edition of the chapter along with updated NCERT Solutions.

Download the NCERT Class 9 Maths Chapter 5 Introduction to Euclid's Geometry in PDF format. With the help of the latest edition of the chapter, students can make preparations for their Maths exam in the right way. We have also provided here the link to download the precise and simple NCERT Solutions for the chapter 5 of Class 9 Maths Book.

This chapter discusses Euclid’s approach to geometry and helps us correlate this with the present day geometry.

Major topics discussed in the chapter are:

A screenshot of the NCERT Class 9 Maths Chapter 5 is given below: 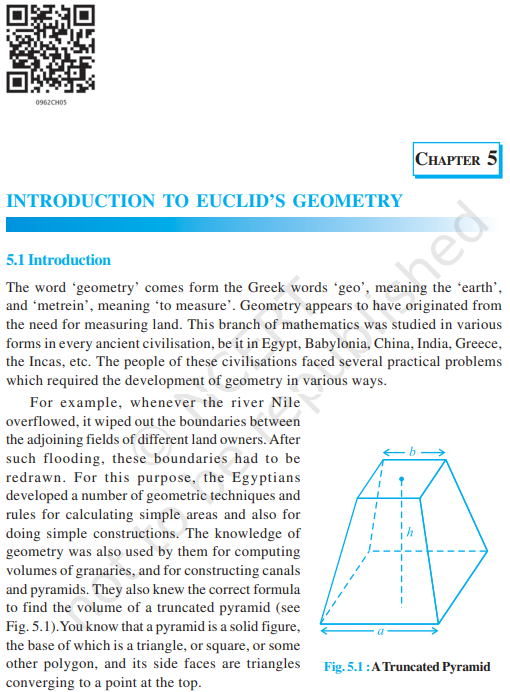 PDF download of the chapter can be accessed from the following link:

Some important points to revise from the chapter are:

Some of Euclid’s axioms are:

(2) If equals are added to equals, the wholes are equal.

(3) If equals are subtracted from equals, the remainders are equal.

(5) The whole is greater than the part.

(6) Things which are double of the same things are equal to one another.

(7) Things which are halves of the same things are equal to one another.

Postulate 1 : A straight line may be drawn from any one point to any other point.

Postulate 2 : A terminated line can be produced indefinitely. Postulate 3 : A circle can be drawn with any centre and any radius.

Postulate 4 : All right angles are equal to one another.

(i) ‘For every line l and for every point P not lying on l, there exists a unique line m passing through P and parallel to l’.

Download the NCERT Solutions for Class 9 Maths Chapter 5 from the following link:

Try some important questions given below for self assessment:

1. In how many lines two distinct planes can intersect?

2. If a point C lies between two points A and B such that AC = CB then prove that AC= 1/2 AB. Explain with the help of a figure.