NCERT Solutions for Class 5 EVS Chapter 14: When the Earth Shook

Get here the NCERT Solutions for Class 5 EVS Chapter 14: When the Earth Shook. All the solutions are provided with detailed and precise explanation.

Check NCERT solutions for Class 5 EVS Chapter 14: When the Earth Shook. We are providing here all solutions in PDF format which can be downloaded free of cost. Students will get the accurate solutions to all questions given on each page of Class 5 EVS NCERT Chapter 14. Read the best updated solutions for easy and effective preparation of exams.

Chapter 14: When the Earth Shook!

(a) Have you or anyone that you know ever faced such difficulty?

(b) Who all helped at such a time? Make a list.

(a) Yes, one of our relatives lives in Gujarat where he faced a similar situation a few years back.

(a) A lot of people from other places came to Jasma’s village. Who were these people? In what ways would they have helped the villagers?

(b) People in Jasma’s village rebuilt their houses with suggestions from the engineers. Will these houses be safer than before in case there is an earthquake again? Why?

(c) Think, if there were an earthquake where you live, would your house be in danger? What kind of damage could take place?

(a) These were the people from cities. They included some engineers, architects, scientists, some non-governmental organisations, doctors, etc.

They helped the villagers by providing them food, medicines, clothes and other necessary things. They helped them in putting up the tents. Engineers and architects suggested them to build new houses with special designs which will save their houses from earthquake.

(b) Yes, these houses will be safer than before in case there is an earthquake again as these houses are built with special designs suggested by the engineers.

(c) Yes, if there were an earthquake where I live then my house would be in danger. The walls of my house would have got cracks or may have collapsed leading to loss of property or even lives.

Compare your house with that of Jasma. List in your notebook what materials were used in making both the houses.

What Will You Do?

(a) Have you been told in your school or anywhere else about what to do in case of an earthquake?

(b) Why do you think one should go under a table during an earthquake?

(a) Yes, we were told in our school about taking some immediate actions if there is an earth quake. We should go to an open area. If someone is struck inside his house then he should hide himself under a table or other solid object to protect his head from the falling objects/materials.

(b) Because during an earthquake people are more likely to get injured by falling objects/materials. Hiding under a table will help them avoid such accidents.

(a) According to the TV report, thousands of people were injured and some died in Gujarat. If the buildings had been made in a way that they would not fall in the earthquake, would the damage have been different? How?

(b) At times like this, when people have lost their homes and all their belongings, what kind of help would they need?

(c) In such situations whose help would be needed and for what? Write in your notebook as shown here.

(a) Yes, there would have been the least damage if the buildings were made in such a way that they would not fall in the earthquake because mostly people get injured or die due to the collapse of houses and buildings.

(b) At such times people would need food, clothes, shelters and medicines.

(c) List of people needed for different kind of help is given below:

(a) Have you ever seen people in your area helping each other? When?

(b) Why do people live together in a neighbourhood?

(c) Imagine living in a place where there were no other houses or people around. How would it be? For example, whom would you play with? With whom would you celebrate festivals and special days? Would you be scared?

(d) People face a lot of difficulties when they lose people from their family, or their houses and belongings. In newspapers of the last one month, look for news related to such disasters – earthquakes, floods, fire, cyclones, etc., in different parts of the world. Collect these news reports and paste them in your notebook.

(a) Yes, I have seen people in my area helping each other when there were floods in our area a few years back.

(b) People live together in a neighbourhood so that they can happily celebrate all the occasions together and help each other at the time any mishap.

(c) Living alone without any other houses or people around will be quite scary and boring also.

(d) Students themselves should prepare this assignment.

Write a report with the help of the following words:

This year, many villages located near the Sutlej River got drastically affected by floods as the river water was overflowing due to heavy rains. Teams of NDRF, Indian army and air force reached the affected areas and started rescue work. Trapped people were taken out to the rescue camps. They were provided with food packets, drinking water, milk, medicines, etc. Injured people were immediately taken to the nearby hospitals. Many dead bodies were found in water. This was quite a horrible scene. Dead animals could be seen floating in water. Aerial survey of the whole flood affected region was conducted to estimate the loss. People were looking very sad as they had lost their homes, cattle, crops, etc. Some of them even lost their near ones. People were given medication to prevent diseases spreading by dirty water. State government announced a relief package for all the affected families.

What we have learnt

(a) What type of difficulties are faced by people during floods?

(b) Look at the picture, what kind of a school have the children come to after the flood? 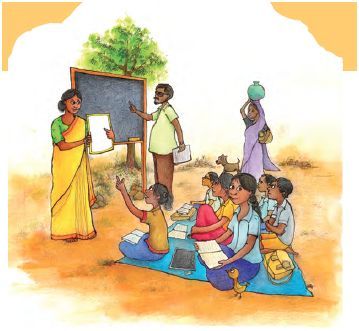 (c) Write down what people had to do to make their life normal again after the flood.

(a) People have to face following difficulties during floods:

(b) After the floods, the children have to attend their classes in the open area because their school building got damaged in the floods.

(c) People can make following efforts to make their life normal after floods:

Students may also download the NCERT solutions for this chapter in PDF format so that they can referthesolutions as and when required.

We have compiled the chapter-wise solutions for class 5 EVS. All these solutions have been prepared by our subject experts. Students can find here the accurate solutions with simple details which make it easy to grab the concepts and understand the logics in a much easier way. All the NCERT Solutions are available free of cost.

NCERT books are best for class 5 students to understand all the concepts and facts taught to them. So, students must be encouraged to read NCERT books to make learning easy and excel in their academics. Students may read and download the NCERT Books for class 5 from the following links: