NCERT Solutions for the class 10 chapter 1 of History are provided here. All the solutions are available in a detailed and accurate form. You will also get the option to download all the solutions in PDF. 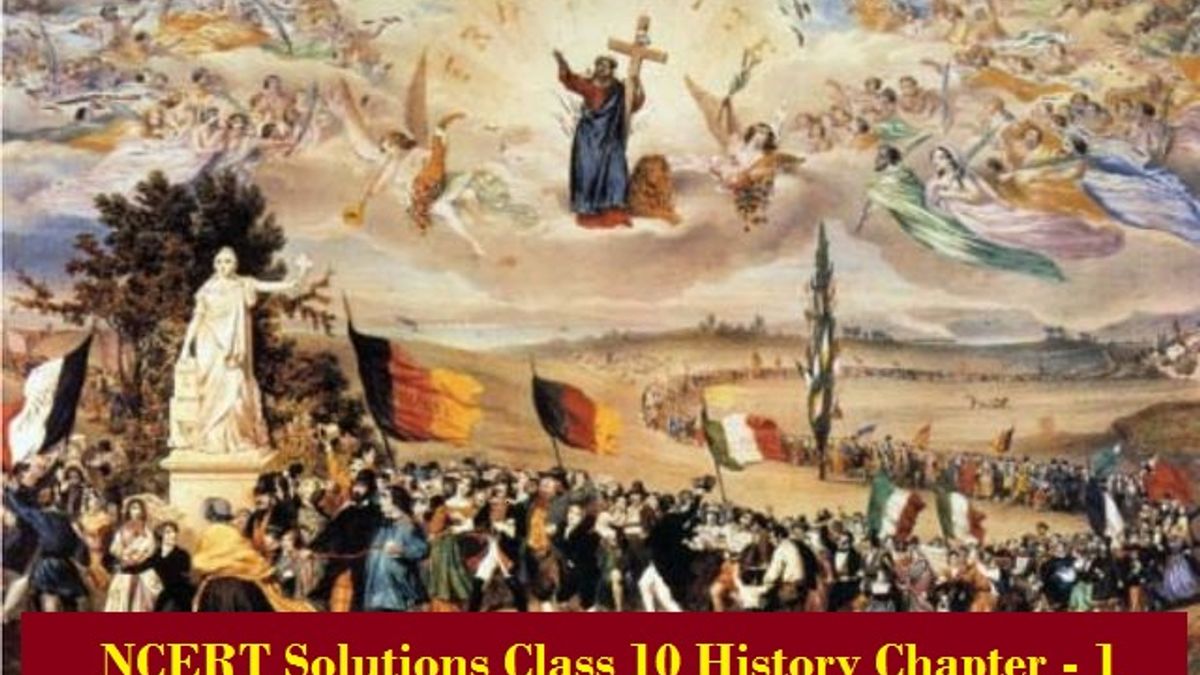 Check the best updated NCERT solutions for 10 Social Science History Chapter 1 - The Rise of Nationalism in Europe. These solutions will help you learn the facts and events easily. With these solutions, you will also learn the right way to write your answers perfectly in exams.

Chapter 1: Rise of Nationalism in Europe

Question 1. Write a note on:

(c) The Greek war of independence

(e) The role of women in nationalist struggles

(c) The Greek war of independence

Question 2. What steps did the French revolutionaries take to create a sense of collective identity among the French people?

Answer. The French revolutionaries took many important steps to create a sense of collective identity among the French people. These were:

Question 3. Who were Marianne and Germania? What was the importance of the way in which they were portrayed?

Answer: Marianne and Germania were female allegories for the French and the German nation respectively. These female allegories were used to portray ideas such as Liberty, Republic and Justice. These allegories remind the public of the national symbol of unity and to persuade them to identify with it.

Answer: In 1848, the middle class Germans tried to unite the different regions of the German confederation into a nation-state governed by an elected parliament. They were, however, repressed by the combined forces of the monarchy and the military, supported by the large landowners of Prussia. From then on, Prussia took on the leadership of the movement for national unification. Its chief minister Otto von Bismarck was the architect of this process with the help of the Prussian army and bureaucracy. Three wars over seven years – with Austria, Denmark and France – ended in Prussian victory and completed the process of unification. In January 1871, the Prussian king, William I, was proclaimed German Emperor in a ceremony held at Versailles.

Question 5. What changes did Napoleon introduce to make the administrative system more efficient in the territories ruled by him?

Answer: Napoleon introduced the following changes to make the administrative system more efficient in the areas ruled by him:

Question 1. Explain what is meant by the 1848 revolution of the liberals. What were the political, social and economic ideas supported by the liberals?

Answer: The 1848 revolution was led by the educated middle classes along with the poor, unemployed starving peasants and workers in Europe. In certain parts of Europe such as Germany, Italy, Poland and the Austro-Hungarian Empire, men and women of the liberal middle classes came together to push their demands for the creation of nation-states based on parliamentary principles.
The political, social and economic ideas supported by the liberals were:

Question 2. Choose three examples to show the contribution of culture to the growth of nationalism in Europe.

Answer: Three examples to show the contribution of culture to the growth of nationalism in Europe are:

Question 3. Through a focus on any two countries, explain how nations developed over the nineteenth century.

Answer: The development of the German and Italian nation-states in the nineteenth century.

Question 4. How was the history of nationalism in Britain unlike the rest of Europe?

Answer: The history of nationalism in Britain unlike the rest of Europe because:

Question 5. Why did nationalist tensions emerge in the Balkans?

Answer: The Balkans was a region of ethnic and geographical variations comprising the modern-day Albania, Greece, Romania, Bulgaria, Macedonia, Croatia, Bosnia, Slovenia, Serbia, Herzegovina and Montenegro. A large part of the Balkans was under the control of the Ottoman Empire. The spread of the ideas of romantic nationalism in the Balkans together with the disintegration of the Ottoman Empire made this region very explosive. All through the nineteenth century the Ottoman Empire had sought to strengthen itself through modernisation and internal reforms but with very little success. The Balkan peoples based their claims for independence or political rights on nationality and used history to prove that they had once been independent but had subsequently been subjugated by foreign powers. Hence the rebellious nationalities in the Balkans thought of their struggles as attempts to win back their long-lost independence.

You can download all these NCERT Solutions in PDF from the link provided below:

To get the NCERT Solutions for all chapters of Class 10 History, check the following link:

NCERT Solutions for Class 10 History The Rise of Nationalism in Europe: All Chapters