NCERT solutions for class 7 Civics Chapter 3 - How the State Government Works include the best explained answers that will help you score good marks in your exams. Download all the questions and answers in PDF format. 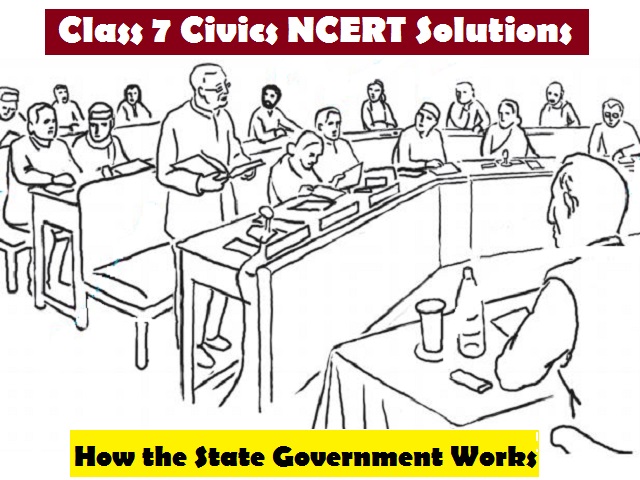 NCERT Solutions for Class 7 Social Science Civics Chapter 3 - How the State Government Works are explained in the simplest manner to help you easily understand all the concepts. All the answers include appropriate keywords and are prepared in a concise manner. These NCERT solutions will help you excel in the subject. We have provided here the NCERT solutions for the exercise questions given at the end of chapter 3 of the latest NCERT Book for Class 7 Civics. You can read all the answers from below or download them in PDF from the link provided in this article.

Check below the NCERT Solutions for Class 7 Civics Chapter 3 - How the State Government Works:

1. Use the terms ‘constituency’ and ‘represent’ to explain who an MLA is and how is the person elected?

Every state in India is divided into different constituencies on the basis of population. From each constituency, the people elect one representative who then becomes a Member of the Legislative Assembly (MLA). An MLA is elected through a general election. He/She may be a member of a recognised political party or can also be an independent candidate. One who gets the maximum votes becomes the MLA of that constituency.

2. How did some MLAs become Ministers? Explain

A political party whose MLAs have won more than half the number of constituencies in a state can be said to be in a majority. The political party that has the majority is called the ruling party that forms the government. After the general elections, the MLAs belonging to the ruling party elect their leader who becomes the chief minister. The chief minister then constitutes a cabinet by selecting other members from his party as ministers.

3. Why should decisions taken by the Chief Ministers and other ministers be debated in the Legislative Assembly?

Decisions taken by the Chief Minister and other ministers should be debated in the Legislative Assembly to ensure that the decision being taken is in the best interest of the people at large. It also discussed whether this decision is urgent or not,  what would be the subsequent cost of implementing it and will such decision earn the objections of any particular community.

4. What was the problem in Patalpuram? What discussions/actions were taken by the following? Fill in the table.

5. What is the difference between the work that MLAs do in the Assembly and the work done by government departments?

Download all the NCERT Solutions for Class 7 Civics Chapter 3 from the following link: