NCERT Solutions for Class 9 English Chapter 2 - The Sound of Music are provided here. Access the step-by-step answers in PDF and refer to them for effective learning. 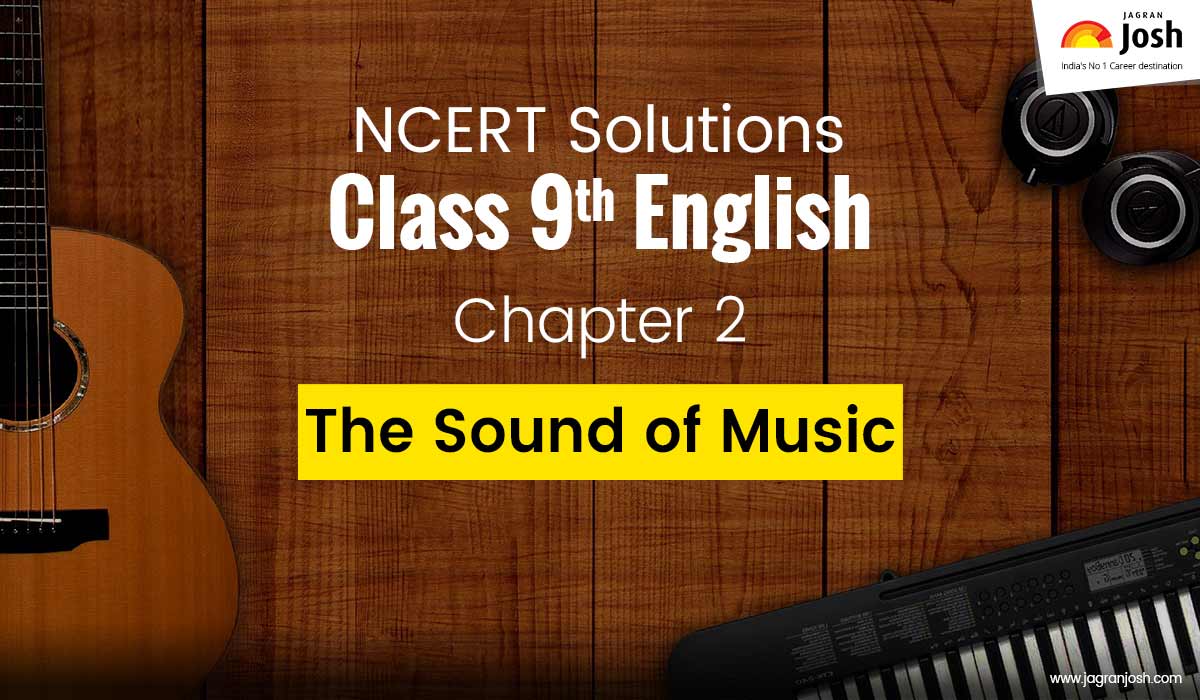 Get NCERT Solutions for Class 9 English Beehive Chapter 2 - The Sound of Music for free PDF download.  We have provided here the answers to all questions given in the second chapter of the latest NCERT book for Class 9 English. All the answers are explained in a step-by-step manner as is suggested by CBSE in the marking scheme for board exams. Thus the NCERT solutions by Jagran Josh form an essential resource to prepare for the school and board examinations and secure high marks.

Check below the NCERT Solutions for Class 9 English Beehive Chapter 2:

Part I - Evelyn Glennie Listens to Sound without Hearing It

Thinking about the text

I. Answer these questions in a few words or a couple of sentences each.

II. Answer each of these questions in a short paragraph (30–40 words).

1. How does Evelyn hear music?

Evelyn hears music by sensing the notes in different parts of her body. Ron Forbes, her trainer, turns two drums to different notes and asks her not to listen it through her ears but sense it in some other way. Then, she realizes that she could feel the higher drum from the waist up and the lower drum from the waist down. She learns how to open her mind and body to sounds and vibrations. Repeating the same exercise with Forbes, Evelyn starts discovering that she can sense certain notes in different parts of her body. When she plays the xylophone, she can sense the sound passing up the stick into her fingertips. By leaning against the drums, she can feel the resonances flowing into her body. On a wooden platform, she removes her shoes so that the vibrations pass through her bare feet and up her legs. She says that music pours in through every part of her body. It tingles in the skin, her cheekbones and even in her hair.

Thinking about the text

I. Tick the right answer.

II. Find the words in the text which show Ustad Bismillah Khan’s feelings about the items listed below. Then mark a tick (✔) in the correct column. Discuss your answers in class.

1. Why did Aurangzeb ban the playing of the pungi?

Aurangzeb banned the playing of musical instrument pungi because it had a shrill and unpleasant sound.

2. How is a shehnai different from a pungi?

Shehnai is an improved version of pungi as it has a better tonal quality than pungi. It is a natural hollow stem pipe that is longer and broader than a pungi. It has seven holes on the body of the pipe.

3. Where was the shehnai played traditionally? How did Bismillah Khan change this?

The shehnai was traditionally played in royal courts, temples and weddings. Ustaad Bismillah khan changed the tradition by bringing this instrument onto the classical stage.

4. When and how did Bismillah Khan get his big break?

Bismillah khan got his big break in 1938 when he played shehnai on radio on the occasion of the opening of the All India Radio in Lucknow. Soon he became an often heard player on radio.

5. Where did Bismillah Khan play the shehnai on 15 August 1947? Why was the event historic?

On 15 August 1947, Bismillah Khan played shehnai at the Red Fort. The event was historical because India got Independence from the British rule on that day.

6. Why did Bismillah Khan refuse to start a shehnai school in the U.S.A.?

Bismillah Khan refused to start a shehnai school in the U.S.A. because he did not want to stay away from India. He was really fond of Benaras, the River Ganga and Dumraon.

7. Find at least two instances in the text which tell you that Bismillah Khan loves India and Benaras.

The two instances that show Bismillah Khans's love for India and Banaras are:

(i) Bismillah Khan refused one of his student's offer to start a shehnai school in U.S.A. because of his immense love for Benares, River Ganga and Dumraon.

(ii) The second instance is when Khansaab was asked by Shekhar Gupta about moving to Pakistan during the partition, he said that he would never leave Benaras.

I. Complete the following sentences. Beginning with a to-verb, try to answer the questions in brackets.

II. From the text on Bismillah Khan, find the words and phrases that match these definitions and write them down. The number of the paragraph where you will find the words/phrases has been given for you in brackets.

You may download all these NCERT Solutions in PDF from the following link:

Also, check below the other related NCERT books and solutions for Class 9: