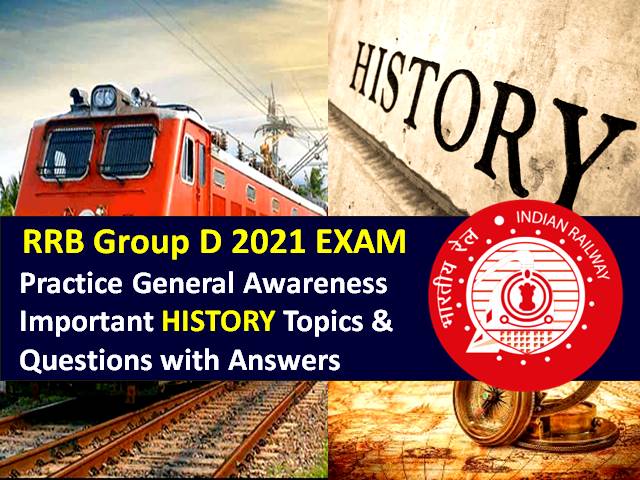 General Awareness/GK is considered to be one of the highest scoring sections of the RRB Group D 2021 Exam and will be of 20 marks. Let’s look at the important General Awareness/GK - History topics that have appeared frequently in RRB GROUP D Exam over the last few years.

1. In which year the Indian National Congress was formed?

2. The leader of Cochin who fought with Velu Thampi Dalwa aganist the British:

Explanation: the leader of cochin who fought with velu thampi dalwa against the british was paliath achan.

3. The first Viceroy of British India:

Explanation: The first Viceroy of India was Lord Canning.

4. Who was the first king presided the court of Kanauj?

Explanation: The first king who presided over the court of Kannauj was Harsha.

5. The leader who is known as ‘The Grand old man of India’:

Explanation: Dadabhai Naoroji (4 September 1825 – 30 June 1917) also known as the "Grand Old Man of India" and "Unofficial Ambassador of India" was an Indian scholar, trader, and politician.

6. In which year the University of Travancore was established?

Explanation: The University of Travancore was established in 1937 by a promulgation of the Maharajah of Travancore, Sri Chithira Thirunal Balarama Varma who was also the first Chancellor of the University.

7. The year in which the postal stamp was introduced first:

Explanation: On January 10, 1840, the postage for all half-ounce letters was set at one penny.

Explanation: Dara translated the Upanishads and the Bhagavad-gita into Persian.

9. Al Biruni came to India with:

Explanation: Alberuni (Abu Rayham Beruni) was a persian scholar who came to India with Mahmud of Ghazni in 1017.

10. The Fort at Pulicat was built by:

Explanation: The Portuguese established a trading post in Pulicat in 1502 with the help of the Vijayanagar rulers.

11. Kabir was the disciple of:

Explanation: Kabir is widely believed to have become one of the many disciples of the Bhakti poet-sant Swami Ramananda in Varanasi.

Explanation: Chand Bibi was an Indian Muslim official and champion. She was the Regent of Bijapur from 1580 to 1590 and the Ruler of Ahmednagar from 1596 to 1599.

13. The Nagarjuna Inscriptions provide information about:

(D) None of the above

Explanation: The inscriptions are associated with the blossoming of Buddhist structures and the rule of the Ikshvaku, in the period covering approximately 210-325 CE.

14. Who laid the foundation of Portuguese power In India?

Explanation: Alfonso de Albuquerque who replaced Almeida as the governor in 1509 AD, and captured Goa from the Sultan of Bijapur in 1510 AD is considered the real founder of the Portuguese power in India.

15. Who gave the title 'Sardar' to Vallabhbhai Patel?

Practicing Important Topics & Questions of the RRB Group D Exam can help you in many ways in your exam preparation. Remember that there are no sectional time limits and no sectional cut-offs. Your job is to simply maximize your score however you can.