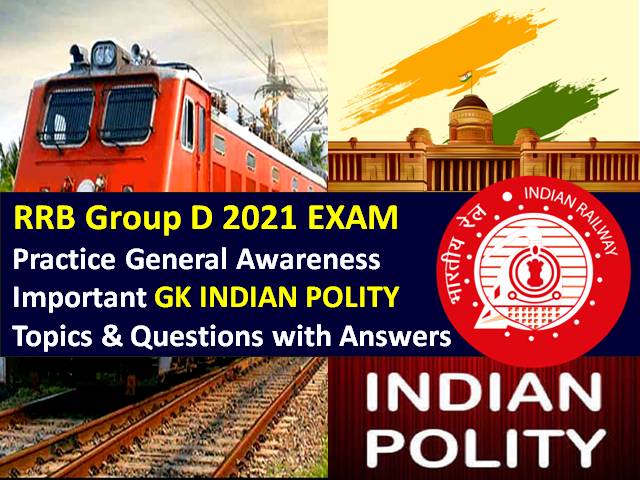 General Awareness/GK is considered to be one of the highest-scoring sections of the RRB Group D 2021 Exam and will be of 20 marks. Let’s look at the important General Awareness/GK - Indian Polity topics that have appeared frequently in RRB GROUP D Exam over the last few years.

1. Which of the following is a constitutional body?

Explanation: Except Finance Commission; none of the body is a constitutional body because others all bodies are established after an act of the Parliament.

2. Which of the following is not matched correctly?

Explanation: Seventh Five Year Plan was launched during the period of 1985 to 1990.This plan was started by Rajiv Gandhi government when Dr. Manmohan Singh was Deputy Chairman of planning commission.

3. Which of the following Acts under the Indian Constitution is described by Article 21A?

Explanation: Article 21A of the Indian constitution covers Right to Education. The State shall provide free and compulsory education to all children of the age of six to fourteen years.

4. The Prime Minister is the ex-officio President of

Explanation: Prime Minister of India is the ex-officio President of the Council of Scientific and Industrial Research.

Explanation: Article 368 in the Part XX of the Indian constitution deals with the powers of the parliament to amend the constitution and its procedure.

6. In which of the following case, a special majority is used in the Parliament?

a) Removal of Vice President

b) For removing Speaker & Deputy Speaker of the Lok Sabha

c) Acquisition and Termination of Citizenship

Explanation: Acquisition and Termination of Citizenship

7. Parliament House in Delhi was constructed during

Explanation: Parliament House or Sansad Bhavan was constructed during 1921-1927.

8. What does “Satyameva Jayate” mean?

Explanation: Satyameva Jayate -“Truth alone triumphs." is a mantra from the ancient Indian scripture Mundaka Upanishad. Upon independence of India, it was adopted as the national motto of India. It is inscribed in script at the base of the national emblem.

9. What does “Bicameral Legislature” mean?

10. In how many ways the Constitutional amendment in India can take place?

Explanation: The Rajya Sabha or Council of States is the upper house of the bicameral Parliament of India.

12. Chief Election Commissioner of India can be removed from the office by:

Explanation: Election Commissioner can be removed by the President on the basis of a resolution passed to that effect by both the Houses of Parliament with special majority, either on the ground of proved misbehaviour or incapacity.

Practicing Important Topics & Questions of the RRB Group D Exam can help you in many ways in your exam preparation. Remember that there are no sectional time limits and no sectional cut-offs. Your job is to simply maximize your score however you can.