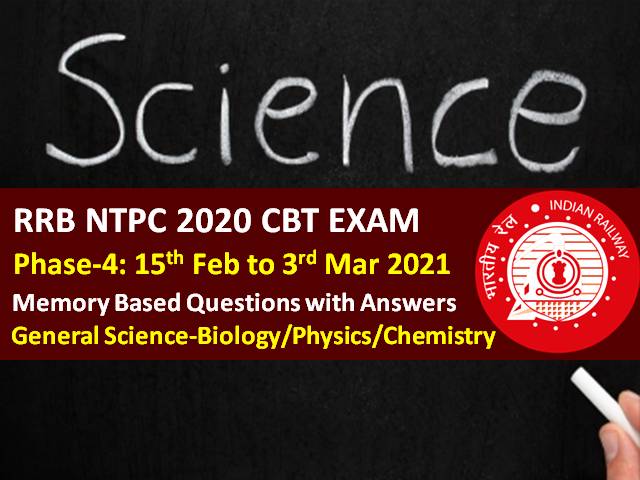 RRB NTPC 2021 Exam Memory Based General Science Questions (Phase-4): RRB NTPC 2021 Phase-4 CBT Exam has been commenced from 15th Feb 2021 and will be conducted till 3rd March 2021 for around 16 lakh Candidates across different exam centres in India. Computer Based Test (CBT) is being conducted for the recruitment of RRB Non-Technical Popular Categories (NTPC) 35281 Vacancies (Graduate & Under-Graduate Posts) in two shifts.

In this article, we are going to share the important memory-based General Science (GS) Section (Biology/ Physics/ Chemistry) Questions as per the feedback received by the candidates who have appeared for RRB NTPC 2021 Online Exam. Candidates are advised to definitely cover these questions for scoring high marks in the Exam. Let’s have a look at the Important Questions that are being covered in the RRB NTPC 2021 Exam:

3. Retinol is found in which vitamin?

4. Which of the following is not a Part of Carbon?

6. In 2011, which chemical was banned by Supreme Court of India?

7. Form of farming where trees are planted mainly to protect animals or crops from cold winds, but also to give shade in hot weather:

9. Satellite launched in 2018 that was the heaviest amongst all in India?

Answer: The Nobel Prize in Physiology or Medicine 1968 was awarded jointly to Robert W. Holley, Har Gobind Khorana and Marshall W. Nirenberg "for their interpretation of the genetic code and its function in protein synthesis."

12. Which of the following is known as Foolish Rice Seedlings?

Answer: A disease of rice known as Bakanae or “foolish seedling” disease in which the plants grew inordinately long, became weak, and eventually fell over and died.

13. Norman Borlaug Award is given in which field?

14. Day on which Earth is at the farthest point in its orbit around the sun is known as:

15. Touch-me-not plant is of which Plant Kingdom?

Answer: Family: Fabaceae, Subfamily: Mimosoideae Touch-me-not (Mimosa pudica) is also called as a sensitive plant or sleepy plant because it folds its leaves when touched or exposed to heat

18. Which one of the following is the Bacterial Disease?

Answer: AIDS (Amongst the options)

20. Which organ control the respiration?

22. Deficiency of Vitamin B9 causes which disease?

23. Outer Layer of Earth is called: