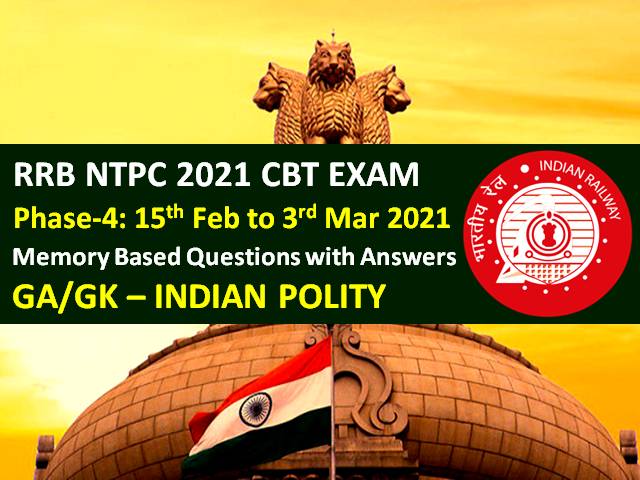 RRB NTPC 2021 Exam Memory Based Indian Polity Questions with Answers (Phase-4): RRB NTPC 2021 Phase-4 CBT has been commenced from 15th February 2021 and will be conducted till 3rd March 2021 for around 16 lakh Candidates across different exam centres in India. Phase-5 will be conducted from 4th to 27th March 2021. Computer Based Test (CBT) is being conducted for the recruitment of RRB Non-Technical Popular Categories (NTPC) 35281 Vacancies (Graduate & Under-Graduate Posts) in two shifts.

In this article, we are going to share the important memory-based General Awareness (GA)/General Knowledge (GK) - Indian Polity Questions as per the feedback received by the candidates who have appeared for RRB NTPC 2021 Online Exam. Candidates are advised to definitely cover these questions for scoring high marks in the Exam. Let’s have a look at the Important Questions that are being covered in the RRB NTPC 2021 Exam:

1. Five year plan which ended in 2017 is which number of five-year plan?

4. Which Indian Freedom Fighter made Hindi as the Official Language of India?

5. National Food for Work Programme was started in:

6. How many cities are included in HRIDAY Yojana?

7. Who designed the Indian Rupee Symbol?

8. When did India became the member of United Nations?

Answer: In 1991, the 69th Constitutional Amendment granted special state to Delhi and it was declared the National Capital Territory while the Lieutenant Governor was nominated the Administrator of Delhi. It created a state assembly and council of ministers for the state.

10. Which Scheme of Prime Minister is carried on by NABARD?

11. 124th Ammendment Bill of Indian Constitution is related to: