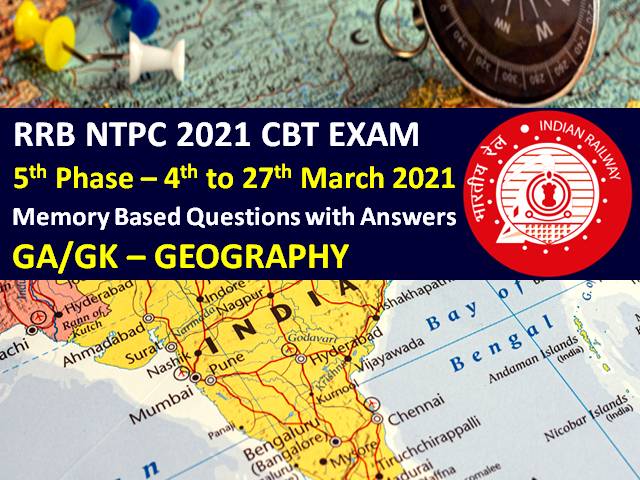 RRB NTPC 2021 Exam (Phase-5) Memory Based Geography Questions with Answers: RRB NTPC 2021 Phase-5 CBT has been commenced from 4th March 2021 and will be conducted till 27th March 2021 for around 19 lakh Candidates across different exam centres in India. Computer Based Test (CBT) is being conducted for the recruitment of RRB Non-Technical Popular Categories (NTPC) 35281 Vacancies (Graduate & Under-Graduate Posts) in two shifts.

In this article, we are going to share the important memory based General Awareness (GA)/General Knowledge (GK) - Geography Questions as per the feedback received by the candidates who have appeared for RRB NTPC 2021 Online Exam. Candidates are advised to definitely cover these questions for scoring high marks in the Exam. Let’s have a look at the Important Questions that are being covered in the RRB NTPC 2021 Exam:

2. Indian Railways has been divided into how many zones?

Answer: 17 - For administrative purposes, Indian Railways is divided into 17 Zones.

3. Which Indian State is the largest producer of Cotton?

Answer: Gujarat is the largest cotton producing state in India with a production of 125 Lakh Bales.

4. Which Indian State is the largest producer of Black Pepper?

5. Bhavai Dance Form is from:

Answer: Bhavai is a genre of folk dance popular in Rajasthan state in western India.

7. Kathakali Dance Form is from:

9. Only Temple of Brahma is located in:

10. Dhauladhar Range belongs to which part of Himalaya?

Answer: The Dhauladhar range (lit. The White Range) is part of a lesser Himalayan chain of mountains. It rises from the Indian plains to the north of Kangra and Mandi. Dharamsala, the headquarters of Kangra district, lies on its southern spur in above the Kangra Valley, which divides it from Chamba.

Answer: The Sone originates near Amarkantak in Anuppur district of Madhya Pradesh.

12. Durand Line is between which countries?

13. Headquarters of UNO is located in:

14. Brihadishvara Temple is located in:

Answer: It is located on the south side of Kaveri river in Thanjavur in the Indian state of Tamil Nadu.

Answer: In 2019, Pravasi Bhartiya Divas was held on 21-23 January in Varanasi, Uttar Pradesh.

18. Mountains generated due to landslides?

Answer: Fold mountains are created where two or more of Earth's tectonic plates are pushed together.

Answer: Mundra Thermal Power Station is located at Mundra in Kutch district in the Indian state of Gujarat.

21. Cannes film Festival is conducted in which country?

22. National Institute of Nutrition is located in:

24. Belgaum is part of which State?

25. Dwarka Mandir is located at the banks of which river?

26. Which river is also known as Ganga of South India?

27. Panchavati Pilgrimage is located in which State?

Answer: Rani ki Vav or Ranki vav ('Queen's stepwell') is a stepwell situated in the town of Patan in Gujarat state of India.

29. Pongal Festival is from which State?

30. Headquarters of Union Bank of India: