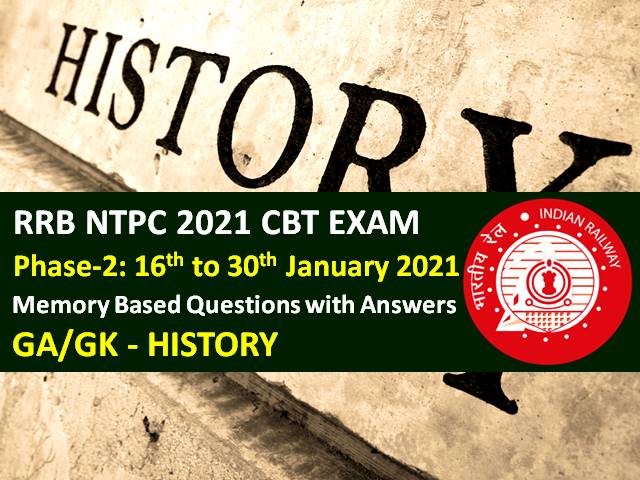 RRB NTPC 2021 Exam (Phase-2) Memory Based History Questions with Answers: RRB NTPC 2021 Phase-2 CBT Exam has been commenced from 16th January 2021 and will be conducted till 30th January 2021 for around 27 lakh Candidates across different exam centres in India. Computer Based Test (CBT) is being conducted for the recruitment of RRB Non-Technical Popular Categories (NTPC) 35281 Vacancies (Graduate & Under-Graduate Posts) in two shifts.  RRB NTPC 2021 Phase-3 Exam will be conducted from 31st Jan to 12th Feb 2021 for around 28 Lakh candidates.

In this article, we are going to share the important memory based General Awareness (GA)/General Knowledge (GK) - History Questions as per the feedback received by the candidates who have appeared for RRB NTPC 2021 Online Exam. Candidates are advised to definitely cover these questions for scoring high marks in the Exam. Let’s have a look at the Important Questions that are being covered in the RRB NTPC 2021 Exam:

2. Governor General at the time of Rowlatt Act:

Answer: Rajasthan - The Panchayat Raj System was first adopted by the state of Rajasthan in Nagaur district on 2nd Oct 1959.

Answer: The Third Anglo–Mysore War (1790–1792) was a conflict in South India between the Kingdom of Mysore and the East India Company, Kingdom of Travancore, Maratha Empire, and the Nizam of Hyderabad.

Answer: Annie Besant was the first woman President of the Indian National Congress.

9. When did Mahatma Gandhi came to India from Africa?

10. After Jallianwala Bagh Massacre which commission was formed by British Government?

12. Who Designed Gateway of India?

13. Which of the following policy was introduced by Lord Dalhousie?

14. What was the seal on the Harappan Civilization coin?

16. The Lucknow session of Indian National Congress that took place in 1916 was presided by:

Answer: Shah Jahan - The construction of the Agra fort was started around 1565, when the initial structures were built by the Mughal Emperor Akbar, and subsequently taken over by his grandson Shah Jahan, who added most of the marble creations to the fort.

19. Who established the city of Fatehabad?

20. When was the first round table conference held?

21. When did the Portuguese capture Goa?

Answer: Maulana Hasrat Mohani in 1921, it was popularized by Bhagat Singh.

24. Father of Green Revolution in India:

Answer: M.S. Swaminathan - In the late 1960s, M.S. Swaminathan, a plant geneticist, helped design and lead the Green Revolution, a huge development effort that in just a few years brought food self-sufficiency to India, which had suffered from deadly famines for decades.

25. Formation of Maharashtra and Guajrat:

26. One question related to the slogan “Jai Jawan Jai Kisan”:

Answer: Jai Jawaan Jai Kisaan was a slogan of the second Prime Minister of India Lal Bahadur Shastri in 1965 at a public gathering at Ramlila Maidan, Delhi.

27. Clement Atlee came to India through which commission?

28. Visva-Bharati University was established by whom?

29. Ahmednagar Queen who fought against Akbar?

30. Battle of Chausa is fought between:

Answer: The Gandhi–Irwin Pact was a political agreement signed by Mahatma Gandhi and Lord Irwin, Viceroy of India, on 5 March 1931 before the second Round Table Conference in London.

Answer: Faizpur - The first rural (and 51st national) conference of Indian National Congress was held in Faizpur in 1936, Pandit Nehru was President and Rajmal Lalwani was the treasurer for that conference.