Should you drop-out of college to be the next Mark Zuckerberg?

The rising number of college dropouts is raising the question, has the global trend of dropping out to be successful caught up with India? 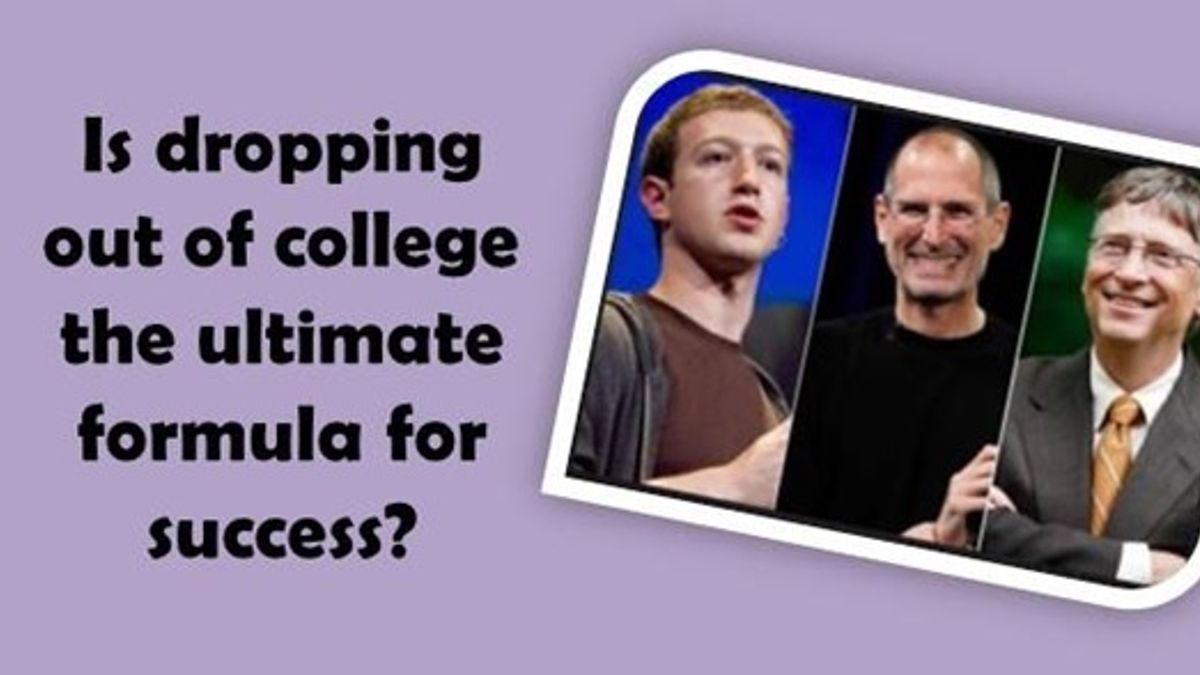 Should you drop-out of college to be the next Mark Zuckerberg?

In the recent years, the proposition of success for college students has witnessed a major change. It seems as if the global trend of dropping out of college to be successful has finally caught up with India. Any conversation on the topic in a social setting is flooded with the names of Mark Zuckerberg, Bill Gates, Michael Dell and Steve Jobs. All of them being college dropouts and big names in their respective fields.

In the Indian context this long dormant conversation has now been fuelled by recent cases of successful entrepreneurs and their widely known start-ups. Entrepreneurs who also happen to be college dropouts, some even from prestigious institutions like IITs. To name a few would include the likes of RiteshAggarwal (co-founder of Oyo Rooms), Kunal Shah (founder of Freecharge) and  KailashKhattar (Founder and CEO of Quick Heal Technologies). With this rising trend, it becomes a necessity for college students to understand and evaluate this phenomenon before joining the bang wagon of college dropouts. Below, we shall try to decode this trend and all the facets related to it in detail.

Why Do People Drop Out Of College?

Students nowadays are under the perception that the structural college education is hindering in their overall skill development. Abundance of theoretical knowledge and lack of proper practical learning is the main reason as quoted by students for not preferring college education. They believe that college does not equip them with enough workplace skills for good employment opportunities.

How accurate are these beliefs and accusations is, a debatable topic. However, one cannot debate the fact that education is a proven path towards economic, social and intellectual opportunities. One can surely blame the education system for once but never education in itself. Even the big college dropout names that we usually quote, abandoned the institutions they had enrolled in and  not education. The very key to their success was their hunger for knowledge and their passion for learning from anywhere and everywhere they could. Even then the importance of college education cannot be undermined.

Bill Gates: Don't be like me, don't drop out of college

As quoted by Mr. Bill Gates, “Although I dropped out of college and got lucky pursuing a career in software, getting a degree is a much surer path to success”. He believes that college graduates are more likely to find a rewarding job and earn higher income than, if they didn’t have degrees. He is of the opinion that, "The problem isn’t that not enough people are going to college but, that not enough people are finishing".

If by any chance you are planning todrop out of college to pursue your own entrepreneurial dreams, step back and think for a second. What better place is there than a college to develop and foster your dreams at limited risk? Colleges have an abundance of unique knowledge, resources, supportive peers, competitive environment and experiential learning opportunities.

Contrary to popular belief, universities and colleges are places that allow a student's imagination to flourish. It enables them to form connections, learn new things and gives them a new perspective of things. Universities act to provide students with frameworks to foster entrepreneurship. They support students when they are most open to new ideas, passionate about their beliefs, and interested in shaping the world.

To Drop Out or Not to Drop out?

Looking at the Indian society by and large, even though the start-up culture has seen a great boom, not all of these ventures make it to success. Each year crowd-funding sites like ‘Indiegogo’ see numerous start-up registrations. But a very few of them are able to achieve success. A great many of them are lost in the influx of newer ideas each passing day.

Dropping out of college is a very personal decision. But one should consider both the pros and cons of dropping out. One big advantage of dropping out would be that starting at an early age, you will have a considerable work experience by the time your peers graduate from college. You haggle, go to random conferences, meet people and get weird jobs with the aim to learn at the job and make memories while getting experience along the way.

The cons of dropping out, as mentioned before, are that if you are unsuccessful in your venture, you are left without a formal degree. Getting a job after that can prove to be a very tedious task as people don't take dropouts seriously, unless of course you have some exceptional talents. Moreover you miss out on the experience of college life, the fun, last minute assignment submissions, bunking classes, well all this won't matter much if your start up is successful. The college life in the Indian society is very different from that on the global level. It's the time when one gets to experiment and explore the depths of one's capabilities.

Dropping out of college is not the sure shot path to success. Most people who dropped out and made it big are an exception. Their never ending thirst for knowledge and the undying passion to realise their dreams was what kept them going. They never abandoned education but the institutions. Most of the dropouts following entrepreneur dreams followed their passions while in college. They developed and researched their ideas while in college, where the risk of losses was very low compared to an actual marketplace.

According to the Forbes, 63 out of 400 richest entrepreneurs are college dropouts. Indeed an impressive figure but what about the remaining 337? It's a pretty big pool of non college dropouts, a fact that cannot be ignored. Dropping out has its benefits but one should take that path only if one is ready to face the challenges and the difficulties that come with this decision.