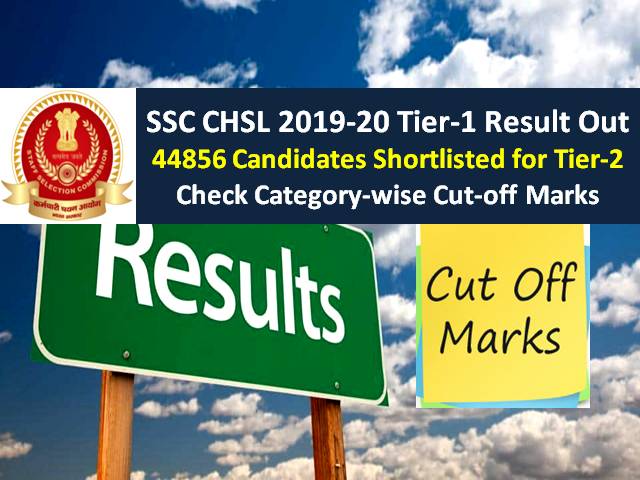 SSC CHSL Result 2019-20 Tier-1 Marks Released @ssc.nic.in (Get Direct Link to View Score): SSC has declared the result of Combined Higher Secondary Level (CHSL) Tier-1 (10+2) 2019-20 Exam held from 17th to 19th March 2020, 12th to 16th October 2020, 1th to 21st October 2020 and on 26th October 2020 in the Computer Based Mode at various centres all over the country in online mode for Recruitment of Postal Assistants (PA), Sorting Assistants (SA), JSA and Lower Divisional Clerks (LDC). Based on marks scored in SSC CHSL Tier-1 Computer Based Examination (CBE) candidates have been shortlisted, Category-wise to appear for SSC CHSL Tier-2 (Descriptive Paper). SSC has fixed separate cut-offs for the posts of LDC, JSA, PA and SA.

The candidates may take a print out of their respective Final Answer Keys alongwith respective Question Paper (s) by using the link given below. This facility will be available for the candidates for a period of one month from 22nd Jan 2021 to 21st Feb 2021.

Let’s have a look at the Category-wise details of candidates who have provisionally qualified for Tier-2 (Descriptive Paper) and the cut-offs applied for each category in the Tables given below:

No vacancies have been reported for the posts of DEO and DEO Grade ‘A’. Therefore, only 01 cut-off has been fixed by the Commission i.e. for the post of LDC/JSA/PA/SA

SSC CHSL Tier-2 2019-20 Descriptive Paper is scheduled to be held on 14th February 2021. The Admit Cards of the qualified candidates will be uploaded on the websites of the respective Regional Offices approximately 7 days before the conduct of the Tier-2 Exam.