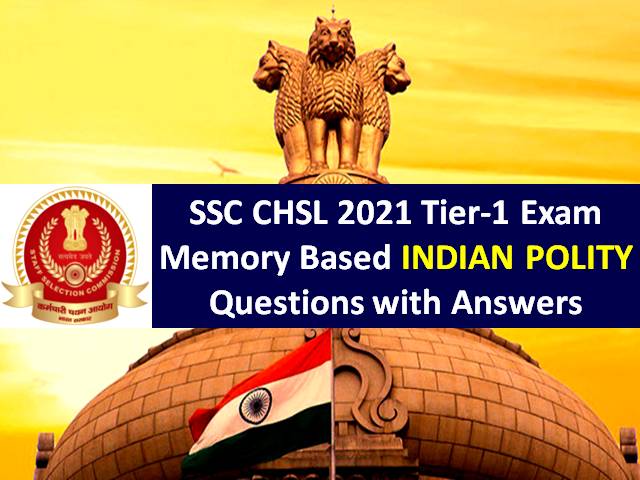 SSC CHSL 2021 Exam Memory Based Indian Polity GA Questions with Answers: SSC CHSL 2020-21 Exam (Tier-1) was held from 12th to 19th April 2021 across different examination centres in India and has been postponed from 20th April 2021 onwards. In this article, we are going to share the important memory-based INDIAN POLITY questions as per the feedback received by the candidates who have appeared for SSC CHSL Tier-1 2021 Exam. Candidates are advised to definitely cover these questions for scoring high marks in the Exam.

Let’s have a look at the Important Indian Polity Questions that are being covered in the SSC CHSL 2021 Tier-1 Exam:

1. Who is the New Chief Minister of Uttarakhand?

2. How many members are nominated by President in Rajya Sabha?

Answer: 12 - The Rajya Sabha should consist of not more than 250 members - 238 members representing the States and Union Territories, and 12 members nominated by the President.

3. Which minister launched an app for migrant labor for a pan-India survey?

4. Rajya Sabha was founded in which year?

Answer: the power of Presidential Pardon - Article 72 says that the President shall have the power to grant pardons, reprieves, respites or remissions of punishment or to suspend, remit or commute the sentence of any person convicted of any offence.

6. Who is the Present Minister of Agriculture and Farmers' Welfare?

7. Who is the Deputy Election Commissioner of India?

8. Who is the Chief Justice of Telangana High Court?

9. Najma Heptulla is the Governor of which State?

Answer: The Commission for Agricultural Costs & Prices (CACP) is an attached office of the Ministry of Agriculture and Farmers Welfare, Government of India. It came into existence in January 1965.

12. Fundamental Rights is taken from which country?

13. Fundamental Duties is added in the Indian Constitution with which Amendment Act?

Answer: Justice S. Muralidhar is the Chief Justice of the Orissa High Court since 4 January 2021.

Answer: The Central Industrial Security Force (CISF) got a new chief in Subodh Kumar Jaiswal, who took over as the 28th director general of the force.