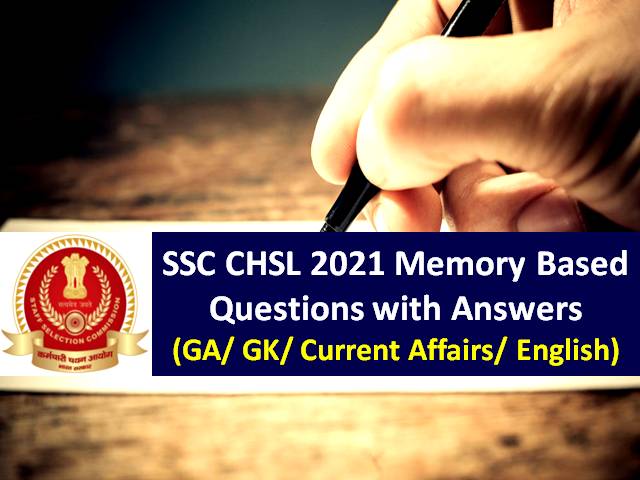 SSC CHSL 2021 Tier-1 Exam Memory Based Questions with Answers: SSC CHSL 2020-21 Exam (Tier-1) was held from 12th to 19th April 2021 across different examination centres in India. In this article, we are going to share the important memory-based questions as per the feedback received by the candidates who have appeared for SSC CHSL Tier-I 2021 Exam. Candidates are advised to definitely cover these questions for scoring high marks in the Exam.

Let’s have a look at the Important Questions that are being covered in the SSC CHSL 2021 Tier-1 Exam:

Answer: Justice S. Muralidhar is the Chief Justice of the Orissa High Court since 4 January 2021.

Answer: The Central Industrial Security Force (CISF) got a new chief in Subodh Kumar Jaiswal, who took over as the 28th director general of the force

Capital of Dadra and Nagar Haveli:

Satish Vyas is related to:

Answer: Mark Rutte AC is a Dutch politician serving as the prime minister of the Netherlands since 2010.

Beri Beri caused due to which vitamin deficiency?

Answer: Thiamine deficiency, or beriberi, refers to the lack of thiamine pyrophosphate, the active form of the vitamin known as thiamine (also spelled thiamin), or vitamin B-1.

Which of the following is a good conductor of electricity?

Which of the following river does not fall in the Arabian Sea?

‘Wings of Fire’ is the autobiography of:

Tel and Ong are the tributaries of which of the following rivers?

Jog falls is situated in which State?

Answer: Vikram Limaye is the Managing Director and CEO of the National Stock Exchange of India Limited.

Who is the new DGP of Andaman & Nicobar?

Who won the Dadasaheb Phalke Award 2019?

ICC has announced the ODI player of the decade:

Who was the first country to issue banknotes?

Idiom Meaning - A bolt from the blue

Wooden Satellite belongs to which country?

Najma Heptulla is the Governor of which State?

Answer: The Commission for Agricultural Costs & Prices (CACP) is an attached office of the Ministry of Agriculture and Farmers Welfare, Government of India. It came into existence in January 1965.

Who is the Chairman of SEBI?

Who is the President of All India Chess Federation?

Tamasha Dance is from which State?

Answer: Maharashtra - Tamasha is a traditional form of Marathi theatre, often with singing and dancing, widely performed by local or travelling theatre groups within the state of Maharashtra, India. It has also been the subject of several Marathi films.

Neutron was discovered by:

The longest river of Nepal:

Answer: Karnali - The Karnali is the longest river of Nepal, flowing from the north to south through deep gorges to the Indian state of Uttar Pradesh, where it meets the Ganga.

Ian Bell belongs to which country?

Answer: Ian Ronald Bell MBE is a former English cricketer who played international cricket in all formats for the England cricket team.

Gateway of India was built in honor of:

Answer: King George V and Queen Mary on their visit to India in 1911

Answer: Farads - Capacitance is expressed as the ratio of the electric charge on each conductor to the potential difference (i.e., voltage) between them. The capacitance value of a capacitor is measured in farads (F), units named for English physicist Michael Faraday (1791–1867). A farad is a large quantity of capacitance.

Jhora Dance form is of which state?

Statue of Unity located in:

Answer: Gujarat - The Statue of Unity comes under the category of world's tallest statues and is located 3.5 km from a small town known as Kevadiya in Gujarat, India.

Khwaja Moinuddin Chishti Dargah is in:

Statue of Liberty is along which river?

Who is the Chairman of SAIL?

Fundamental Rights is taken from which country?

Patkai Hill is located in:

Answer: The Patkai Mountain Range is located at the India's North Eastern Border with Burma or Myanmar.

Tehri Dam is located in:

Fundamental Duties is added in Indian Constitution with which Amendment Act?

When alkali reacts with water then which gas forms?

Name of Military Exercise between India and Sri Lanka:

Which of the following Metal is found in the human body?

1. Who is the New Chief Minister of Uttarakhand?

2. How many members are nominated by President in Rajya Sabha?

Answer: 12 - The Rajya Sabha should consist of not more than 250 members - 238 members representing the States and Union Territories, and 12 members nominated by the President.

4. Which minister launched an app for migrant labor for a pan-India survey?

5. Which leader led the revolt of 1857 from Northeast India?

Answer: Barium is used to create green colors in fireworks.

8. In which national park hot air balloon safari has started?

9. Which countries are part of Passex Exercise Dec 2020?

Answer: The Indian Navy (IN) undertook a Passage Exercise (PASSEX) with Russian Federation Navy (RuFN) in the Eastern Indian Ocean Region (IOR) from 4 to 5 December 2020.

10. Hoysaleswara Temple is located in which State?

11. According to census 2011, the lowest population density is of which state?

12. Rajya Sabha was founded in which year?

13. One Word Substitute - ‘a place where coins are made”

2. World TB Day is observed on:

3. Who is known as the Grand Old Man of India?

Answer: the power of Presidential Pardon - Article 72 says that the President shall have the power to grant pardons, reprieves, respites or remissions of punishment or to suspend, remit or commute the sentence of any person convicted of any offence.

6. According to Census 2011, which Indian District has the highest literacy rate?

Answer: sandy loams - The best soils for cashew are deep and well-drained sandy loams without a hard pan.

9. Which Indian Batsman has played most test matches?

10. Largest Floating Solar Park in located in which State?

11. What is the chemical formula of Bluevitriol?

Answer: The chemical formula of blue vitriol is CuSO4​.5H2​O. It is also known as crystalline copper sulphate or, Cu(II) sulphate pentahydrate.

12. Who is the Present Minister of Agriculture and Farmers' Welfare?

13. Which City is located along Saryu River?

Answer: Ayodhya, in Uttar Pradesh - The Sarayu is a river that originates in Uttarakhand and flows through Uttar Pradesh in India. It is a tributary of the Sharda River.

14. Who is the Deputy Election Commissioner of India?

15. Who is the Chief Justice of Telangana High Court?

16. Gandhi Sagar Dam is situated in:

Answer: The Gandhi Sagar Dam is one of the four major dams built on India's Chambal River. The dam is located in the Mandsaur, Neemuch districts of the state of Madhya Pradesh.

17. What is the chemical name of Vitamin C?

Answer: Ascorbic acid is the chemical term for vitamin C.

Answer: Gopala - Pala dynasty, ruling dynasty in Bihar and Bengal, India, from the 8th to the 12th century. Its founder, Gopala, was a local chieftain who rose to power in the mid-8th century during a period of anarchy.

Answer: Someone who becomes happy at hopes provided based on false facts.