Staff Selection Commission (SSC) has postponed the online exam for CHSL 2021. The decision has been taken due rising number of cases of Corona Virus (COVID - 19)

SSC CHSL Exam Postponed 2021 for WB -Staff Selection Commission (SSC) has postponed the exam of Combined Higher Secondary Level Exam Paper 1 (SSC CHSL) for the candidates who opted their centres in West Bengal in view of the surge in Covid-19 case. SSC CHSL WB Exam 2021 was scheduled to be held on 21 May and 22 May.

Earlier, Staff Selection Commission (SSC) has postponed the online exam which is scheduled to be held from today i.e. on 20 April 2021 to 27 April 2021. The decision has been taken due rising number of cases of Corona Virus (COVID - 19).

SSC CHSL Notice reads, “Due to the surge in COVID-19 cases across the country, the Commission has decided to defer the Combined Higher Secondary (10+2) Level Examination (Tier-I), 2020 with effect from 20-04-2021. Fresh dates for the balance candidates of the said examination will be intimated in due course.”

Indian is amongst worst country that have been affected by COVID - 19. It was necessary to postpone the exam for the safety of the candidates. 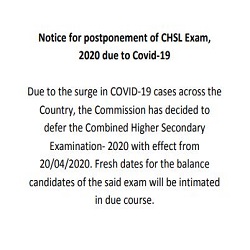 It is not mentioned in the official website. However, it is expected that SSC will upload new admit card with new date and time.

Is SSC CHSL on 20 April Postponed ?