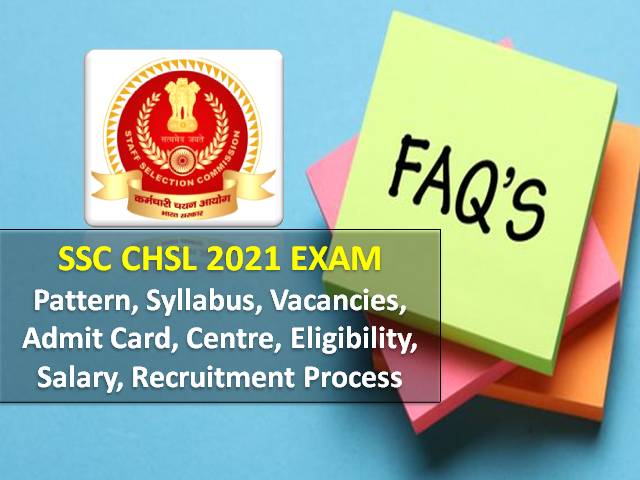 So, let’s look at those SSC CHSL Frequently Asked Questions (FAQs) and their answers in detail:

Answer: The official notification for SSC CHSL 2020-21 Recruitment was released on 6th November 2020. Final selection and allocation of Ministries/ Departments/ Offices to the candidates qualified in the Document Verification will be made on the basis of their performance in Tier-I+Tier-II Examinations and the preference of Posts/ Departments confirmed by them at the time of Document Verification.

2. How many VACANCIES have been announced under SSC CHSL 2021 Recruitment?

4. What is the AGE LIMIT & UPPER AGE LIMIT RELAXATION for SSC CHSL 2021 Recruitment as per the Official Notification?

Answer: The Age limit for SSC CHSL Posts is 18-27 years. Permissible relaxation in the Upper age limit for different categories is as under:

5. What are the EDUCATIONAL QUALIFICATIONS required for SSC CHSL 2021 Exam?

Answer: Below is the educational qualification details for the different SSC CHSL 2020-21 Posts:

6. What is the Selection Process for SSC CHSL 2021 Recruitment?

Answer: SSC CHSL 2020-21 Tier-I exam is an Objective Multiple Choice Exam that will be conducted in online mode. The exam consists of four sections having 100 questions (25 questions in each section) of 200 marks (maximum 50 marks in each section). The duration of the Tier-1 exam will be 60 minutes (80 Minutes for candidates eligible for scribes).

Answer: SSC CHSL 2020-21 Tier-II will be a Descriptive Paper of 100 Marks in Pen and Paper Mode. The duration of the Descriptive Paper would be for one hour (20 minutes compensatory time will also be provided to the candidates eligible for scribes). The performance in Tier-II would be included for preparing merit. The paper will have to be written either in Hindi or in English. Part paper written in Hindi and Part in English will be awarded zero marks.. The section-wise details of the exam are shown in the table given below:

Candidates will be shortlisted for Tier-III Examination on the basis of their performance in Tier-I + Tier-II subject to having scored a minimum of 33% marks in the Tier-II Examination.

Candidates eligible for scribe will be given a compensatory time of 5 minutes. Therefore, the duration of the Skill Test for such candidates will be 20 minutes.

Passage Dictators will be provided to those VH candidates for the Typing test who have opted for Scribe in the online Application Form. The Passage Dictator will read out the passage to VH candidate within the allotted time period.

11. In which medium of language SSC CHSL 2021 exam will be conducted?

Answer: Tier-1: The exam will be conducted in both Hindi & English languages except the English Language and Comprehension section.

Tier-2: The paper will have to be written either in Hindi or in English. Part paper written in Hindi and Part in English will be awarded zero marks.

Tier-3: The medium of the Typing Test will be Hindi and English. The candidates will have to opt for the medium of Typing Test (i.e. either Hindi or English) in the online Application Form.

Answer: No, there will be no sectional cut-off in the exam.

13. Where will the SSC CHSL 2021 Application Status & Admit Cards be released?

Answer: The application status & admit cards will get released on the regional websites of Staff Selection Commission listed below in the table.

15. What is the current PAY SCALE and SALARY Structure for SSC CHSL Posts after the 7th Pay Commission?

Answer: Candidates can prepare for SSC CHSL 2021 Exam by practicing the previous year question papers and mock tests. Get the exam tips and study material from the links given below:

Answer: SSC officially will release the answer keys of the SSC CHSL Tier-I exam on their website after 10 to 15 days of the successful completion of the respective exams. Candidates can calculate their approximate marks and expected rank based on the answer key released by SSC.

Answer: The Staff Selection Commission (SSC) releases the results in three stages, i.e., after the completion of each exam tier-wise. The candidates are shortlisted for the next round after clearing the previous round. Candidates can check the result from the official website, ssc.nic.in, as and when the results are declared.

Will there be a negative marking in the SSC CHSL 2021 Tier-1 Exam?

What is the Exam Pattern of SSC CHSL Recruitment?

Who can apply for SSC CHSL Exam?

How many Vacancies Announced under SSC CHSL 2020-21 Recruitment?