SSC CHSL 2020 Exam Update (Application Status Link Active Now)-Tier 1 Exam from 12th October Onwards:: SSC CHSL 2019-2020 Exam was postponed from 20th March 2020 and the exam was conducted in online mode from 17th to 19th March 2020 across different Exam Centres. SSC CHSL 2019-20 Application Status link has been activated and Admit Card has been released on the regional websites of SSC.

Every year lakhs of candidates apply for the SSC CHSL Exam with the aspiration of getting a Government Job. To keep you updated about the latest notifications on SSC CHSL 2019-2020 Examination, we have compiled all the relevant and the most recent information. Let’s look at the list of topics covered below in the article:

The Staff Selection Commission will hold a competitive examination for recruitment to the posts of Lower Divisional Clerk/ Junior Secretariat Assistant, Postal Assistant/ Sorting Assistant and Data Entry Operators for various Ministries/ Departments/ Offices of the Government of India. SSC CHSL Tier-I Online Exam is scheduled to be held from 12th to 16th October 2020, 19th to 21st October 2020 and 26th October 2020 and Tier-2 Descriptive Paper postponed exam dates are yet to be announced.

Below are some important eligibility criteria which a candidate must fulfill in order to appear for the SSC CHSL 2019-20 Exam:

Age limit for SSC CHSL Posts is 18-27 years. Permissible relaxation in Upper age limit for different categories is as under:

Below is the brief educational qualification details for the different SSC CHSL 2019-20 Posts:

All candidates who registers for SSC CHSL 2020 Exam within stipulated time will be assigned an e-admit card/hall ticket/call letter to appear in the Tier-I Computer Based Examination. Admit Cards for calling candidates to appear in Tier-I as well as all subsequent tiers/ stages of examination will not be sent by post. Admit Cards for all stages of examination will be issued online on the websites of concerned Regional/ Sub-Regional Office of the Commission. Candidates are advised to regularly visit the website, i.e., www.ssc.nic.in to get the updated notifications.

4893 Vacancies have been announced tentatively for the SSC CHSL 2019-20 Recruitment Process. 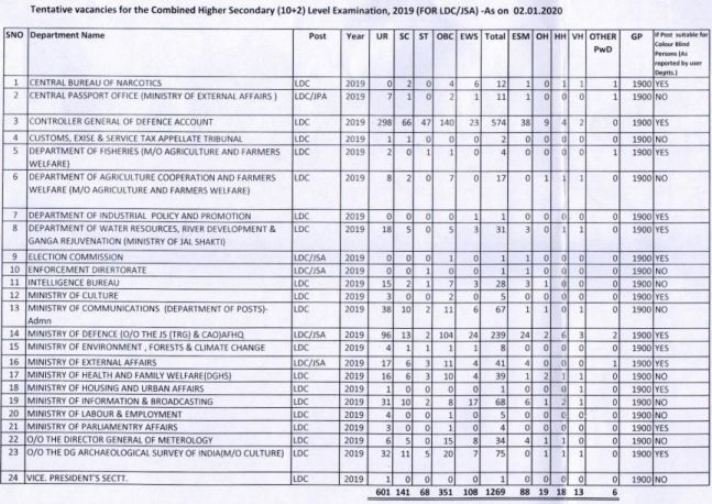 SSC CHSL 2019-20 Tier-I exam will be an Objective Multiple Choice Exam which will be conducted online. The exam comprises of four sections having 100 questions (25 questions in each section) which will account for a total of 200 marks (maximum 50 marks in each section). The time duration of Tier-1 exam will be 60 minutes. The section-wise details of the exam are shown in the table given below:

Candidates can download the previous year papers along with the answer keys from the link given below:

Candidates can click on the links given below to check the important topics section-wise:

Staff Selection Commission officially releases the answer keys of SSC CHSL Tier-I and Tier-II exams on their website after 10 to 15 days of the successful completion of the respective exams. Candidates can calculate their approximate marks and expected rank based on the answer key released by SSC.

Staff Selection Commission (SSC) releases the results in four stages, i.e., after the completion of each exam tier-wise. The candidates are shortlisted for the next round after clearing the previous round. Candidates can check the result from the direct link to official SSC website as and when the results are announced.

What is the Salary, Job Profile & Promotion Policy for SSC CHSL LDC/DEO/JSA/PA/SA Posts?

What is the Application Process for SSC CHSL 2020 Recruitment?

Check how to apply online from the given link: https://www.jagranjosh.com/articles/ssc-chsl-apply-online-1552983603-1

What is the Eligibility Criteria for SSC CHSL 2020 Recruitment?

What is the Exam Pattern & Syllabus of SSC CHSL 2020 Exam?

How many Vacancies Have been Announced under SSC CHSL 2020 Recruitment?