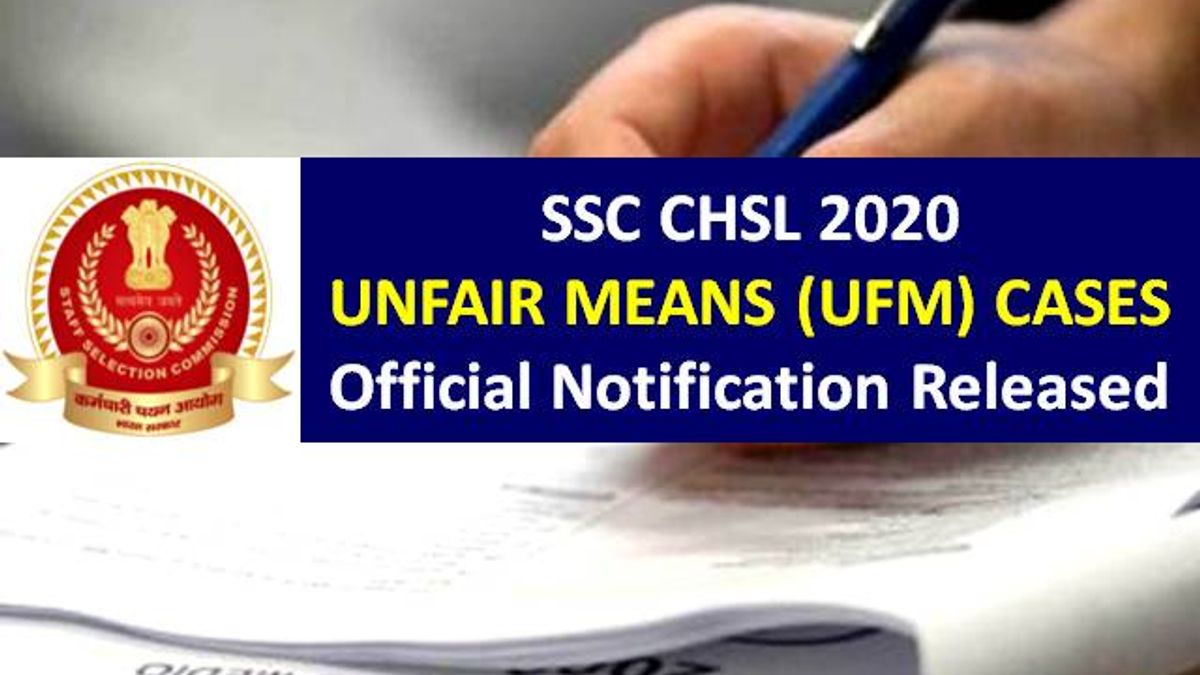 SSC CHSL UFM 2020 Official New Update-Grievance Committee has given one time exemption to 4560 Unfair Means Rule (UFM) Rejected Cases: SSC has released official notification and it states that the Committee has since submitted its report to the Commission on 16th July 2020. The Committee has, inter alia, recommended that “With regard to the candidates of Combined Higher Secondary Level (10+2) Examination T-II-2018 who have been disqualified on the basis of revealing the identity and were placed under the category of ‘UFM’, the prohibitory instructions/guidelines should be ignored as a one-time measure".

Accordingly, the Commission has decided to give one-time exemption to all 4560 candidates of Combined Higher Secondary Level (10+2) Examination (Tier-2) 2018 who were disqualified. The results of these candidates will be processed accordingly.

The Combined Higher Secondary (10+2) Level Examination-2018 (Tier-II) was conducted by the Commission on 29-09-2019. This examination was arranged for 45,101 candidates, out of which 36,112 candidates appeared in the examination. The result of the said examination was declared on 25-02-2020, wherein based on the cut-off fixed by the Commission 30,822 candidates qualified (provisionally) were shortlisted for appearing in the Tier III (Skill Test) against 5918 tentative vacancies. Among the unsuccessful candidates, 4560 candidates were disqualified on the grounds of unfair means. Here is the SSC CHSL Tier-2 2018 Result Analysis:

Many candidates have been given zero marks in SSC CHSL Tier-2 Descriptive Paper. Unfair Means (UFM) Rule for Descriptive Paper in SSC notification states that “Candidates are strictly advised not to write any personal identity e.g. name, roll number, mobile number, address, etc inside the Answer Book. The candidates who fail to adhere to these instructions will be awarded zero marks even if marks are awarded during the evaluation process”.

In addition, the following instructions were also given on the cover page of the Question-cum-Answer Book of the said examination:
“Candidates are strictly advised not to write any personal identity (real or imaginary, e.g. name, roll no, mobile no, address, etc (other than the name and address given in the question) inside the Answer Book otherwise their Answer Book will not be evaluated and they shall be awarded zero marks.”

Candidates who have been given zero marks over UFM Rule in SSC CHSL Tier-2 2018 Descriptive Paper are making complaints and requests on social media to scrap or change the rule. Here are some snapshots of tweets of candidates who faced the harsh decision of the commission over UFM Rule: 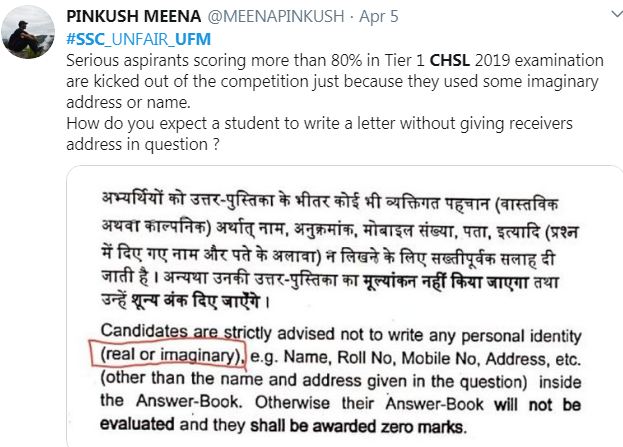 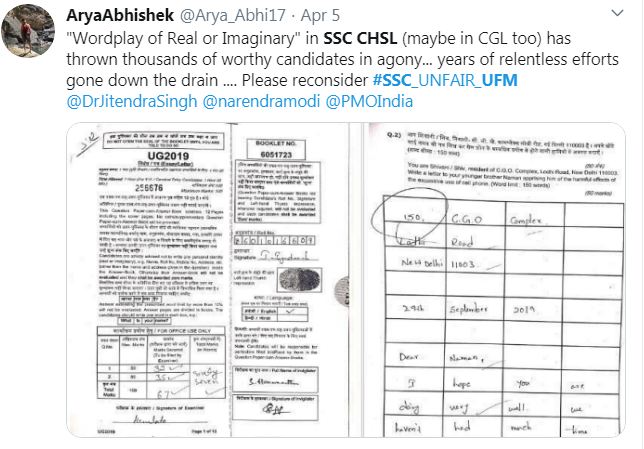 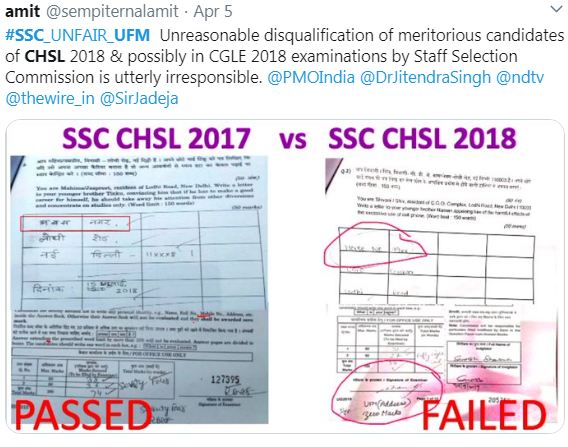 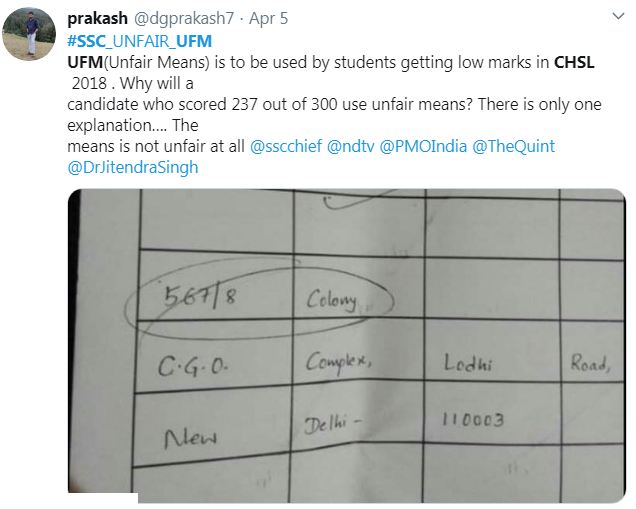 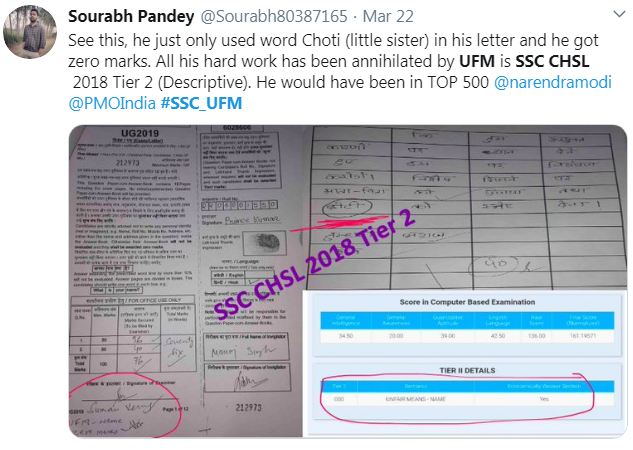 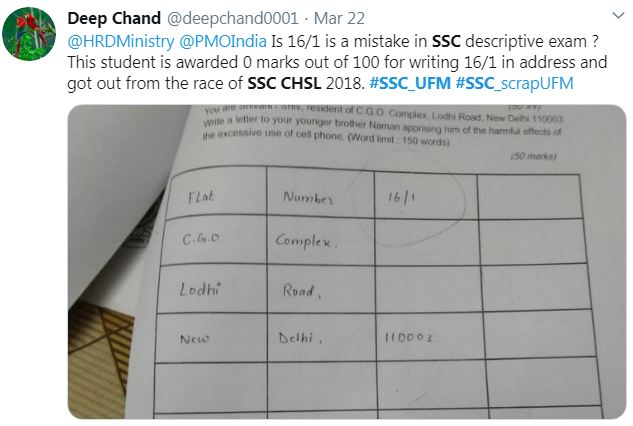 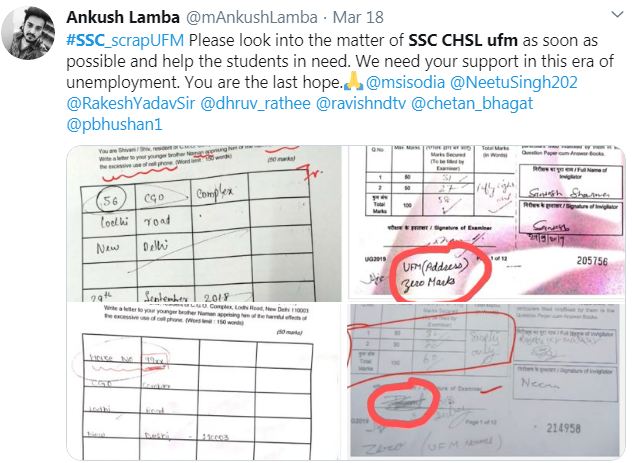 Candidates are complaining that by writing mere imaginary address and numbers on address, they have been given zero marks under UFM Rule. They have made a lot of request to the Staff Selection Commission (SSC) Officials over social media to look into the matter and give justice to the candidates who have faced the wrath of UFM Strict & Harsh Rules.