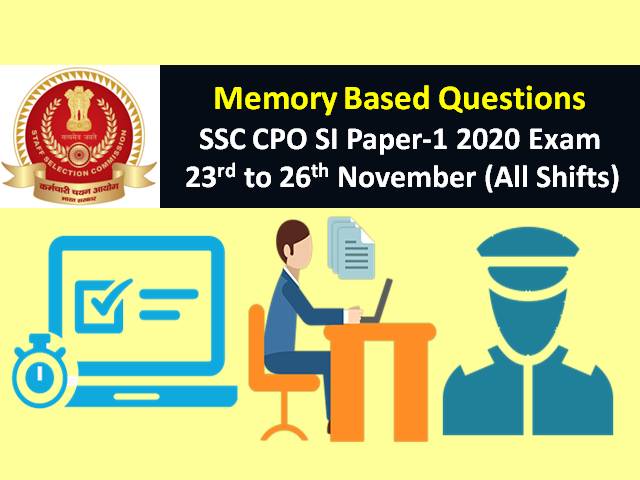 SSC CPO SI 2020 Exam Memory Based Questions with Answers: SSC CPO Sub-Inspector 2020 Paper-1 has been commenced from 23rd November and will last till 26th November 2020. In this article, we are going to share the important memory based General Awareness, General Knowledge, Current Affairs and English Questions as per the feedback received by the candidates who have appeared for SSC CPO SI 2020 Paper-1 Online Exam. Candidates are advised to definitely cover these questions for scoring high marks in the Exam. Let’s have a look at the Important Questions that are being covered in the SSC CPO SI (Sub-Inspector) 2020 Paper-1 Exam:

3. Where is the Palk Strait?

Answer: Palk Strait, an inlet of the Bay of Bengal between southeastern India and northern Sri Lanka. It is bounded on the south by Pamban Island (India), Adam's (Rama's) Bridge (a chain of shoals), the Gulf of Mannar, and Mannar Island (Sri Lanka). The southwestern portion of the strait is also called Palk Bay.

4. Where is Ashtamudi Lake located?

Answer: Kollam District of the Indian state of Kerala, is the most visited backwater and lake in the state.

5. Sutta Pitaka is a Religious Text of:

Answer: It is the second of the three divisions of the Tripitaka or Pali Canon, the Pali collection of Buddhist writings of Theravada Buddhism

1. Who won silver medal in Badminton in Asian Games 2018?

4. Headquarters of WTO located in:

5. ‘We Are Displaced’ Book written by:

6. Article 24 of Indian Constitution is related to:

Answer: Prohibition of employment of children in factories, etc. No child below the age of fourteen years shall be employed to work in any factory or mine or engaged in any other hazardous employment.

Answer: Ministry of Youth Affairs and Sports - Rajiv Gandhi Khel Ratna Award is the highest sporting award given by the Ministry of Youth Affairs and Sports for the spectacular and most outstanding performance in the field of sports by a sportsperson over a period of four years. The award comprises a medallion, a certificate, and a cash prize of Rs 7.5 lakh.

8. Venkateswara Temple is located in:

Answer: Venkateswara Temple is an important Vaishnavite temple situated in the hill town of Tirumala in Chittoor district of Andhra Pradesh, India

Answer: Bryophytes are called amphibians of the plant kingdom because these plants though live in soil but they need water for sexual reproduction.

10. Viticulture is related to:

Answer: Viticulture (from the Latin word for vine) or winegrowing (wine growing) is the cultivation and harvesting of grapes. It is a branch of the science of horticulture.

Check Job Profile, Salary Structure and Promotion Policy for the post of SSC Sub-Inspector in CAPF and Delhi Police

12. How many chapters are there in Rigveda?

14. Bathukamma Festival is celebrated in:

Answer: Bathukamma is floral festival celebrated predominantly in Telangana and some parts of Andhra Pradesh.

15. Leukemia is cancer of which body part:

Answer: Leukemia is a type of cancer that affects the body's blood-forming cells in the bone marrow and lymphatic system.

16. GST was implemented on:

18. Bangladesh was part of Pakistan for which time period?

19. SAARC First Summit was held on:

22. Govardhan Math is situated in:

23. Satish Shivlingam is related to which sports?

This section was mainly covered by Current Affairs Questions (15-20 Questions) and the rest by GK questions (20-30 Questions). Below are some memory based questions from the General Awareness & English Section of SSC CPO SI 2020 Online Exam:

1. Who was the President of India when Rajiv Gandhi became the Prime Minister of India?

2. Article 21 of the Indian Constitution is related to:

3. Which dam is located in Jharkhand?

4. Buddha did not give his preaching in which of the following place?

5. Article 49 of the Indian Constitution is related to:

Answer: Protection of monuments and places and objects of national importance.

6. Morarji Desai served as the Prime Minister of India from?

7. 52nd Dada Saheb Phalke Award was given to:

8. Polio is caused through:

Answer: Polio is transmitted through contaminated water or food, or contact with an infected person. The poliovirus spreads most often from fecal-oral contact. Usually, this occurs from poor hand washing or from the consumption of contaminated food or water. Sneezing or coughing also spreads the virus. Your child is most contagious immediately before any symptoms show up and soon after they appear.

9. Which of the following is the highest peak in Nepal?

10. Which among the following did not win the Bharat Ratna Award?

11. Smriti Mandhana is related to which sports?

12. Which predatory bird is capable of producing a wide range of calls for hunting?

14. When was Afghanistan added to SAARC countries?

Answer: In 2007, the 14th Summit conference of the South Asian Association of Regional Cooperation (SAARC) opened marking the expansion of the organisation with the formal induction of Afghanistan as its eighth member and inclusion of five other countries as observers.

15. Which the States of India share boundaries with Bangladesh?

Answer: To be depressed

Is the Sub-Inspector job suitable for Females?

20. When did Mahatma Gandhi return to India?

22. When did Namami Gange project start?