SSC Phase-8 2020 Selection Post Exam Memory Based Questions with Answers: In this article, you will get the important memory based questions from General Awareness, GK & Current Affairs Sections that came in SSC Phase-8 Selection Post 2020 Exam held on 6th & 9th November 2020. 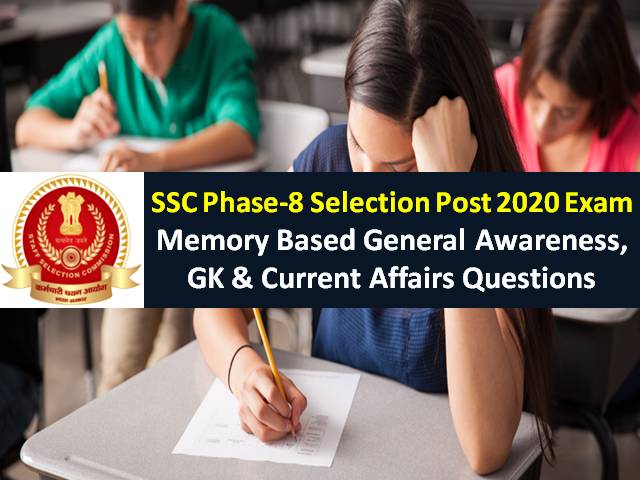 SSC Phase-8 2020 Selection Post Exam Memory Based Questions with Answers: SSC has started conducting the Phase-8 Selection Post 2020 Exam in online mode from 6th November 2020 and will also be conducted on 9th & 10th November 2020. The exam will be conducted on 14th December 2020 (only for candidates who opted for Examination Centres in Bihar). In this article, we are going to share the important Memory Based General Awareness, General Knowledge (GK), Current Affairs Questions as per the feedback shared by the candidates who have appeared for SSC Phase-8 Selection Post 2020 Exam. Candidates are advised to definitely cover these questions for scoring high marks in the Exam.

1. Arvind Gupta has been appointed as the CEO of:

Answer: In April 2020, it was reported that Secretary of State Mike Pompeo and Secretary of Defense Mark Esper have agreed to proceed with U.S. withdrawal from the Treaty on Open Skies. On May 21, 2020, President Trump announced that the United States would be withdrawing from the treaty due to alleged Russian violations.

3. Who has been appointed High Commissioner of India to the United Kingdom?

Answer: Gaitri Kumar appointed as the next High Commissioner of India to the United Kingdom.

Answer: Raghunath Temple is a Hindu temple located in Jammu in the Indian union territory of Jammu and Kashmir.

5. Ammonia is a compound of:

Answer: Ammonia is a compound of nitrogen and hydrogen with the formula NH3.

6. Which female cricketer has been given Arjuna Award recently?

10. Indian Ambassador to the Republic of Niger:

2. Oncology is related to:

Answer:  Oncology is the study of cancer.

4. Dholavira is located in which State:

Answer: Dholavira is located in the Khadir Bet Island in the Kutch district of Gujarat.

5. Chapchar Kut Festival is celebrated in which State:

8. Social Harmony Book is written by which Prime Minister of India?

11. Who is called Mozart of Madras?

13. Which vitamin is obtained through sunlight?

15. On 26th March G-20 Summit was held through video conferencing in which country?

16. Emergency Article of the Indian Constitution:

Article 352 of the Indian Constitution talks about the national emergency