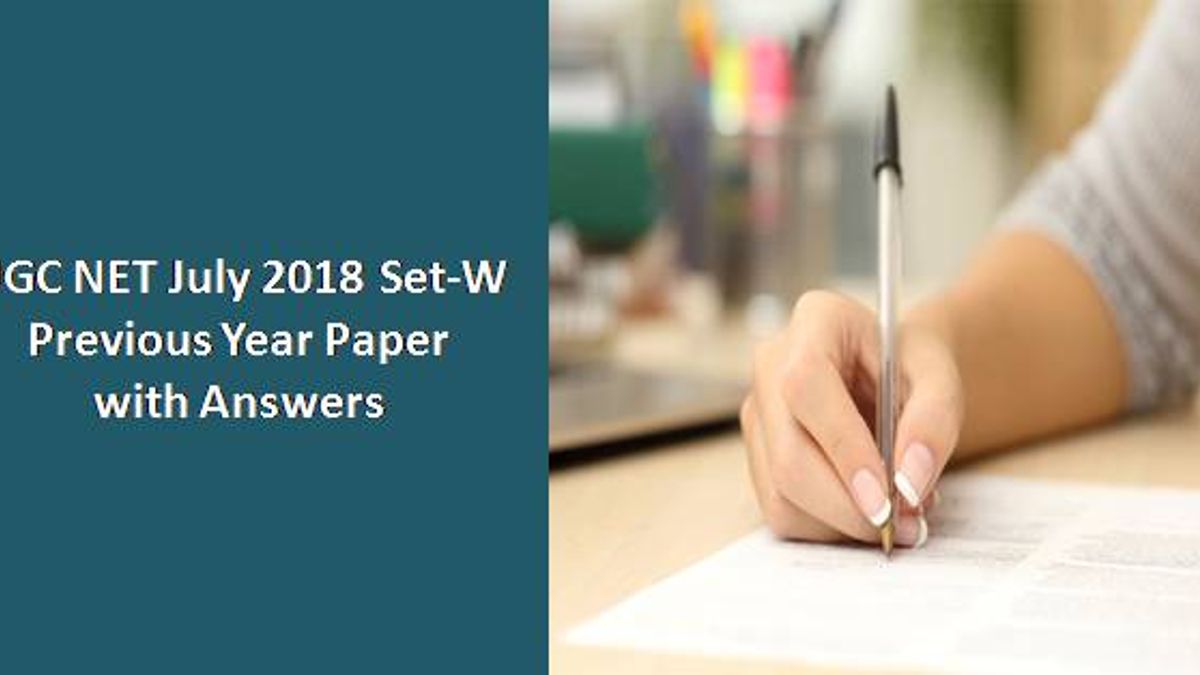 For cracking NTA UGC NET December 2019 Exam, candidates must practice the previous year papers of the different subjects for which they are applying this year. It will help them in improving their speed of attempting maximum questions in minimum time with accuracy. So, in this article we have shared the UGC NET July 2018 Paper I (Set-W) Previous Year Paper held on 22nd July, 2018 alongwith their answers.

1. From the following list of statements, select those which indicate the characteristics and basic requirements of teaching.

(vi) There can be no teaching without infrastructural support.

2. What is the purpose underlying the use of teaching aids?

(1) To make the lessons interesting

(2) To capture the students’ attention

3. In the two lists given below, List I provides the list of teaching methods, while List II indicates the factors helpful in rendering them effective. Match the two lists and choose the correct answer from the code given below.

4. Below are given statements pertaining to evaluation systems. Identify those which correctly explain them.

(i) Criterion-Referenced Testing (CRT) focuses on a delimited domain of learning tasks.

(iii) Formative tests are given at the end of a course.

5. In the list given below, identify those key teaching behaviours which have been observed to be contributive to effectiveness.

6. Identify the correct order of the following components which are interrelated in research.

(iv) Deducing the consequences of theories

(v) Methods employed to obtain them

7. In the list given below, identify those statements which correctly describe the meaning and characteristics of research.

(i) Research is a method of improving our common sense.

(ii) Deductive and inductive methods get integrated in a research process.

(iii) Research is creativity and charisma.

(iv) Research is the use of scientific method to provide answers to meaningful questions.

(v) Method of consulting and using experience is called research.

(vi) The answers provided by research can be empirically verified.

8. In the two lists given below, List I provides the types of research methods, while List II indicates the critical features associated with them. Match the two lists and choose the correct answer from the code given below.

(2) Malpractice in reporting of results

10. Which of the following provides more latitude to the researcher for creative expression?

(2) Writing of a research article

(3) Presentation of a conference paper

Read the following passage carefully and answer questions no. 11 to 15.

Some 2000 km down south of the Amazon, and about the same time when the tidal waves were at their highest as a consequence of the big clash of sea and fresh water at the Amazon delta most vigorously in March and April (2018), more than 40,000 people were talking about the power of water. Brasilia hosted the eighth edition of the World Water Forum (WWF – 8), where heads of states, civil societies and private sector gathered to discuss the present and future of mankind’s most valuable resource. This year’s theme was ‘Sharing Water’, and the government authorities expectedly put forth a political  declaration, aimed at raising awareness about threats and opportunities associated with water resources. Deliberations here would play a decisive role in the periodic assessment of the sustainable  development goals of Agenda 2030.

Brazil has established a solid institutional and legal framework for water management, based on the principle of multi-stakeholder participation. Brazil has also been conducting one of the boldest river inter-linking projects in which 500 km of canals will transfer abundant waters from the Sāo Francisco basin to small rivers and weirs in one of Brazil’s most arid areas, benefitting more than 12 million people in almost 400 municipalities. India, too, has a large variety of water resources. An institutional framework consisting of regional river boards and river cleansing missions has been set up, while successive Central Governments have made efforts to address the dire needs of irrigation and mitigation of ground water depletion. As in the case of Brazil, a lot remains to be done in India.

Adequate treatment of industrial waste-water, the fight against contamination of riverbeds and assistance to drought affected areas are high priority topics for both New Delhi and Brasilia. Due to these commonalities, there is ample room for bilateral co-operation. Water is a local, regional and global common and as such, collaboration is key to address most of its associated threats. Today, mankind is faced with two facts: water is too powerful a force to be fought over, and too valuable a resource to be lost. To harmonise these two conflicting aspects, sharing water is perhaps the only meaningful motto for the ages to come.

11. As per the text of the passage, the eighth edition of the World Water Forum was concerned with

(1) Present and future of mankind

(2) The issue of high tidal waves

(4) The role of civil society in solving water-related problems

12. Deliberations on the theme ‘Sharing Water’ should facilitate

(2) The role of private sector in preserving water resources

(3) The establishment of institutional framework

13. The institutional framework of Brazil for water management

14. What would be of high priority to both New Delhi and Brasilia as regards river water?

(1) Proposing water as a global common

(4) Fight against contamination of riverbeds

15. The main focus of the passage is on

(3) Management of water as a valuable resource

16. Given below are two statements, one labelled as Assertion (A) and the other labelled as Reason (R). Read the statements and choose the correct answer using the code given below.

Assertion (A): Meanings of messages used in the classroom are arbitrary in nature.

Reason (R): Meanings are learnt as a result of one’s prior experiences.

17. Given below are two statements, one labelled as Assertion (A) and the other labelled as Reason (R). Read the statements and choose the correct answer using the code given below.

Assertion (A): Classroom communication has a cultural dimension.

Reason (R): Beliefs, habits, customs and languages are the cultural characteristics of communication.

18. In a classroom, teachers and students use self-interest issues to judge

19. Variables that affect the information processing in a classroom are

20. Given below are two statements, one labelled as Assertion (A) and the other labelled as Reason (R). Read the statements and choose the correct answer using the code given below.

Assertion (A): Selective exposure in the classroom is dependent upon students’ perceptions and knowledge about the source of information.

Reason (R): The effectiveness of the communication source determines the selective exposure of students to information.

The charges of the taxi per km is

26. Choose the proper alternative given in the code to replace the question mark.

(i) Every fruit is nutritious.

(iv) Some food items are nutritious.

28. Given below are two premises (a) and (b). Four conclusions are drawn from them. Select the code that embodies validly drawn conclusion(s) (taking the premises individually or jointly).

(a) All saints are noble.

(b) Some religious men are saints.

(i) Some religious men are noble.

(ii) All religious men are noble.

(iii) Some saints are religious men.

(iv) All noble persons are saints.

29. Which one is not correct in the context of deductive and inductive reasoning?

(1) A deductive argument makes the claim that its conclusion is supported by its premises conclusively.

(2) A valid deductive argument may have all false premises and true conclusion.

(3) An inductive argument claims the probability of its conclusion.

(4) An inductive argument cannot provide us any new information about matters of fact.

Consider the following two tables (I and II) that indicate the percentage of employees working in various departments of an organization along with the ratio of men to women in the same departments. The total number of employees in the organization is 4600. Based on these tables I and II, answer the questions that follow (Questions no. 31 – 35):

31. What is the total number of women in the Accounts department?

32. What is the total number of employees working in the IT and HR departments together?

34. The number of women in the Purchase department forms what percentage of the total number of employees in the organization?

36. Which of the following statement(s) regarding the term ICT is/are true?

P: A digital divide is an economic and social equality with regard to access to, use of, or impact of ICT.

Choose the correct answer from the following:

37. A confidential file needs to be deleted from a workstation. Which is the most effective way to ensure this?

(2) Compress the file and back-up to tape

38. Which of the following statement(s) is/are true with regard to websites?

P: A blog is a website that consists of posts in reverse chronological order.

Q: A wiki is a website that is designed to allow people to collaborate easily.

Choose the correct answer from the following:

(2) E-mail messages that are infected with viruses

(4) Unsolicited advertising sent to a large number of recipients

40. A virus type that is capable of shifting from one computer to another without user interaction is known as a

43. Frequent episodes of dense smog in winter season in the National Capital Region (NCR) can be attributed to

46. The mandate of the University Grants Commission (UGC) includes

(i) disbursing grants to Universities and colleges

47. Which one of the following States is going to have India’s first National Rail and Transportation University?

48. The Citizen’s Charter is an instrument which seeks to make an organisation

49. The Chief Minister of a State is not eligible to vote in the Presidential election, if

(1) he/she himself/herself is a candidate

(2) he/she is a caretaker Chief Minister

(3) he/she has a criminal case pending against him/her

50. In the QS World Rankings (2018), which of the following Indian Universities is/are among the top 500 Universities?

(i) University of Delhi