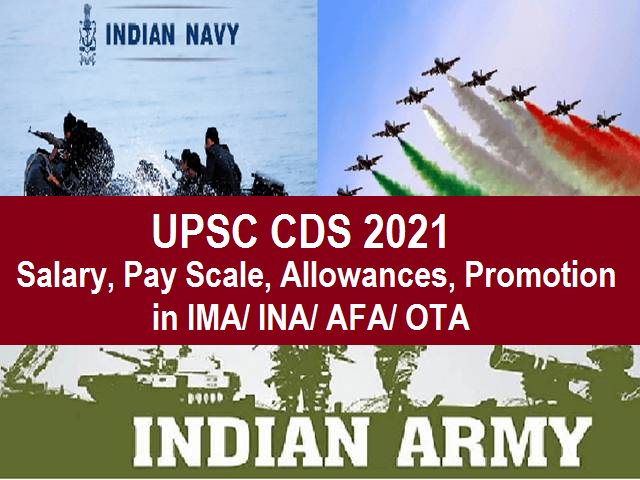 Let’s now have a look at the Salary and Pay Scale of Officers in IMA, INA, OTA and AFA:

Candidates who get admitted to Army, Navy or Air Force after clearing the UPSC CDS exam are first required to undergo Cadet Training. During the training period, the Army Officers and the equivalent post officers in Navy and Air Force are eligible to get Fixed Stipend of Rs 56,100 per month, which the starting pay in Level 10.

Apart from a decent salary package, the officers are eligible to get a few allowances such as Flying Allowance, Dearness Allowance, High Altitude allowance, Uniform Allowance, etc. Have a look at these allowances below:

The promotion avenues are different in all the armed forces. Have a look at the promotion policies for officers recruited in Indian Military, Navy, OTA and Air Force below:

Male and Female SSCOs who are granted with the Short Service Commission by the OTA are eligible for following promotion avenues:

Captain - On completion of 2 years of commissioned service

Major -  On completion of 6 years of commissioned service

Lieutenant Colonel - On completion of 13 years of commissioned service

What is entry level pay for cadets recruited through UPSC CDS Exam?

The entry level pay for officers recruited by IMA, INA, AFA or OTA is Rs 56,100 plus allowances such as DA.

Do officers recruited through CDS exam get stipend during training period?

Yes, officers get stipend of Rs 56,100 during their training period before getting commissioned in army, navy or air force.

What is the Basic Pay for officers recruited through UPSC CDS Exam?

The basic pay of an officer to the post of Lieutenant recruited through CDS exam is Rs 56,100.
Comment ()