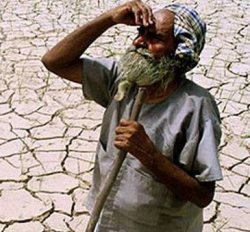 Droughts are outcome of variability of climate. Though drought causes little structural damage and has slow onset, it is considered as natural hazard. Drought in India is related to both scarcity of rainfall and water resource management.

Definition: IMD defines Drought as situation occurring in any area when mean annual rainfall is less than 75% of the normal rainfall.

Drought can be classified into three types according to National commission on agriculture in India. They are agricultural, hydrological and meteorological drought.

1.Meteorological drought:  a condition when  there is substantial decrease from usual precipitation over an area.

3.Agricultural drought: a condition when rainfall and soil moisture is deficient to support healthy growth of crop.

Based on the onset of monsoon, drought is also categorised as early season, mid season and late season drought.

Drought is not only confined to regions with deficient rainfall, it is also prevalent in regions of high rainfall. Himalayan regions are also prone to conditions of water scarcity. Worst drought in India was experienced in 2002. Probability of drought in India varies from region to region. Western Rajasthan experiences drought once in 2 years and Once in 15 years in Assam.

Distribution of drought in India

2. Conditions of severe drought: It covers 42% of total drought prone area i.e leeward side of Maidan plateau, Rayalaseema and Telengana regions of Andhra Pradesh and Marathwada and Vidarbha regions of Maharashtra.

India's irrigation is substantially groundwater and well based. Ground water contributes to 80-90% of water requirement and 50% of irrigation requirement.

Continued drought reduces water table and lowers soil moisture and decreases out plant cover. Drought increases soil temperature and decreases its humidity. Crop diversification and modification  of cultivated crops is a conventional adaptation measure  to curtail the risk of crop failure due to drought. The following startegies are suitable in drought prone area:

Drought and Social life in India

Drought is inegalitarian in its incidence. It affects farmers and animal raising people to large extent than any other socio economic groups. Droughts leads to increase in cost of food products and farm products which directly depend on water resources to large extent. In turn droughts causes increase in wage rates of skilled and educated. It widens differences in income and wealth.

Pradhan Mantri Gram Sinchai Yojana: is introduced so that more land is irrigated and ensure water supply to farmers round the year. Read in Detail

Krishi Amdani Beema Yojana: is introduced so that farmers don’t bear any financial burden if their produce gets destroyed due to unexpected weather or for any reason.