In the Civil Services IAS Prelim Examination, the CSAT paper has been made qualifying in nature from 2015 onwards. The candidates have to score at least qualifying marks in the paper but in case, if a candidate could not be able to score the required qualifying marks in CSAT Paper then his/her other papers will not be evaluated. So, it is important for the candidates to do preparation in such a manner that there must not lay them in any suspicion of underscoring.

2. If the sum of three numbers is 272 and the ratio between first and second be 2: 3 and that between second and third is 5: 3, then the second number is

3. What is the probability that there are 53 Mondays if a leap year is chosen at random?

4.Find out the number of ways in which a mixed doubles game of tennis can be arranged of 5 married couples, if no husband and wife play in the same game?

5.One of the diagonal of a rhombus is 20% less than the other diagonal. A semi-circle is described taking the smaller diagonal as diameter. What is the ratio of area of the rhombus to the area of semi-circle? 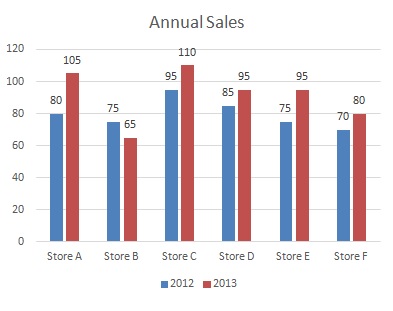 The bar graph provided below gives the sales of Music CD’s (in thousand numbers) from six stores of a Music company during two consecutive years 2012 and 2013. Answer the questions based on the graph.

6. Total sales of stores A, C and E together for both the years (in thousands) is:

8.Find the average sales (in thousands) of all the stores in the year 2012.

Directions for questions (20 -21) In each question there are two statements A and B, you have to select the correct answer from 1 to 4 depending upon the sufficiency of data given in the statements to answer the question.

d) I both the statements A and B together are not sufficient to answer the question.

11.There are two varieties of tea available in the market names as Sugandha and Suvarna the average price of Sugandha is Rs 60 per kg and that of Suvarna is 180 Rs per kg. Find the Selling price of the mixture?

Both the statements are needed to solve as the A gives the ratio in which   they are mixed and B gives the information about percentage he needs in terms of profit.