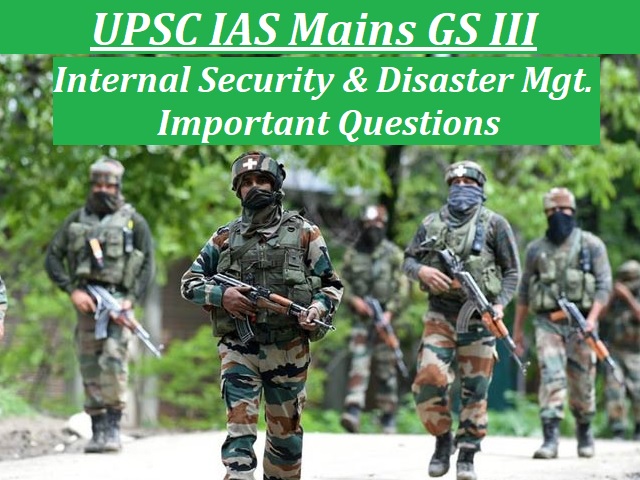 UPSC: The UPSC GS III will be conducted on January 10, 2021. GS III is divided into six sections. It is necessary for aspirants to prepare each section dedicatedly as the question paper covers questions from each topic. Aspirants can also go through previous years’ question papers to get an idea of the expected number of questions from each section. To help aspirants understand the type of questions asked in Mains exams from each subject, we have compiled a list of important questions that were previously asked in the UPSC IAS Mains papers. Candidates can solve these questions to practice answer writing.

Ques 2 What is the CyberDome Project? Explain how it can be useful in controlling internet crimes in India.

Ques 3 Indian Government has recently strengthened the anti-terrorism laws by amending the unlawful Activities (Prevention) Act (UAPA), 1967, and the NIA act. Analyze the changes in the context of the prevailing security environment while discussing the scope and reasons for opposing the UAPA by human rights organizations.

Ques 4 The cross-Border movement of insurgents is only one of the several security challenges facing the policing of the border in North-East India. Examine the various challenges currently emanating across the India-Myanmar border. Also, discuss the steps to counter the challenges.

Ques 1 Left-Wing Extremism (LWE) is showing a downward trend, but still affects many parts of the country. Briefly explain the Government of India’s approach to counter the challenges posed by LWE.

Ques 2 Data security has assumed significant importance in the digitized world due to rising cyber-crimes. The Justice B. N. Srikrishna Committee Report addresses issues related to data security. What, in your view, are the strengths and weaknesses of the Report relating to the protection of personal data in cyberspace?

Ques 3 India’s proximity to two of the world’s biggest illicit opium-growing states has enhanced her internal security concerns. Explain the linkages between drug trafficking and other illicit activities such as gunrunning, money laundering and human trafficking. What countermeasures should be taken to prevent the same?

Ques 1 Discuss the potential threats of Cyberattack and the security framework to prevent them.

Ques 2 The north-eastern region of India has been infested with insurgency for a very long time. Analyze the major reasons for the survival of armed insurgency in this region.

Ques 3 Mob violence is emerging as a serious law and order problem in India. By giving suitable examples, analyze the causes and consequences of such violence.

Ques 4 The scourge of terrorism is a grave challenge to national security. What solutions do you suggest to curb this growing menace? What are the major sources of terrorist funding?

Ques 1 The terms ‘Hot Pursuit’ and ‘Surgical Strikes’ are often used in connection with armed action against terrorist attacks. Discuss the strategic impact of such actions.

Ques 2 ‘Terrorism is emerging as a competitive industry over the last few decades.” Analyse the above statement.

Ques 3 Border management is a complex task due to difficult terrain and hostile relations with some countries. Elucidate the challenges and strategies for effective border management.

Ques 4 Use of the internet and social media by non-state actors for subversive activities is a major security concern. How have these been misused in the recent past? Suggest effective guidelines to curb the above threat.

Ques 1 Human rights activists constantly highlight the view that the Armed Forces (Special Powers) Act, 1958 (AFSPA) is a draconian act leading to cases of human rights abuses by the security forces. What sections of AFSPA are opposed by the activists? Critically evaluate the requirement with reference to the view held by the Apex Court.

Ques 2 Religious indoctrination via digital media has resulted in Indian youth joining ISIS. What is ISIS and its mission? How can ISIS be dangerous for the internal security of our country?

Ques 3 The persisting drives of the government for development of large industries in backward areas have resulted in isolating the tribal population and the farmers who face multiple displacements with Malkangiri and naxalbari foci, discuss the corrective strategies needed to win the left-wing extremism (LWE) doctrine affected citizens back into the mainstream of social and economic growth.

Ques 2 Disaster preparedness is the first step in any disaster management process. Explain how hazard zonation mapping will help disaster mitigation in the case of landslides.

Ques 1 Describe various measures taken in India for Disaster Risk Reduction (DRR) before and after signing ‘Sendai Framework for DRR (2015-2030)’. How is this framework different from ‘Hyogo Framework for Action, 2005’? (250 Words, 15 Marks)

Ques 1 In December 2004, a tsunami brought havoc on 14 countries including India. Discuss the factors responsible for the occurrence of Tsunami and its effects on life and economy. In the light of guidelines of NDMA (2010) describe the mechanisms for preparedness to reduce the risk during such events.

Ques 1 With reference to the National Disaster Management Authority (NDMA) guidelines, discuss the measures to be adopted to mitigate the impact of recent incidents of cloudbursts in many places of Uttarakhand.

Ques 1 The frequency of earthquakes appears to have increased in the Indian subcontinent. However, India’s preparedness for mitigating their impact has significant gaps. Discuss various aspects.