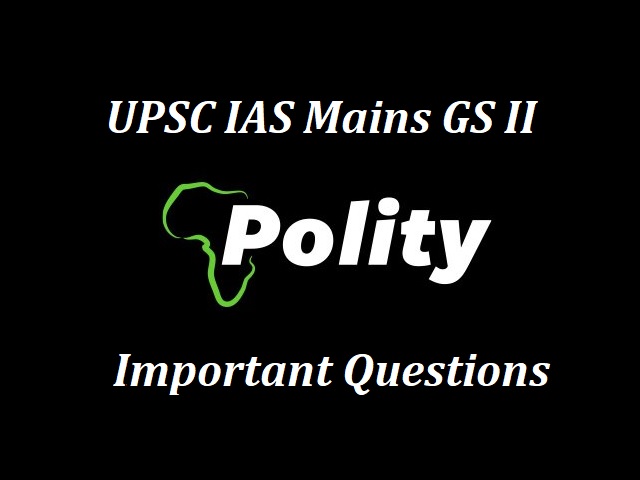 UPSC: The UPSC GS II will be conducted on January 09, 2021. GS Paper II is divided into four sections. It is necessary for aspirants to prepare each section dedicatedly as the question paper covers questions from each topic. Aspirants can also go through previous years’ question papers to get an idea of the expected number of questions from each section. General Studies II has very few direct questions which are related to one topic. This paper needs a fair share of critical thinking to answer the questions as many times interrelated topics may appear in the exam. Check here the list of important questions that were previously asked in the UPSC IAS Mains papers.

Ques 1. “The Central Administrative Tribunal which was established for redressal of grievances and complaints by or against central government employees nowadays is exercising its powers as an independent judicial authority.” Explain.

Ques 2. From the resolution of contentious issues regarding the distribution of legislative powers by the courts, ‘Principle of Federal Supremacy’ and ‘Harmonious Construction’ have emerged. Explain.

Ques 4. “The reservation of seats for women in the institution of local self-government has had a limited impact on the patriarchal character of the Indian political process”. Comment.

Ques 5. “The Attorney-General is the chief legal adviser and lawyer of the Government of India.” Discuss

Ques 6. Individual parliamentarian’s role as the national lawmaker is on a decline, which in turn, has adversely impacted the quality of debates and their outcome. Discuss.

Ques 8. What can France learn from the Indian Constitution’s approach to secularism?

Ques 1. In the light of recent controversy regarding the use of Electronic Voting Machines (EVM), what are the challenges before the Election Commission of India to ensure the trustworthiness of elections in India?

Ques 3. Under what circumstances can the Financial Emergency be proclaimed by the President of India? What consequences follow when such a declaration remains in force? (10)

Ques 4. Why do you think the committees are considered to be useful for parliamentary work? Discuss, in this context, the role of the Estimates Committee. (10)

Ques 5. “The Comptroller and Auditor General (CAG) has a very vital role to play.” Explain how this is reflected in the method and terms of his appointment as well as the range of powers he can exercise. (10)

Ques 6. Individual parliamentarian’s role as the national lawmaker is on a decline, which in turn, has adversely impacted the quality of debates and their outcome. Discuss.

Q7. Whether the Supreme Court Judgement (July 2018) can settle the political tussle between the Lt. Governor and elected government of Delhi? Examine.

Ques 8. How far do you agree with the view that tribunals curtail the jurisdiction of ordinary courts? In view of the above, discuss the constitutional validity and competency of the tribunals in India.

Ques 10. Assess the importance of the Panchayat system in India as a part of local government. Apart from government grants, what sources the Panchayats can look out for financing developmental projects?

Ques 1. “The local self-government system in India has not proved to be an effective instrument of governance”. Critically examine the statement and give your views to improve the situation. (150 words)

Ques 2. Critically examine the Supreme Court’s judgement on ‘National Judicial Appointments Commission Act, 2014’ with reference to the appointment of judges of higher judiciary in India. (150 words)

Ques 3. Discuss the role of the Public Accounts Committee in establishing accountability of the government to the people. (150 words)

Ques 4. Examine the scope of Fundamental Rights in the light of the latest judgment of the Supreme Court on Right to Privacy. (250 words)

Ques 5. To enhance the quality of democracy in India the Election Commission of India has proposed electoral reforms in 2016. What are the suggested reforms and how far are they significant to make democracy successful? (250 words)

Ques 6. Is the National Commission for Women able to strategize and tackle the problems that women face at both public and private spheres? Give reasons in support of your answer. (250 words)

Ques 7. Explain the salient features of the constitution(One Hundred and First Amendment) Act, 2016. Do you think it is efficacious enough ‘to remove the cascading effect of taxes and provide for common national market for goods and services’? (250 words)

Ques 8. The Indian Constitution has provisions for holding joint sessions of the two houses of the Parliament. Enumerate the occasions when this would normally happen and also the occasions when it cannot, with reasons thereof. (250 words)

Ques 1. Discuss the essentials of the 69th Constitutional Amendment Act and anomalies, if any, that have led to recent reported conflicts between the elected representatives and the institution of the Lieutenant Governor in the administration of Delhi. Do you think that this will give rise to a new trend in the functioning of the Indian federal politics?

Ques 2. To what extent is Article 370 of the Indian Constitution, bearing marginal note “temporary provision with respect to the State of Jammu and Kashmir”, temporary? Discuss the future prospects of this provision in the context of Indian polity.

Ques 3. Discuss each adjective attached to the word ‘Republic’ in the ‘Preamble’. Are they defendable in the present circumstances?

Ques 4. What was held in the Coelho case? In this context, can you say that judicial review is of key importance amongst the basic features of the Constitution?

Ques 5. “The Indian party system is passing through a phase of transition which looks to be full of contradictions and paradoxes.” Discuss.

Ques 6. Exercise of CAG’s powers in relation to the accounts of the Union and the States is derived from Article 149 of the Indian Constitution. Discuss whether an audit of the Government’s policy implementation could amount to overstepping its own (CAG) jurisdiction.

Ques 7. Did the Government of India Act, 1935 lay down a federal constitution? Discuss.

Ques 8. What is a quasi-judicial body? Explain with the help of concrete examples.

Ques 1. What are the methods used by the farmer’s organizations to influence the policy-makers in India and how effective are these methods?

Ques 2. Implementation of Information and Communication Technology (ICT) based projects/programmes usually suffers in terms of certain vital factors. Identify these factors and suggest measures for their effective implementation.

Ques 3. On what grounds a people’s representative can be disqualified under the representation of people act, 1951? Also, mention the remedies available to such a person against his disqualification.

Ques 4. ‘In the context of the neo-liberal paradigm of developmental planning, multi-level planning is expected to make operations cost-effective and remove many implementation blockages’- Discuss

Ques 5. The need for cooperation among various service sectors has been an inherent component of development discourse. Partnership bridges the gap among the sectors. It also sets in motion a culture of ‘collaboration’ and ‘team spirit’. In the light of statements above examine India’s development process.

Ques 6. Performance of welfare schemes that are implemented for vulnerable sections is not so effective due to the absence of their awareness and active involvement at all stages of the policy process. Discuss

Ques 1. “Policy contradictions among various competing sectors and stakeholders have resulted in inadequate protection and prevention of degradation to the environment.” Comment with relevant illustrations.

Ques 2. E-governance is not only about the utilization of the power of new technology, but also much about the critical importance of the ‘use-value’ of information.

Ques 3. How far do you agree with the view that the focus on lack of availability of food as the main cause of hunger takes the attention away from ineffective human development policies in India?

Ques 1. ‘Simultaneous election to the Lok Sabha and the State Assemblies will limit the amount of time and money spent in electioneering but it will reduce the government’s accountability to the people’ Discuss. (150 words)

Ques 2. ‘To ensure effective implementation of policies addressing water, sanitation and hygiene needs, the identification of beneficiary segments is to be synchronized with the anticipated outcomes’ Examine the statement in the context of the WASH scheme. (150 words)

Ques 3. Does the Rights of Persons with Disabilities Act, 2016 ensure an effective mechanism for empowerment and inclusion of the intended beneficiaries in the society? Discuss (150 words)

Ques 4. Hunger and Poverty are the biggest challenges for good governance in India still today. Evaluate how far successive governments have progressed in dealing with these humongous problems. Suggest measures for improvement. (150 words)

Ques 5. ‘Poverty Alleviation Programmes in India remain mere show pieces until and unless they are backed by political will’. Discuss with reference to the performance of the major poverty alleviation programmes in India. (250 words)

Ques 1. “In the Indian governance system, the role of non-state actors has been only marginal.” Critically examine this statement.

Ques 2. “Effectiveness of the government system at various levels and people’s participation in the governance system are interdependent” Discuss their relationship in the context of India.

Ques 3. Has the Indian governmental system responded adequately to the demands of Liberalization, Privatization and Globalization started in 1991? What can the government do to be responsive to this important change?

Ques 4. Examine the main provisions of the National Child Policy and throw light on the status of its implementation.