Check 10 most important questions on the Climatology topic of Indian Geography. Aspirants of UPSC Civil Services Prelims 2021 exams can solve these questions to test their knowledge on this topic of Geography. 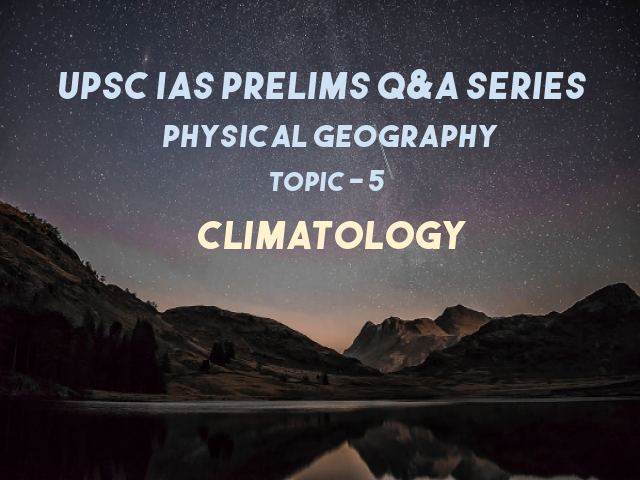 Climatology is one of the most important components of the UPSC Geography Prelims syllabus. You can expect at least 3-4 questions in the Prelims exam from the Physical geography section. Climatology is studied in various fields of science from geography, environment to ecology. Questions on this topic are often asked in the UPSC IAS Prelims exam. To help the aspirants in their preparation, we have provided the 10 most important questions from the Climatology topic of Indian Geography for UPSC Prelims 2021.

Ques 1: The air that contains moisture to its full capacity :

Ques 4: What do you understand by Storm Surge?

(a) It is an abnormal rise of sea level near the coast caused by a severe tropical cyclone.

(b) It is mid-latitude depressions, temperate cyclones, frontal depressions and wave cyclones.

(c) It is an abnormal rise of sea level near the coast caused by a severe tropical cyclone.

(d) It is any low-pressure area with winds spiralling inwards.

Ques 5: Examine the following statements and select the correct answer using the code given below.

Ques 6: What is the exact sequence of atmospheric layers in ascending order from the surface of the earth?

Ques 7: Which of the following fact about dust particles in the atmosphere is/are correct?

III. They have no role in the apparent colour of the sky.

(a) Solar radiation absorbed by the earth's surface.

(b) Solar radiation absorbed by the atmosphere.

(c) Solar radiation reflected back by the earth's surface to the space.

(d) Ratio between the total solar radiation falling upon a surface and amount reflected in percentage,

Ques 9: Which of the following is/are the consequences of El-Nino?

Select the correct answer from the following codes

Select the correct answer from the following codes

Also Check: How to Study Indian and World Geography Through Maps?